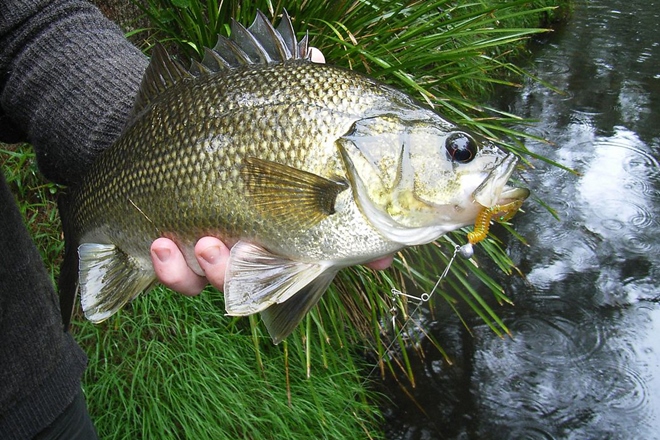 THE intensity of aggressive interactions between one of the nation’s most popular angling fish, Australian bass, and the invasive eastern mosquitofish, are dependent on the interplay between water temperature and salinity, a study by University of Wollongong PhD student Laura Lopez has revealed. Her findings provide valuable new insights towards efforts to preserve estuarine ecology, and the enjoyment of recreational anglers, through stocking of Australian bass in coastal rivers and estuaries along the nation’s east coast. Natural numbers of Australian bass – a predatory native fish – have declined since the damming of rivers in key habitat areas, which has prevented the migration of bass to estuaries for breeding and maturation.

Hatchery-reared juvenile bass of 2.5-3cm in length are therefore routinely restocked into traditional habitats by primary industry departments and private landholders. Yet how these young bass interact with the aggressive behaviours of the pest eastern mosquitofish, endemic to the same coastal river and estuary environments, is not well understood. Both fish are aggressive in nature, with the mosquitofish reputed for physical interactions including nipping other fish. As well, mosquitofish compete with bass, among other species, for access to food and habitat.

As part of her PhD studies, Laura set out to uncover more information about how the mosquitofish compromises the survival of Australian bass, and how environmental variables such as water temperature and salinity influence interactions between the two species. She undertook experiments on temperature, salinity and density in the UOW fish labs, as well as field experiments on fish density at a field site with access provided by Boral Sand and Soil at Dunmore, near Shellharbour. Laura’s main finding was that temperature and salinity did regulate the intensity of aggressive behaviours between the two species.

“We found that at a higher water temperature the two fish were more aggressive towards each other, but that higher salinity could mediate that effect and reduce aggression,” Laura said. “If aggression is reduced, it’s more likely that the juvenile bass will survive to grow and mature, which is important both ecologically, as they are a predatory fish, and commercially, as they’re a really popular sportfish.” Her investigations of how fish density may affect the number and intensity of interactions between the two species showed that when there is a higher density of mosquitofish the bass are at the receiving end of more aggression – but it wasn’t a statistically significant increase.

“However, mosquitofish didn’t reduce the growth or survival of bass fingerlings in the field, though this is likely to change with water temperature,” Laura said. “The really interesting finding from the density studies was that we actually saw the bass returning the mosquitofish aggression. “The bass seem to be able to adapt quickly to the aggression they’re receiving.”

Despite this, there is as yet no evidence that bass could act as a control measure for mosquitofish, either through counter aggression or consuming the mosquitofish. Laura’s research, supervised by Dr Marian Wong and Prof Andy Davis, was supported by the NSW Department of Primary Industries Fishing Trust and industry partner Boral Sand and Soil. It is part of her PhD studies, which are examining interactions between introduced and native freshwater fishes in the face of a changing climate. She hopes to continue her research with government and industry partners on bass and invasive species and provide further insights for stocking management of the bass.