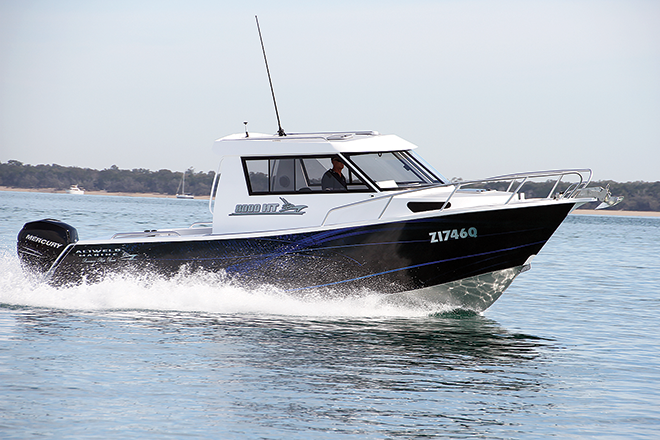 Aliweld Marine hull a proven performer. Easy to handle for an 8m boat and gets along very well with a 350hp Mercury Verado on the back.

DO you dream of catching big offshore fish? If so, chances are you’ll want a big boat suited to safely handling the often-unpredictable offshore conditions. Enter the Aliweld Marine 8000 HT.

I recently had the pleasure of ‘testing’ this big rig in Moreton Bay. Unfortunately, while it can be a messy waterway in the wrong conditions, on the test day Moreton Bay was a glassed-out paradise. So, while it was going to be tough to find a challenge in the bay for the 8000 HT, I knew the test would provide a good idea of the boat’s capabilities overall as well as allow me the chance to acclimatise with the largest boat I’d ever tested.

But first, who is Aliweld? The Virginia-based Aliweld Group has long been associated with the marine industry (over 25 years), with Aliweld Marine building everything from 4-15m plate alloy boats to 80m-long car and passenger ferries and even Brisbane City Council’s CityCats. The latest trailerable plate alloy boats are built upon a naval architect-designed hull and all boats can be built to survey spec.

With such boatbuilding pedigree, it should come as no surprise the 8000 HT is built like a tank. The entire hull is constructed from 5083 marine-grade aluminium, with the bottom sheets a whopping 6mm thick and the sides and floor 4mm. This particular rig’s massive hard top and cabin is also built from high-quality 5052 3mm aluminium and under the sealed, self-draining deck is foam flotation, ensuring no weak points throughout the boat.

An overall length of 8m is to be expected given the name, while a 2.48m beam ensures the boat is not over width on the trailer. Despite the cavernous cabin and hard top commanding more than half the 8000 HT’s overall length, fishing room is not compromised, with loads of space for four or five fishos down the back and along the sides.

The perks of an 8m boat, hey? The side decks are wide and afford easy access to the bow, walking on non-slip material all the way and with large bow rails to brace against and a grab handle on the hard top to hang onto. Once at the bow, you’ll notice the roof is also coated in non-slip material, and if you choose to go for a quick dip, it’s a cinch to jump up onto the roof to take in some rays and dry off.

The solid 3mm construction of the hard top means one or two people chilling out on the top deck isn’t a problem.

Three tinted pop-up hatches, two in the hard top and one in the cabin, allow extra sunlight into the covered areas and can be opened to afford extra ventilation on those balmy days and nights spent moored in sheltered anchorages.

Sitting in the super-comfy captain’s chair built by Relaxn, the outstanding all-round view is thanks in part to a 6mm-thick toughened curved glass windscreen, with the sliding side windows manufactured from the same stuff. As Bevan from Aliweld so aptly put it: “It’s like sitting in your car and driving along the highway.”

Speaking of which, the Aliweld Marine 8000 HT effectively turns the ocean into your highway with a massive 480-litre underfloor fuel tank and the cruising fuel economy of the test boat’s 350hp Mercury Verado. This is the maximum rated horsepower for the 8000 HT, and cruising through Moreton Bay at 53km/h we were using about 43 litres of fuel per hour.

You can do the maths on that one, but suffice to say, the world is your oyster in terms of cruising range. Seeing the Aliweld 8000 HT pull up at the ramp, I actually thought the boat might be a touch underpowered with the single 350hp Verado, but this was far from the case.
Getting up on the plane occurred with just a steady surge of power and a deep growl from the big Mercury, and we quickly found ourselves humming along at a maximum speed of 71km/h.

However, the Aliweld team is not 100 percent happy with the prop on the Verado, so after a prop change the team expects to see the big girl wind out closer to 80km/h. As much as I’d love twin 175hp motors on this rig for long-range reliability reasons, the big single makes sense for a number of reasons: a smaller fuel bill; a quieter ride (Bevan and I were able to converse with just barely raised voices); a slightly cheaper initial price; and lower ongoing servicing costs.

Indeed, considering the incredibly reliable and well-proven technology packed into today’s crop of four-stroke outboards, there’s an ever-decreasing chance of something going drastically wrong at sea. As mentioned, we’d picked a picture-perfect day to take the Aliweld Marine 8000 HT out on the bay, and really we would need to get into the bar or offshore to give the boat a true test, though time constraints meant that wasn’t possible on this day.

However, it was noticeable from the outset that the 8000 HT had an exceptionally cosseting ride as we literally flattened the wakes of lesser boats on our way towards Dunwich. There’s no need to back off the throttle when tackling a wake in this boat.
I even found the wake of a large catamaran and lined up the front quarter of the big Aliweld to take it on, which can often expose weaknesses in a boat’s hull design. Not this time.

The Aliweld Marine 8000 HT just tore through the substantial waves and carried on its way like nothing had happened. Needless to say, you’ll always remain dry, no matter what you put this boat through, with big reverse chines pumping any spray well away from the hull and the full hard top making it impossible for any water to reach the captain’s chair.

Man, I would love to give this thing a run out to the continental shelf to chase some big ooglies of the deep. I reckon it would lap that trip up, regardless of the conditions.

While I appreciated the clean and clutter-free layout of the test boat, with a real cabin that offered genuine sleeping accommodation for two people, Aliweld Marine is a custom boatbuilding outfit, meaning if there’s something you want on your boat, all you have to do is ask. This particular boat was destined for a customer whose request was for a boat perfect for touring with the family, rather than harassing the fish populations off the coast.

Hence the lack of a rocket launcher on the top deck, bait board, live bait tank and all the other things you might normally expect in a serious offshore fishing boat. Resting on the stern and looking forward into the cabin, you take in the classy marine carpet layering everything from the floor to the underside of the hard top, the sleeping quarters and even the interesting passenger lounge arrangement, replete with acres of storage under the comfy cushions.

Storage is literally everywhere, with every little nook and cranny repurposed for holding gear and gadgets, usually with a carpet lining to help prevent things sliding around while under way. Of course, I could go on all day about the features and unique fit-out of the 8000 HT tested, but that’s just it – it’s a unique boat, and yours will be too.

Other than the basic hull design, everything on an Aliweld is open to customisation. If you want it, the team will build it. So if you’ve got an idea of the boat you want, whether 4m or 15m long or anywhere in between, give Aliweld Marine a call on 07 3265 2165 to bring your dreams to life.

Visit facebook.com/aluminiumweldingaustralia to stay up to date.

On-water video to be added shortly.

Daniel is BNB's subeditor and occasional fish-wrangler. If you've got a great story or at least an idea for one, flick Dan an email at editorial@bnbfishing.com.au
Previous Shimano Curado K baitcaster reel
Next Aerial shark surveillance under way for NSW school holidays