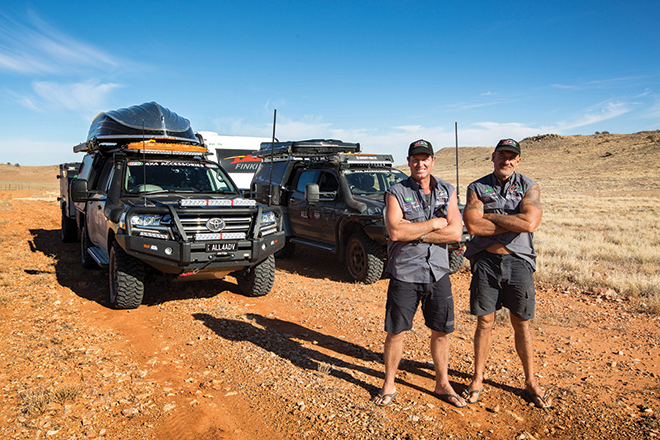 All 4 Adventure Season 10 – A Decade of Dirt

AUSTRALIA’S premier outdoor and adventure program All 4 Adventure has hit 10 years on the air.

Season 10, ‘A Decade of Dirt’, marks the best and most challenging season ever for show host Jase Andrews. Facing near-death at the barb of a stingray and having successfully mounted the latest expedition to find Dick Smith’s lost plaque near the site of the downed Kookaburra exploration plane, this is Jase’s favourite season yet.

n season 10, Jase, along with his right-hand man Simon and new mate Jesse, faced some of the most unforgiving terrains in the world. They suffered tyre punctures almost every 100m on overlanding expeditions that spanned for dozens of kilometres at a time. Perhaps the most dangerous moment was Jase’s near-fatal encounter with a bluespotted stingray, one of Australia’s deadliest.

But through the near-death experiences, epic fishing, mad four-wheel-driving, history uncovered and sights seen, it’s all been worth it. “I’ve put a lot of blood, sweat and tears into All 4 Adventure,” Jase said. “We started off raw – nothing but a Handycam and a thirst for the outback. “Now we’re the number-one rated outdoor, fishing, four-wheel-driving and adventure show in Australia and that’s bloody all right with me!”

A Decade of Dirt is jam-packed with awe-inspiring moments. “One of the more special moments in season 10 was the privilege of seeing the Magalindi secret waterfall,” Jase said. “Very few people in recent times have had the privilege of seeing it, so it was an honour to go with the blessing of the traditional owner and see this sacred spot.  “I thank the traditional owner for sharing that experience with us.”

This season, the boys set off to the Tanami Desert in search of the Kookaburra plane wreck and the lost plaque laid by renowned Australian business icon and adventurer Dick Smith in 1977.  Dick first laid this plaque on his failed attempt to find the Kookaburra, which is the site where the two pilots had perished roughly 70 years ago and spent years trying to track it down.

At Dick’s request, using an old photograph and some crude co-ordinates, Jase and his crew found the lost plaque after 40 years. Dick Smith was moved by Jase and his team’s act of courage and is set to receive his plaque from them for restoration and historical preservation purposes. Dick called the boys “Australia’s greatest adventurers alive today”.

A Decade of Dirt boasts lost World War II history rediscovered, stunning landscapes and the penultimate display of mateship. All 4 Adventure season 10, A Decade of Dirt airs at 1pm Sundays on Channel TEN.

For more information on All 4 Adventure, visit all4adventure.com