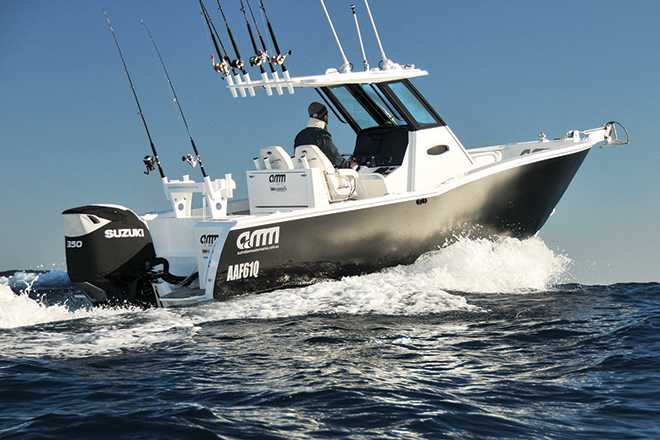 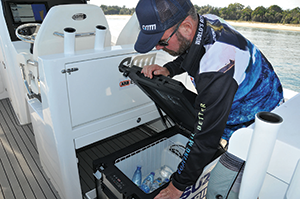 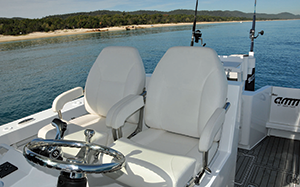 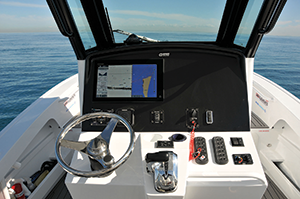 The result is one of the most awesome fishing platforms ever seen in an offshore plate alloy boat range. AMM’s proven 7m hull, which also underpins its cruiser-oriented Tournament and Weekender half cabin models, has been reconfigured to now include the option of a massive downstairs storage area incorporating an electric flushing toilet.

With full-height headroom and a cavernous storage recess that helps shape a sundeck pad topside, AMM’s Halo version of the 7000 series centre console is now a step higher up the food chain when it comes to chasing offshore predators. The boat has an entirely new design of hard top with a rigid perimeter framing adding major strength to an otherwise lightweight design.

The concept is virtually a cantilever design, which reduces obstructions on the sides and weight up high. AMM director Barton Thomas designed the new hull and said the brilliant white hard top seems to ‘float’ above the darkened windscreen made of toughened glass. “The design is very sound and doesn’t require any rear bracing struts for support, and therefore makes the hard top look like a protective, floating halo,” he said.

“The new design also provides for a more efficient deck area and with less mass and leverage up high, meaning a more stable fishing platform. “People familiar with the AMM centre console design will immediately recognise its vastly different shape – it’s larger and longer, but less obtrusive into the side decks. “Pushing the front of the console forward provides a more raked, sportier design and has allowed us to create a sundeck step.

“It’s a fantastic topside leisure space and enables a massive storage area, with full standing headroom, to be created downstairs. “It’s now a far better blend of plush comfort and offshore fishing practicality. “We’ve also considered at length how to best manage an efficient air flow to the toilet and storage area while also ensuring the watertight integrity of the space.

“An off-the-shelf Vetus opening hatch window with an insect screen provided a simple, stylish but very practical solution.” Premium contoured seats with folding bolsters, the incorporation of a new work area featuring the option of an ARB Elements fridge/freezer that slides out on rails from a storage area, a full-width slide-out lined tackle tray and an aft-facing drop-down seat further integrate comfort with practicality.

“We’ve even set four rod holders into the top of the rear seat console to make them instantly accessible,” Barton said. “One or more of these lower rod holders can also be used to keep fishing pliers, lip gripper devices or a fish donger very handy.” The helm and hull sides feature a new two-pac satin black colour scheme that has been mistaken by observers for black chrome, vinyl wrap and various other finishes.

“It’s a difficult treatment to apply but gives a sensational, classy finish,” Barton said. Blistering performance in the chop was another key design criterion and helps explain why the 7m centre console was fitted with a dual-prop 350hp V6 Suzuki outboard that in early sea trials had the boat recording better than 46 knots.

“The contra-rotating dual props launch it straight onto the plane when the throttle is pushed forwards and the amount of thrust available in reverse is phenomenal – it makes putting the stern in an exact spot an ultra-easy exercise,” Barton said.  Range is extensive with two 300-litre fuel tanks underfloor in a self-contained cell replacing the single 240-litre underfloor tank that traditionally has been packaged with AMM’s 7m hulls.

And to ensure the skipper will be in full control at high speed, the console has been configured to have the steering wheel on its port side, with the throttle assembly in the middle of the console. “That way the skipper can be directly behind the steering wheel and not offset slightly to the starboard side, in order to be able to access side-mounted console controls,” Barton said.

“It gives the skipper and console passenger far better ergonomics as well as a far cleaner and unobstructed line down both sides of the boat – no bumping into important controls when passengers move around.” Reflecting the demands of extended offshore trips, the rig has been fitted with two kill boxes, both of which incorporate their own integrated electric water pumps and macerators to allow a seawater slurry to be refreshed when transiting fishing spots.

There’s also the option of a 300-litre fully insulated underfloor icebox that also has its own integrated electric water pump and macerator. As well as AMM’s extensive list of standard features including a self-draining deck, duckboards and wide side decks, the 7000 Halo offshore centre console has a virtual catalogue of options ranging from a free-fall anchor winch to a transparent window in the 130-litre live bait tank.

The list features items such as a versatile Fusion sound system that can be Bluetoothed with mobile phones or linked to compatible NMEA-backbone sounders and plotters, a special Hella lighting package that includes a new hardtop-mounted Sea Hawk light bar and a Sea Hawk work light. Blue underwater lighting is provided to fill the dual roles of attracting bait and providing mood lighting.

A mounting plate has been incorporated into the foredeck to accommodate a bow-mounted electric trolling motor; there’s an upgraded built-in foam flotation package and also colour-co-ordinated Ultralon flooring available.