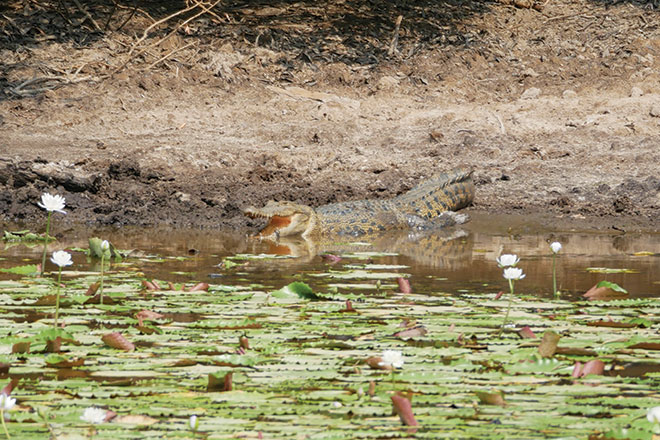 An estuarine crocodile cooling its head by lying with its jaws agape. This animal is in a freshwater billabong and probably feeds largely on feral pigs that come to drink.

The saltwater crocodile is a large and opportunistic hypercarnivorous apex predator.

It ambushes most of its prey and then drowns or swallows it whole.

It is capable of prevailing over almost any animal that enters its territory, including other apex predators such as sharks, varieties of freshwater and saltwater fish including pelagic species, invertebrates such as crustaceans, various reptiles, birds, and mammals, including humans.

The following was prepared by Barry Lyon in April 2022.

Barry has a master’s degree in Wildlife Ecology, a diploma in Conservation and Land Management and was a ranger with Queensland Parks and Wildlife Service and Australia Zoo.

The estuarine crocodile – crocodylus porosus – is the world’s largest living reptile and has a coastal and sub coastal distribution across northern Australia, from approximately Broome in Western Australia to the Gladstone and Mary River area in Queensland.

‘Salties’, as the species are sometimes known, live in both salt and freshwater habitats – including river and creeks, billabong, swamps and dams, and along coastlines and around islands.

Males grow larger than females and may reach 6m or more in length, females up to 3.8m.

Crocodiles possess a number of features that make them superb predators.

These includes a transparent eyelid that helps with underwater vision, a body design that creates minimal disturbance when swimming, highly sensitive scales that can detect nearby movement in the water and an even more sensitive organ along the jaw, and possess extremely powerful jaw pressure.

Salt is excluded by lingual glands in the jaws and the scutes along the back and tail act as solar panels, heating blood vessels contained within that are then moved around the crocodile’s body.

Crocodiles may lay on the bank with jaws agape to maintain a steady head temperature.

A gular fold or flap at the back of the throat remains closed when the crocodile attacks prey underwater – they must come to the surface to actually eat.

Estuarine crocodiles are distinguished from the much smaller, and generally harmless unless interfered with, freshwater crocodile crocodylus johnstoni by a much broader head.

Crocodiles will eat any prey they are able to catch and overwhelm.

This ranges from small fish and other aquatic animals with juveniles, to large fish, wallabies, pigs, dogs and even cattle with large crocodiles.

While hunting maybe opportunistic, crocodiles are also adept at discerning habitual behaviour of their prey, for example recognising where animals come to drink at the water’s edge and targeting them.

Recent research in the Wenlock River by the University of Queensland and Australia Zoo has shown that many large mature male crocodiles occupy distinct home ranges, while others are nomads, continually moving around, even between different river systems.

Mature females generally have a distinct home range, which they will leave however to nest.

Nesting involves laying eggs in a mound of soil and grass and other vegetative material scratched up near a river bank or within a swamp.

The female guards the nest during incubation, carries the juveniles to the water’s edge upon hatching, and also stays near the young for some weeks to provide a level of protection.

Crocodiles are apex predators of their habitats, and though the relationships involved are not yet fully understood, they are vital in maintaining the ecological health of the habitats they occupy.