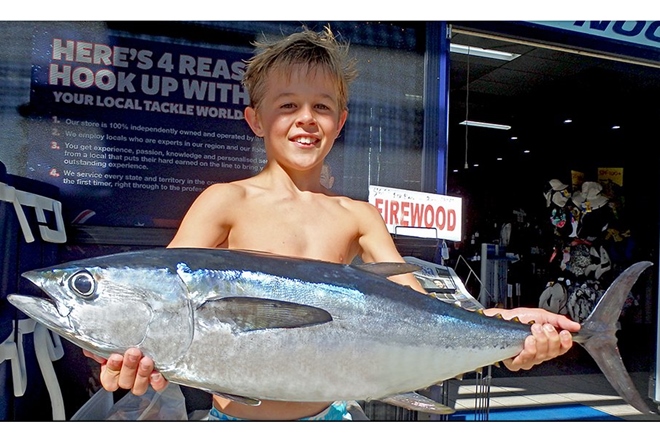 Local lad Gus Anderssen is pictured above with a 6kg longtail tuna which he boated at Hall's Reef around 9.00am on Sunday morning. It went for a cast metal slug lure. Photo: www.fishingnoosa.com.au

Anglers get offshore on Sunshine Coast

The time has finally come where we have had some good weather opportunities to get offshore. The best times seem to be in the morning, with the wind tending to pick up later in the day and dropping at sunset. Sunshine Reef has again featured highly on the hit list of smaller boat owner with plenty of quality reef fish hitting the decks, coral trout and grassy sweetlip have been abundance. Squire, pearl perch, maori cod have also been in good numbers. Strip baits on paternoster rigs and live baits with a running ball sinker rig have been very successful on the reefies.  Bait fish have been abundant with plenty of Spanish Mackerel and tuna being caught on slugs cast around feeding schools. Getting to the north of the schools seems to be the best bet as they tend to feed to the north, work the edges of the schools as this will see you get more than one cast into them before they get spooked. Halls reef and Jew Sholes have also been worth a look with some nice snapper and cod as well as the pelagic’s coming from both reefs. Up on North Reef in has all been about the afternoon bite with plenty of quality reef fish on offer including snapper, pearlies and trag jew in good numbers. For those in bigger boat a run to the Hards or the Barwon Banks has been worth the effort, fishing the deeper sides of these reefs has seen a good haul of snapper, pearlies and quality goldband. Some big amberjack are also in play and have been smashing jigs, these fish pull like a train with plenty of angler finding themselves under gunned breaking rods and hearts.

With some decent weather last weekend the amount of boat traffic on the Noosa River has greatly increased. Getting out early was the key.  Fishing the mouth of the river is the place to get a great feed of whiting, these feisty little fish punch well above their weight and are great on light gear.  The best grounds are the shallow sand bank and bars on the incoming tide with the fish come up to feed on worms yabbies and peeled prawns. Elsewhere in the river, Woods Bays has again been the place to be with some nice tailor and trevally reported as they chase the bait in on the incoming tide, soft plastics, and pilchards have been responsible for a lot of the captures, surface lures again first thing in the morning have also worked a treat. Upriver the jack are also out to play, a bit of fresh water in the system tends to upset the bait fish and the jacks can’t help themselves, surface and suspending lures along the edges first thing in the morning, diving lures, paddle vibes and soft plastic in the deeper water as the sun rises is the way to target the red devils. Flathead are plentiful, with the lower sections of the river producing nice fish on soft plastics, live and dead baits and even trolled lures. Bream are also growing in reported sizes as we move into the more winter style fish, in another month or so these fish will start to spawn with plenty of bigger breading fish in the system.   With all the fresh water in the system the crabs will also head down stream looking for a little more salt. This is the time to get the pots out; they are out of the holes and on the move! There is nothing more attractive to a muddy than a bit of fresh mullet, Remember your size and bag limit of 10 per person, you can only take the bucks and they must make size 15cm across the carapace.

On the beach the dart just keep on coming. Tailor are also starting to come on with Noosa’s North Shore one of the hot spots, the area north of Teewah seem to be prime area. Jewies are high on the hit list of most beach angler and the southern beaches around Coolum and Marcoola have seen a couple of captures. Fresh mullet, local squid and large clumps of beach worms have all made their mark. Fishing any of the gutters on the beach will see whiting, bream and flathead, cast to the back of the gutter and roll the bait back into the gutter under the white water, prawns, worms, small pillies and flesh baits like mullet and salted bonito should see a result.

In the fresh, Surface lures are working well with the weed banks that line Lake Macdonald producing both bass and saratoga. In Borumba; the skinny water in the upper reaches has also been good toga with plenty of fish taken on plastics, River 2 Sea Wiggle Bombs, Duo Poco Poco and Jacksons Dart Magic.