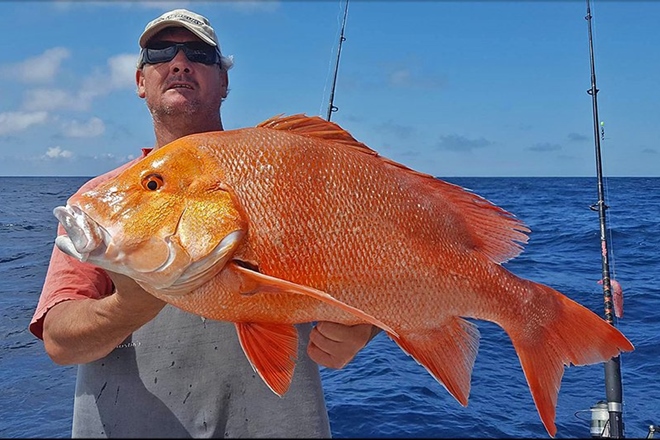 Anglers had a few offshore windows over the long weekend

The Noosa River has been really firing over the last week of school holidays, good numbers of quality whiting being taken on live worms and yabbies along Gympie Terrace and around the dog beach.  Whiting have also been taken on surface lures like the River2sea Skinny Dogs in the 65mm size. The Frying Pan and the shallows of Weyber Creek are perfect places to try this technique. Heading up the river; large flathead still dominate most reports with the mouth of the river performing well at the change of the tide. For good quality flathead try drifting lightly weighted baits like frogmouth pilchers and fresh mullet strips. Trevally are also feeding on small bait fish brought in on the tide. With the water being so clear fishing the low light periods is accentual. Mangrove jacks are really starting to come on line with plenty of fish reported from around structure and up between the lakes. Trolling the area around Johns landing with diving lures like the Lucky Craft Pointers or the Zerek Tango Shads has seen some good results.

For those heading out to the beaches, there have been some lovely whiting coming from the gutters along the Noosa North Shore, fresh baits like sandworms, yabbies and pippies have been working well. Cast your bait to the back of the gutter and slowly roll it under the white water. There have been good quality tailor with the area from Teewah up to Double Island producing some great fish. Flathead have also been in good numbers in the gutters, small fish baits like prawns, white bait and hardy heads have claimed the better fish.

On the offshore scene; The close in reefs like Sunshine have seen some quality trout, sweetlip and venus tusk fish during the offshore windows of good weather, while those that did head a little further afield were well rewarded. Double island produced snapper, hussar, venus tusk fish, pearl perch, grass sweetlip and quality red emperor. The Hards also scored some quality reefies including bigger snapper cobia and pearl perch.  Reports from North Reef has included some big sweetlip and the odd jew fish during the offshore windows. Tuna have also been on the radar for most reefs, pilchard floaters and slugs have been working well. We are starting to see a few pelagics so now is the time to stock up that tackle box, check out the new Colt Sniper range of stick bait from Shimano.   They come in three sizes and a great range of colours.

In the fresh; Some big saratoga have been landed this week using spinnerbaits and Z-man Finesse Frogs at Borumba Dam, fishing around timbered areas early morning and late afternoon have been the best times, a very slow retrieve is also important when targeting these fish. The bass are also schooling well in water depths ranging from 15-25ft, Norrie’s spoons, Hot bite Tail-Spinners and Halco Twisties have been the standout lures this week with some great size fish being boated from anglers using them. Lake McDonald has fishing well early morning with most anglers having success, casting small 2” soft plastics along the lily pad edges has been the best method catching bass.

It’s on again; the National Gone Fishing Day will be held on the 15th of October 2017. This is a day when all Australians can get out on the water for a fish and celebrate our love of fishing. It doesn’t matter if you have never fished before, Gone Fishing Day is for everyone. So why not sign up for the biggest fishing event on the Australian fishing Calendar. Jump on line and check it out and register at https://gonefishingday.org/

Previous Adapting to factors that affect your fishing offshore
Next Rain to benefit the Bundaberg fishing, crabbing and prawning