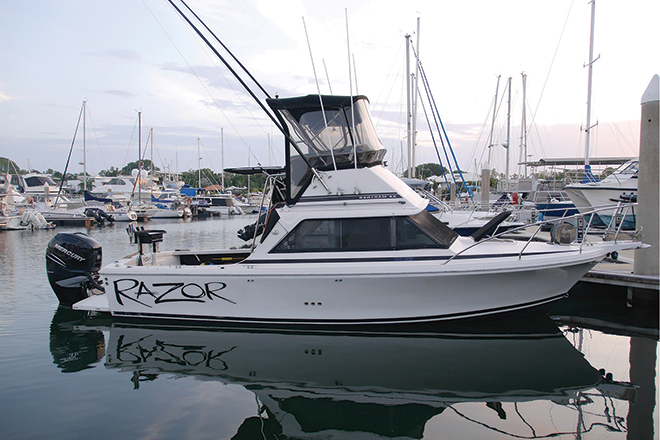 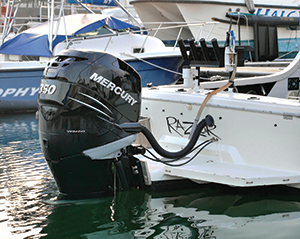 JOSH Ker, the man who heads up Bigfish Gear in Darwin, has been involved in offshore fishing for the past 25 years but he still wasn’t prepared for what happened when he recently repowered his Bertram 25 flybridge with a 350hp Mercury Verado.

“I’d been having some mechanical sagas with a 300hp engine from a different manufacturer which didn’t even have 1000 hours on it, so I decided replacing it was the only option,” he said.

“I did a fair bit of research, talking to people, going on internet forums, and in the end the Mercury simply stacked up better, especially given that it is a lot lighter than other engines.” A man with a young family, Josh was also looking for an engine that was super reliable. “As soon as the engine was fitted I took the boat out for 10 straight days to give it a good run-down ahead of a billfishing competition I’d entered,” Josh said.

“I was more than pleasantly surprised – astonished really. “She now handles like a sports boat. “It’s incredible. “At 70 km/h in a three-tonne boat I can go into a full-lock turn and this engine powers in and powers right out.” Josh said it’s unbelievably quiet as well.

“I thought my previous engine was pretty good but this is something else,” he said. “You can sit right next to it at full throttle and have a conversation. “The other day I was coming home in a big following sea and it was great, coming off the back of one wave and driving into the next the power is always there. “It puts a smile on your face.”
Especially when you’re getting better fuel economy as well.

“We came home at 4600rpm at 55 litres an hour and I was rapt,” Josh said. “I’m burning the same fuel every hour but I’m travelling further.” The 350hp Verado is the ideal outboard for deep sea/offshore fishing with its excellent reliability, instant power, surprising fuel economy and ultra-low noise. It comes standard with electro/hydraulic power steering, stainless steel propeller, fly-by-wire Digital Throttle and Shift and is the lightest 350hp four-stroke on the market.

In a little over a month Josh has already racked up 90 hours with his new Verado and that’s plenty of time to confirm he made the right decision. “I wasn’t expecting this level of performance, so that’s been a really pleasant surprise,” he said. “Even the guys at Boatland Winnellie have been fantastic to deal with. “They fitted the engine, helped me get the right prop and gave it its first service. “I’ve only got good things to say!”