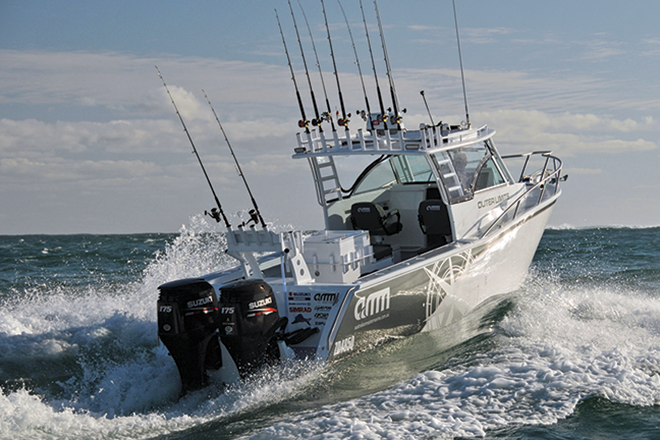 A round trip of 200 nautical miles pursuing his favourite reds (red emperor, not wines) is nothing unusual for Luke. But he now will be making the trip in an Australian Master Marine-designed and built Weekender 7800 plate alloy boat powered by twin Suzuki 175hp outboards.

Named Outer Limits and with a huge compass rose graphic splayed down its flanks, Luke likes exploring the boundaries. “You’re always pushing yourself to the Outer Limits – hence the compass,” Luke said. “It gives a sense of direction and encourages you to always push new boundaries to get to those outer reefs.”

The compass rose was a creative idea from his wife, Sammie. “She loves her fishing just as much as us boys,” Luke said. Luke’s AMM Weekender boasts a string of ‘firsts’ – the most significant of which is that it is the first time the Weekender series has been created in a 7.8m length. 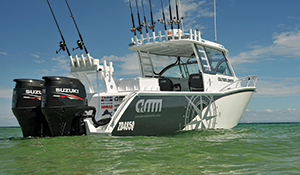 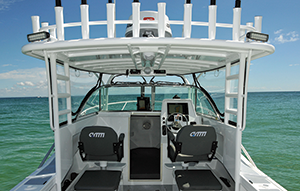 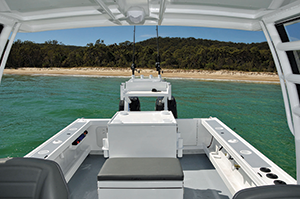 AMM has traditionally built Weekenders in 6.1m, 6.4m, 6.8m, 7m and 7.4m lengths. However, AMM does have its Tournament series in a 7.8m version, which allowed the company to carry across the naval architect-certified belowwater hull geometry.

Obviously, Luke is no novice when it comes to boating. His last boat was a Kevlacat 2400 and he previously has owned a Tabs and various Haines Hunters, among others. And as if the 40 rod holders (yes, that’s another ‘first’, 40 separate built-in rod holders) weren’t a big enough clue, Luke said in typical understatement: “We built her for fishing.”

“If there are four of us on the boat and we’ve all got a variety of rods, we have storage for them on the roof, then we have the rod holders around the bait station in the centre area for rigging up. That way you don’t have rods hanging over the side while rigging. It really gets the rods you are not using out of the way. Outer Limits is built for fishing, but there’s plenty of room to have a bit of fun as well. That’s why we included the midge screens for camping at Wathumba Creek.”

Wathumba Creek is a sheltered area on the western side of Fraser Island with no shortage of midges.
“The back station is a big icebox as well as a tackle locker,” Luke said. “We haven’t got a sink or fancy kitchen because we don’t need them. “A portable cooker is all the luxury we need.” Luke chose to supply his own selection of Simrad gear: an Evo2 12” MFD, S2009 sounder paired with a 1kW 265 LH transducer, StructureScan and 4G radar.

“I’ve always had Simrad gear and found it to be pretty good bang for the buck.” Outer Limits includes a number of special build items as well as the full catalogue of options. The AMM Weekender’s standard 240-litre underfloor fuel tank has been replaced with three 220-litre tanks with separate deck-top fillers, giving a total of 660 litres.

And there are other customised features including a solar panel and two underfloor deep-cycle storage batteries; a hard top that has been extended 400mm; seatbox Eskies extended by 500mm that drain to the outside of the hull; rear-facing Hella Sea Hawk LED light bars; forward-facing Lightforce LED light bar; LED lighting under the gunwales and underwater lighting on the transom; a cabin that is 150mm longer; two Hella oscillating cabin fans (for those summer nights); water diverters on the side decks; extended side cabin clears; 12V and USB sockets; extra side pocket storage; a Lonestar Marine GX3 anchor drum winch; Reelax helm seats; stabiliser legs for low-tide beach anchorage; and a customised alloy trailer with stone guards.

Even the cushion on the front tackle station has been customised – tapered to allow a wider opening to the storage area below it. The Weekender series’ standard equipment already included a fully welded, plate alloy self-draining floor; battery locker; bow and side rails; boarding steps, keel bar and keel cap; bowsprit; foot locker between the bunks; self-draining scuppers; a cleaning tray; polyurethane painting inside and out from the chines up; and the optional twin-outboard pod with duckboards setup.

Some of the video footage from Outer Limits’ sea trials has been posted on AMM’s website australianmastermarine.com.au