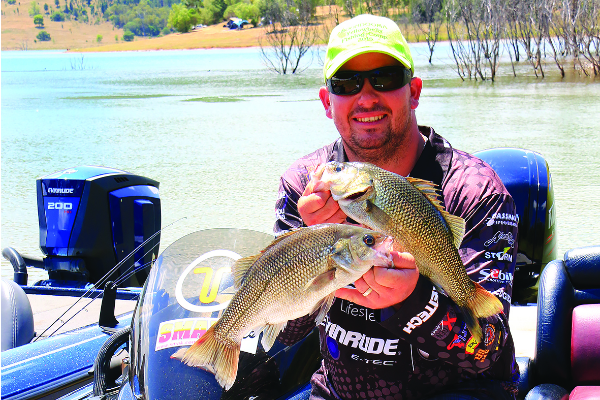 WE recently held the first-ever Haswing & Bluefin B.A.S.S. Australia Nation Teams event in NSW, the Keitech Glenbawn Teams Challenge, and what a great turnout by the anglers and also the bass, with nearly all teams weighing in.

It’s awesome to see people fishing with good friends and loved ones and having a great time on a budget in a serious event with fantastic prizes.

The three teams used different gear and tactics to land their bass but the standout lure for the tournament was the Berkley Gulp Minnow Grub, which was fished vertically to entice the bites.

The key to fishing this type of technique successfully is to have good electronics, allowing you to find solid schools of bass on the sounder before working the lures up and down until the fish start showing signs of aggression. After the bass begin to fire up, the Gulp will do the rest of the work because it looks a lot like a baitfish and the bass simply can’t resist.

Mark and Shay took home over $3000 in cash and prizes after the win. They also scored the Samurai Big Bass for the event, landing a fish weighing 1.34kg. Mark and Shay matched a Berkley Nitro Dam Deep jig head with a Camo-coloured Berkley Gulp Minnow Grub and used the new 6lb SpiderWire Stealth Braid in Blue Camo colour and Toray Super Hard 4lb leader to stay connected. Their rod of choice was a Duffrods 1-3kg stick matched with an Abu Garcia Revo Premier reel.

We headed back to Lake Glenbawn for the second round of the Atomic B.A.S.S. Australia Nation Series, the Berkley Glenbawn Challenge.

Ninety-four anglers competed in this high-stakes, premier tournament. The entrants were competing for nearly $20,000 in cash and prizes, and the best Australian bass anglers turned up.

It seems every season a new angler comes along and stamps his or her name on the world of tournament bass fishing, and it appears Terry Allwood has definitely finished his apprenticeship and is announcing that he’s ready to go to the next level.

Terry took home the $4000 winner’s cheque, instant qualification into the Megabass Championship in September and the illustrious Berkley Trophy and title in an amazingly tight finish. Terry focused his attention around Golden Point, sitting in 18-21m of water and vertically presenting a Berkley Gulp Minnow Grub in Black on an unpainted 1/6oz TT jig head. He made sure the lure went all the way to the bottom, watching the bass turn to chase it down on his Lowrance sounder screen.

Once the lure touched the bottom Terry began slowly turning his new Abu Garcia Revo MGX spin reel with his eyes glued to the Lowrance screen. The bites were subtle but Terry felt every tap through his Pflueger Patriarch XTR 7’6”, 1-3kg rod. The rod loaded up so slowly that the bass didn’t even feel the hook-up. Terry spooled his reel with 4lb FireLine Crystal main line and Sunline FC Rock 4lb 100 percent fluorocarbon leader.

Tamworth local Mitchell Cone must be thinking ‘what if’ after giving himself every chance of taking out his maiden Pro victory. Unfortunately, the second session saw him bring only the one bass to the weigh station. Mitchell has some incredible form on Lake Glenbawn and in only his second year as a Pro he has proven multiple times that he can mix it with the best anglers in the country.

His second-placed finish saw him take home nearly $2000 in cash and prizes and secured him a spot in the Megabass Australia Championship. With his current form, he will be one to watch. Mitchell fished vertically but used two different lures to secure his bass over the weekend.

Rounding out the top three was NSW angler Steven Chang, who wasn’t far behind Terry and Mitchell. Steven worked a different area to the majority of competitors, using a lipless crankbait to secure his full limit for the weekend.

He fished deep trees with his dressed lipless Jackall crankbait and it turned out to be a great plan because he caught more than 15 keepers in the last session. Steve is a tinkerer with his tackle and he created a bladed arm that he attached to the lipless crankbait to generate extra flash and sonic vibration in the water column. This particular presentation involved a gold willow/silver Colorado combination attached to a Jackall TN60 in Noike Gill colour. His rod of choice was a Daiwa 6’6” Tournament Master Z matched with a Daiwa Morethan PE SV baitcaster reel spooled with ever-reliable Platypus Platinum+ Braid and Platypus 10lb Stealth fluorocarbon leader.

Brad was one of only a few anglers who filled out a full limit for the weekend, and he took the honours ahead of Queenslanders Michael O’Dowd and James Buchner. Brad hadn’t fished Glenbawn for some time but had the opportunity to head out on the official pre-fish day with Mitchell Cone.

This turned out to be a great move because Mitchell taught Brad the technique that saw him catch the largest limit of the tournament and take home $1500 worth of cash and prizes. Brad vertically fished a Berkley Gulp Minnow Grub on a Berkley Nitro Dam Deep jig head for the entire tournament. He used a 13 Fishing Muse Gold 7’2”, light, medium-fast taper rod matched with a Daiwa Sol 2000 spin reel spooled with Amigo Plus 6lb braid and 8lb Yamatoyo leader.

The Smak Big Bass was caught by James Buchner, who is starting to build a reputation of landing the largest bass in tournaments.

This is his second Big Bass in a short period and he has been in contention for numerous other titles over the past two years. Keep an eye out for James ‘Big Bass’ Buchner in future reports.

Next month we will talk about how the series is shaping up because we are nearly halfway through this amazing series already.

With two ‘first of their kind’ tournaments this year, including the 40-knot speed limit tournament at Lake Wivenhoe and the TT Richmond River event where we will be weighing in right in the middle of Lismore, the publicity around the events will be at an all-time high for Australian tournaments.

For more information, head over to bassaustralia.com.au or find us on Facebook.