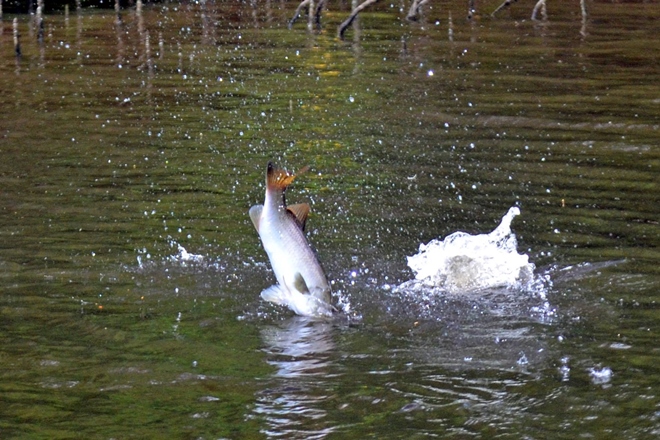 Barramundi Will be Hooked on Revitalised Fishways

SOMETHING fishy is happening at the Gooseponds in North Mackay.

Council is about to commence work on a project aimed at improving fish passage between the Gooseponds and the region’s estuaries. Cr Fran Fordham said two fishways at the Gooseponds would be the focus of remediation works.

“Council will be undertaking significant rehabilitation works to the vertical slot fishway upstream of Malcomson St and a partial rock ramp fishway near Old Evans Ave, situated at the most downstream end of the Goosepond system,” she said. “This will help popular commercial and recreational fish species such as barramundi travel through the area during important stages of their lifecycle. After adult barramundi spawn in salt water, the juvenile fish migrate into freshwater environments to grow before travelling back out to the estuary later in life as sub-adults. If we want our region’s fishing industry to continue to prosper into the future it is important we carry out projects like this so fish can transition from saltwater to freshwater habitats as easily as possible. These freshwater environments offer an abundance of food and reduction of predators.”

Cr Fordham said council was committed to maintaining the region’s fishways. “This is just one of many projects we are working on to improve the region’s aquatic network,” she said. “Council is currently carrying out a similar project at Lagoons Creek near the botanic gardens, which is also aimed at improving fish passage into freshwater environments.”

Work at the Gooseponds is expected to commence on Monday, June 6, and will run for about two weeks, weather permitting. Following these remediation works, council will be undertaking some minor revegetation work in the area, which will help to increase the bank’s stability.

It will also provide increased shade, which will lower the water temperature and help create a desirable habitat for juvenile fish. For more information about the project, visit www.mackay.qld.gov.au