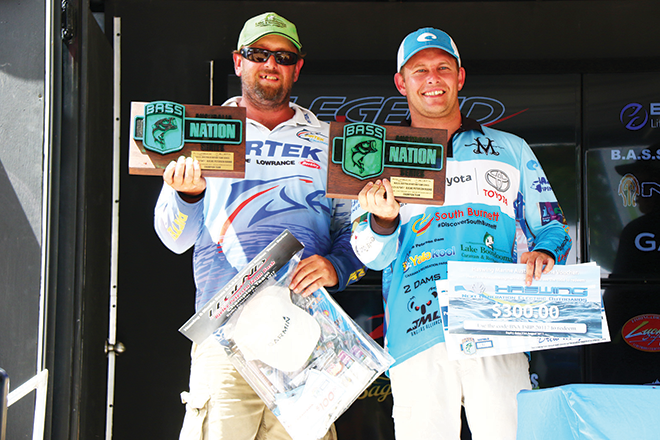 FEBRUARY is a hot time to fish the Queensland impoundments.

The air temperature is normally in the mid-30s but the fishing is even hotter, so mark it in your calendar for next year because you won’t want to miss fishing February in 2018.

Matthew Langford and Corey Goldie, both of whom live locally in the South Burnett region, dominated the Legend Boats Bjelke-Petersen Team Bash after catching a massive four out of four limit of 5.44kg in the first round of the Haswing Marine and Bluefin Boats Team Series for 2017.

The majority of the field caught their limits throughout the Bjelke-Petersen Team Bash and some teams reported captures of over 50 bass per session, so it seems Bjelke-Petersen is fishing as well as ever.

Matthew and Corey made up Team Two Dams, One Destination and they used a combination of Berkley Gulp Minnow Grubs with 1/2oz jig heads and spinnerbaits in the deeper area of the lake to catch a good number of fish and upgrade throughout the session.

Casting the lure out and letting it go all the way to the bottom before retrieving really turned the big bass on and allowed Matthew and Corey to take home a swag of gear valued at over $2000. The anglers used a combination of Samurai and Miller rods and 8lb Yamatoyo main line and leader to put the bass in the boat.

With the final qualifying round being held on Lake Boondooma (another local dam) later in the year and these two anglers sitting in the box seat, it will be tough for any chasing teams to take them out in the team of the year race. In second place was Team Bass Brothers consisting of Stuart France and Dave Young. Stuart and Dave used a combination of a Palms Slow Blatt spoon and a spinnerbait to land their limit.

Team Shads/Fishtec consisting of Greg Mitchell and Mick Johnson was not far behind after using soft plastics and lipless crankbaits to fill their limit. Greg and Mick employed a combination of Barrabass and Dobyns rods, using reels spooled with Sunline Super PE and Sunline V-Plus leader in 10lb.

With the champion team winning a trip to the US to compete in the Bassmaster Team Championship later in the year, the pressure at these events is ever increasing and the quality of the field is always high. Next month we will be down south in Victoria running the two southern events of the season.

This challenges the anglers to be more diverse and allows the Victorians an opportunity to compete on home waters and travel less. With nearly 700 members now having joined B.A.S.S. Australia Nation, we have seen amazing growth over the first three seasons and it seems things are just getting bigger and bigger.

If you are interested in competing in any of the events, head to bassaustralia.com.au or call the office on 07 5491 5807 and ask any questions you like because the friendly staff members are always more than happy to help.