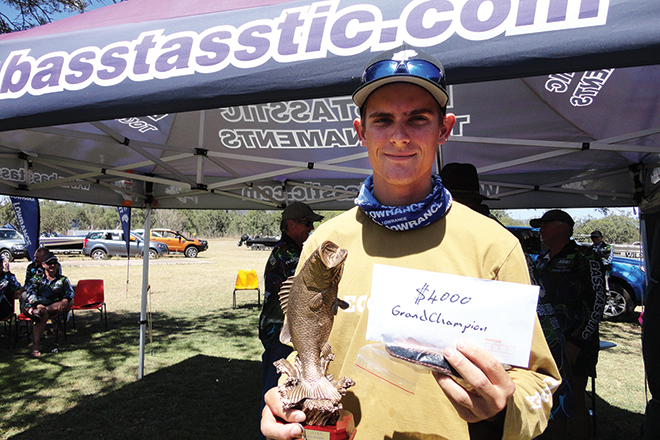 IT was great to get a thumbs up from the anglers who attended the singles Basstasstic Grand Final, with many saying it was the best final they had ever fished.

With over $21,000 in cash and prizes on offer, it was a weekend for anglers to reap the rewards of their hard work over the year. The Basstasstic Grand Final was held at Cania Dam in the North Burnett and some of the best bass anglers in the country made the top 30 ranking required to fish it.

They were joined by two wildcard draw anglers and the anglers who qualified through the Supporters Auto Entry by fishing five or more rounds in a year. All those who attended made it a weekend of great memories. With the briefing out of the way on Friday night, the Calcutta auction took place and all the anglers were sold off, with Matt Langford going for the highest price at $205.

The cash pool ended up at $2000 and it was a fun night for all involved. Saturday morning saw all anglers set off for battle, and it was a battle because Cania dished up plenty of big bass for all anglers. At the end of session one, heaps of bass were brought to the measure-in, with Mark Fox of Toowoomba taking pole spot after landing a very good bag of 898mm.

In second was Matt Langford of Kingaroy with 871mm and also close by was Jordan Renz of Bundaberg with 862mm of fish. With loads of anglers close behind these three, it was on for a great grand final. The second session saw Jordan take the lead, bringing his total to 1721mm. Next in line was Matt with 1706mm while Mick Thompson of Gladstone moved into third with a tidy score of 1668mm.

It was early to bed for most anglers after a good meal at Camp Nowland where many anglers were camped for the weekend. At the conclusion of day two and session three, it was Jordan Renz who took top spot with 2553mm of bass. Jordan won $4000 cash, a Trevor’s Leathers wallet with all the event details on it and the winner’s trophy. He put his win down to finding a productive stretch of water at the top of the dam. Here he worked drop-offs with Ecogear 3” soft plastics in Rainbow Trout colour.

Second place went to Matt Langford with a score of 2541mm.Matt won $2000 cash and a trophy.

Third was taken out by Mick Thompson, with a score of 2531mm earning him $1500 cash and a trophy.

Junior anglers also fought it out on the water in the grand final and Lane Thompson of Gladstone was the overall winner with a fantastic overall score of 2435mm. It was a great effort and Lane would have placed ninth in the seniors division with his score. Second went to Emma Wojtasik from Nambour with her score of 2284mm while Jake Johnson of Chinchilla claimed third with 2247mm.

A big thankyou to all sponsors who made the Basstasstic Grand Final happen as well as the people who helped to make this such an awesome competition.