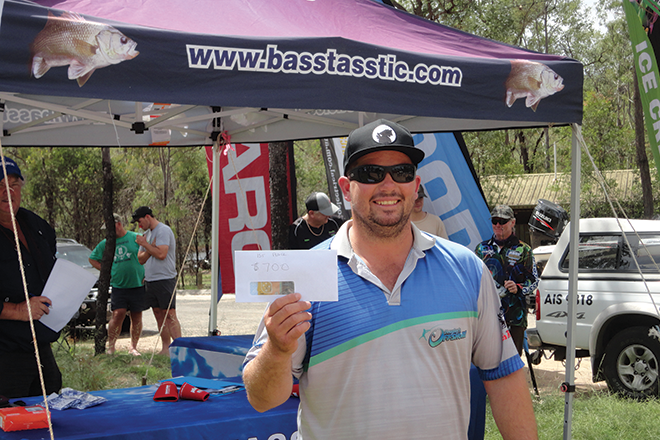 Terry Allwood was the happy winner of round one.

A GREAT weekend was had by all at Boondooma Dam as anglers travelled from all over Queensland to attend the first qualifier of the Basstasstic singles series.

Anglers were hoping to tally a strong result to help their quest of qualifying for the grand final in November. However, simply fishing five or more rounds will net anglers an automatic entry to the final. Boondooma had hosted quite a few tournaments in the weeks before this round, so everyone expected the fishing to be hard going.

In the first session, local angler Terry Allwood of Wondai hit the lead with two good bass resulting in 872 points. In second place was Basstasstic 2017 Angler of Year Jordon Renz of Bundaberg with 811 points. The afternoon session was a little tougher, with many boats moving around the dam searching for active bass.

Mick Easement of the Sunshine Coast had a good session, notching up 877 points. But it all comes down to constant solid scores, and sitting in the number one spot after day one was Terry with 1637 points. Mitchell Renz moved into second place with a day one total of 1536 points.

Day two was windy and a bit better than the afternoon session the day before. But when it came down to it, Terry ticked all the boxes and found consistent solid bags of fish to take the win with an overall score of 2466 points. He went home with $700 cash and a Trevor’s Leathers keyring featuring his score.

He also took out the Big Bass cash pool of $270 as well as the Big Bass keyring with a quality fish of 462mm. Second place went to Mitchell with 2350 points, earning him $475 cash. Peter McGarva of Gatton placed third, with 2251 points securing $350 cash.

Fourth place was taken out by Jordon, and 2209 points saw him go home with $300 cash. Rounding out the top five was Barry Reynolds of Nambour with 2180 points.Barry won $200 cash.

Layla Allwood of Wondai took out the junior section to make it a father and daughter winning event. She scored 2032 points and won the Bill and Cindy Schloss lure prize.