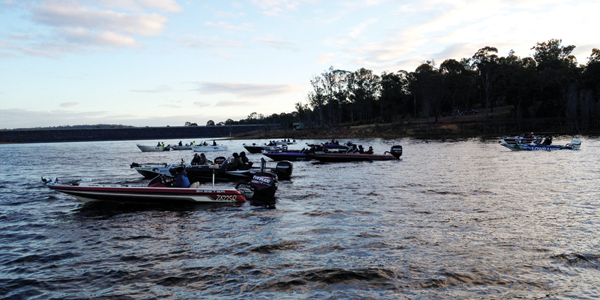 BJELKE-Petersen Dam was the venue for the action of the second qualifying round of the Basstasstic Australian Bass Fishing Teams’ Championship on July 18 and 19.

A good line-up of 40 anglers in total meant 20 teams competing in the event. Some of the best bass anglers in Australia made the trip to qualify for the Australian Bass Fishing Teams’ Grand Final, which will be held on December 5 and 6 at
Somerset Dam.

The weather was a worry for organisers, with freezing temperatures being recorded to the south and snow falling not far away on the Bunya Mountains. This big freeze made it a tough time for all anglers, and plenty of winter woollies were put to good use.

Day one was freezing and windy and it was anyone’s guess as to what the bass thought of the temperature drop.  All teams get two sessions on day one to catch their best two bass in an effort to beat their matched team. It’s a simple process and the winner goes into the cash pool and the loser into the prize pool on day two.

Session one ran between 7am and 11am and the results were quite pleasing, with plenty of bass brought to the measure-in tent. With another session to catch bigger bass, the first session is almost like a pre-fish for some teams. All anglers looked for hot soup, coffee and food of any kind to give them that much-needed boost for the final afternoon fish.

The afternoon session ran from 12.30pm to 5pm and was actually not bad despite all the weather predictions. With more solid bass captured in the afternoon session, it was looking like being a good weekend of fishing at Bjelke-Petersen Dam.

All points from day one mean nothing in both the cash and prize pools on day two and all teams start fresh with no points. However the Evakool biggest bag prize is on offer for the weekend’s best total score.

Team Rude won this prize with a total score of 1555 points and also took home the Big Bass prize of $400 cash with a 434mm to the fork bass. Matthew Langford and Jaimen Tunstall of team Roos, Rods and Reels won the cash section, scoring a cool $1000.

Ross and Jackson Tinney of team Tinneys placed first in the prize section and earned themselves two Shimano rods.The next qualifying round will be held at Borumba Dam on October 31 and November 1. All anglers wishing to compete in the final have to fish this round if they have not fished a qualifying round yet.

Congratulations to the 35 teams that have already qualified.

For more information visit http://www.basstasstic.com/ or check out the Facebook page.