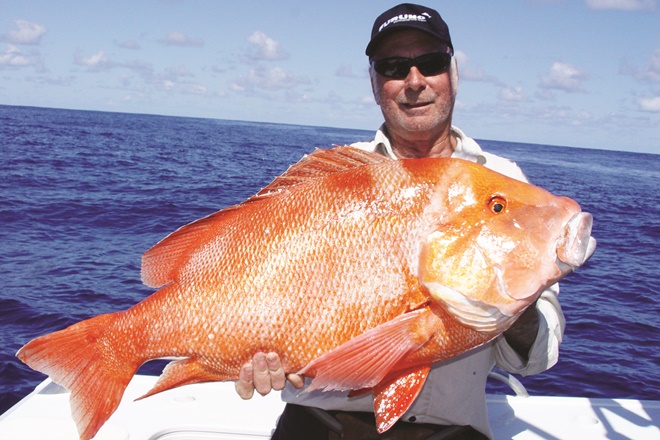 The author’s dad Terry might be 73 years old but can still pull big reds with no problems.

BETWEEN bad weather and doing a new electronics refit to my boat, it had been a while between offshore fishing trips.

With the new Furuno DFF3D, autopilot and another Furuno TZtouch2 multifunction display installed by Quality Marine Electronics I was keen to try it all out. With a reasonable weather forecast predicted, we soon found our way out the Wide Bay Bar on a glorious morning. We made our way out wide of the bar, checking various old spots but the fishing was extremely slow, with very little biting and unfortunately the current was running hard to the south. Anyone who’s experienced the strong east coast current that runs down the coastline understands how frustrating and hard it can be to fish during these times.

You generally have two options when this occurs: you either head back in close to get out of the current or you simply deal with it and back the boat up in the current by putting the engine in and out of reverse. By doing this you avoid the lines getting caught up in the drag of the current, which causes the baits to rise well up off the bottom and away from the bottom-feeding species like red emperor. Backing a boat up in the current can take a bit of getting used to and you will be continually steering and knocking the engine in and out of reverse trying to keep your lines under the boat and not out on a big angle.

After a very slow morning, I came over a small rock that didn’t have a lot of life on it but I could see good-sized individual fish sitting close to the rock, which the Furuno 295 and narrow-beam transducer does a great job of indicating. I positioned the boat well ahead of the rock and dropped a mix of mullet fillets, squid and pilchards. As we drifted off the back edge of the rock we all got smashed by decent fish and all I could think was ‘about bloody time’. Rob was first to have his fish at the boat and it was a cracking 67cm pearl perch, while Dad and I pulled up two school-sized red emperor.

We went back for another drift and I noticed on the sounder some nice individual fish were still sitting close by the rock hiding out of the strong current. As we were drifting over the rock I was constantly steering and putting the outboard in and out of reverse due to the current, which often meant I was either leaning over the seat or standing at the helm while trying to hold my rod out over the side. It’s a very hard way to fish and means you have limited control or movement while fishing, which can cost you fish at times. And that is exactly what happened.

I moved back to the helm to engage reverse and at the same time got smashed by a good fish. With no room to strike and sink the hooks, the fish pulled line with the rod tip on the gunwale, so I quickly jumped away from the helm to avoid breaking the rod tip. Within a few seconds I pulled the hooks and to say I was dirty was an understatement.

Rob on the other hand made up for it because he was also smashed and the Shimano Stella reel began to scream. It was a cracking first run and initial thoughts were it might be an amberjack but the fight soon changed into more of what we were hoping for and a beautiful ‘black lipper’ aka big red emperor soon hit the deck. Several more drifts resulted in a couple more nice reds and venus tuskfish before it went completely dead.

It’s funny how the disappointment of a slow morning’s fishing is soon forgotten about when you have half an hour of good fishing, but that’s what fishing is all about. The highs and lows keep you coming back for more time and time again. With the day getting on, I moved around to various spots but I wasn’t seeing any decent shows on the sounder and our results were reflecting this. No doubt, the bite in general was very slow, and to improve our results I needed to find new ground. The current was also getting worse and running at up to 3.5 knots, so I headed in a little and put in four hours or so searching for new ground. Unfortunately I didn’t find anything of interest, so anchored for the night ready for day two.

It was another nice day and the current had backed off a little, which was promising. I ended up in another area that holds a fair amount of reef to try our luck on various reef species, one of which was redthroat emperor. I find only some reefs off Fraser and Double Island Point hold redthroat, and I might have 20 rocks marked out in an area but only one of them will consistently hold fish. We don’t get big numbers of these fish like anglers find on the more common Great Barrier Reef systems, but what we do get is good-quality ones up to 70cm. These fish are often referred to as tricky snapper because they are good at stealing baits due to having reasonably small and hard mouths.

To help target these fish it pays to use smaller hooks and baits compared to those we use chasing red emperor. We find 5/0 hooks ganged, snooded or used singularly and baited with half pilchards or small strip baits very effective on redthroat emperor. This is exactly what we did and before long we had some quality redthroat coming over the side, with Dad pulling the biggest at a cracking 64cm. We also caught maori cod, moses perch, venus tuskfish and coronation trout, which are always welcome in the Esky and made for a fun-filled morning session.

With the sun well and truly up, the bite had shut down and we kept moving around fishing old marks and looking for new ones, which resulted in very few fish and only one 7kg red worth mentioning. We really needed to find new ground, so I kept moving around searching in likely looking areas patiently waiting for something of interest to show on the Furuno sounder. Having the ability to sound at 20 knots-plus and clearly see even the smallest of structure is a game-changer when it comes to finding new ground. You cover a lot more ground in a lot less time, which greatly increases your chances of finding quality fish. After hours and hours of searching I finally ran over a new rock with a good show of fish.

The new Furuno 3D does a great job showing the size and shape of reef structure, which speeds up the process of working out the size of the reef and where the fish are situated. Once I know where the fish are and what drift line is needed, I set the boat up well ahead of the rock and begin the drift. With how slow the bite had been, I went back to a lighter 40lb spin outfit with a sliding ball sinker to get a more natural bait presentation down to the fish. As soon as it hit bottom I got smashed and line peeled off the reel. Dad also hooked up on a solid fish while Rob got baited quickly by something smaller.

Dad was first up with a beautiful big coronation trout and I soon followed with a nice red, which was a great sight. Another drift and yet again I got smashed soon as I hit the bottom. The Venom 15-50lb spin stick was well and truly loaded up and 40lb line was screaming from the reel. I love nothing more than pulling good fish from newly found spots and I was having a great time hooking them on the lighter spin gear. After several good runs I had another red on the deck and this one had inhaled the pilchard and ganged hooks into its stomach.

With the fishing slowing and happy with our efforts, we decided to head back in closer off Double Island Point for the night to get out of the current and fish the close grounds the next morning. I hadn’t travelled long before I ran over another new spot in the middle of nowhere and had a drop on it. Dad got smashed well off the back of the reef and lined peeled off the reel several times. We all waited in anticipation and that awesome red glow down deep began to show as another big red made it into the net. After telling him he needed to do that again, I went back for another drift and what do you know he hooked up to another quality fish. This fish wasn’t as big as the last but another good red of around 9kg came over the side. Unfortunately the sharks turned up on the next drift, so we called it a day and headed in closer for the night.

The next morning we fished in close off Double Island Point and managed some pearl perch and mixed reefies before heading in mid-morning. It was great to get out and use the new Furuno electronics and I will cover more on the electronics in another article soon.

We covered a total of 480km, which was a pretty big effort, but sometimes you just need to adapt to the conditions, change plans and have that never give up attitude to get the results.