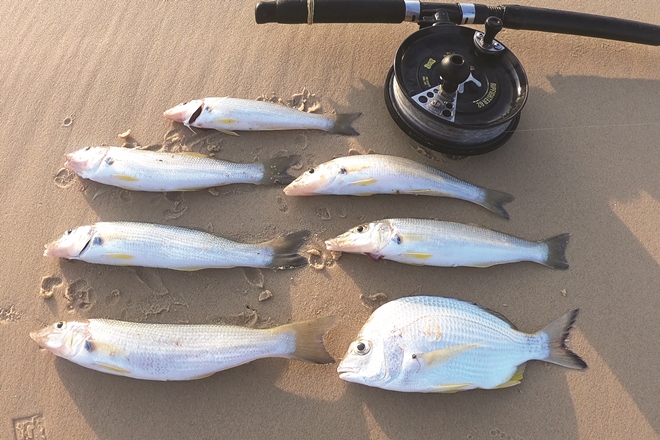 A recent catch by the author from a low tide beach gutter.

DESPITE the generic name of summer whiting, I find March, April and May can be some of the best months to chase summer whiting on the beach, particularly on the Sunshine Coast and further north.

While catching whiting from the beach can be relatively simple at times, anglers using the right bait, tackle and techniques will be the ones who get consistent results while others miss out. Often people (of varying fishing expertise) don’t realise what they might be doing wrong. I see or hear this from people when I am trying to diagnose why they didn’t catch fish on the beach they were fishing.

Let’s look at a few of the things you want to avoid in terms of location and tackle, then outline what you need to be doing to get it right. I’ll also touch on some of the other tricks and tips I’ve learnt to increase your chances of success even further.

Location – what not to do

The fact some casual anglers consider beach fishing unproductive probably comes down to where and how they fish. All too often I see inexperienced anglers or families fishing the beach directly in front of the track that leads down there. This is usually in barren, featureless water or an area full of swimmers and surfers.

It is not only casual anglers who can fish the wrong water for whiting. I also see plenty of more experienced anglers, such as seasoned tailor anglers at Fraser Island, fishing for whiting in the wrong type of gutters or more simply, the wrong area of the gutter.

If you want a break between fishing for tailor, avoid those same deep inshore gutters that might hold tailor at dawn and dusk but are generally too deep for whiting and therefore tend to harbour more dart. Big dart like the deeper water and small dart in closer to shore in shallower water. Another mistake I see with some anglers chasing whiting is the type of area they are fishing, even when they have chosen the right type of water.

This might entail wading out into the shallow gutter and casting to the back of the gutter when the fish were probably right at their feet. Always cast while standing well back from the water’s edge when fishing for whiting until you have worked that close shore break.

Location – what to do

No matter what fish you are chasing, you need to think like a fish to understand where it may be at certain stages of the tide and why. Beach whiting will primarily choose their location based on perceived safety from predators and food.

You should be looking for whiting on the edges of sandbanks in shallower gutters and right up hard against the shore, particularly when there is a shore break. The ideal conditions are light to medium surf so there is some cover from waves breaking on the bank and covering the shallower gutter, but not so much swell that it churns up too much sand and the waves knock the fish around and temporarily disorientate them.

The locations I choose are tide dependent. At high tide, I look for nice clean water with a bit of white wash. Good high tide locations can be sand spits, shore breaks and those that at low tide have a very shallow and clear inner gutter, along with an exposed back sandbank. Sand spit gutters are typically covered by about 0.5m to 1m of water on high tide and drop away into a slightly deeper gutter.

Another favourite high tide location is a shallow gutter pressing hard up to the shore with a small shore break. The waves generally curl up less than 0.5m and break right on the beach, thus exposing beach worms and pipis to the hungry whiting.

A third type of high tide gutter I like has a shallow inner gutter with a nice foam covering from incoming waves and the back sandbank covered by about a metre of water. Low tide shallow gutters are some of the least fished on the beach, but can turn on some of the best whiting action of the lot.

Features of a great low tide gutter include:

The peak period for fishing these types of formations is one hour before to one hour after low tide.

Beach corners are another brilliant location for whiting. Beach corners are areas where the sand meets either rocky headlands or large rocky outcrops that protrude into the water. The only other ingredient you need is slightly deeper water where the beach meets the rocks. Generally a permanent gutter is carved out at such spots.

On days when the seas are flat and the skies are clear and blue, beach corners can be the most productive spot on the beach for whiting because they offer some form of structure and therefore protection.

Tackle – what not to do

While beach whiting fishing doesn’t require expensive gear, using the wrong tackle will lead to less fish or worse, tackle failure. The beach is a harsh environment with salt water and sand and is no place for expensive spin or baitcaster gear. Having salt water splash on the reel, or accidentally dropping the reel in the sand when taking off a fish or re-rigging, can lead to tackle failure shortly after.

Likewise, buying the kids cheap K-Mart specials can soon lead to frustration or tears when the gears on the reels jam.  When it comes to rods, avoid those marketed as ‘general purpose’ in the 8’-9’ range. I call these rods ‘no purpose’ because they are either too stiff in the tip for whiting fishing from the beach or too light and short for casting bigger baits like pilchards for tailor.

Buy the right gear for the species you are targeting. Line and leader choice are other areas where anglers’ results can take a hit when chasing whiting. While braid has its place in beach fishing, particularly when throwing lures, for whiting, you want some stretch in your line for the fish to pick up your bait and run before it realises there is a hook, line and rod attached to the other end.

Braided line doesn’t stretch, so you are better with monofilament. Like many fishing tactics, lighter is better when it comes to the main line on your reel for whiting. Heavy, thicker lines of 15lb-plus are easier for the fish to see and detect in the shallows.

Likewise, heavy lines will have more drag in the water and so will be much more easily pushed into shore or sideways in any sweep. The length of your leader can also play a part in your catch rates. I’ve seen people with a running sinker down to their hook or short traces of 30-40cm when chasing whiting off the beach.

The problem with this is the fish will pick up the bait and instantly feel the unnatural weight of a sinker pulling against it, causing it to drop the bait. Finally, at the business end of the line, hook size and type is critical. I see some anglers using suicide hooks or big 2/0 long-shank hooks for whiting.

Whiting have small mouths, so you want the hook to be small enough for the fish to comfortably mouth and even swallow.

Tackle – what to do

If you want your reel to last a lifetime and not have to worry about dropping it in the sand or salt water, buy an Alvey sidecast reel. A 5”-5.5” Alvey matched with a 10’6”, 2-4kg whippy beach rod is the perfect combination. A whippy tip will flex and allow you to ‘flick’ out soft baits such as yabbies and pipis, whereas stiff rod tips will see them fly off into the deep blue yonder.

Also choose a ‘low mount’ rod if you run an Alvey because this ensures the longest casts and most comfortable winding position. If you must use a spinning reel on the beach, be sure to carry a rod holder while you re-rig or catch a fish. However, recognise this means you will be less mobile than the angler with an Alvey who can just drop it on the sand as he/she moves from gutter to gutter.

When it comes to lines, about 6lb is perfect for the beach, though some people prefer to go slightly heavier. I also use 6lb fluorocarbon trace because this line’s reflective qualities are nearly identical to water, making it much harder to see under water. In terms of trace length, for an Alvey I run a ball or bean sinker between two small size 12 swivels about 25cm apart and then a leader of about 80cm.

Be aware that not all lines are the same. I choose lines with the thinnest possible diameter for their strength when fishing for whiting, such as Platypus Super-100. At the business end, I run some red tubing and three to four red beads above the hook to attract fish to the bait.

This really works and I have seen such setups outfish baits without it many times on the beach. In terms of hook size, a size 4 long-shank is a good size for the beach. For many years I have used Tru-Turn hooks because of their unique bent cam action, making the hook strike upwards into the mouth of a fish for a strong hold even with a gentle bite.

Unfortunately I’ve run out of space, so next month stay tuned for part two on beach whiting techniques, baits and tackle preparation.

In the meantime, I’d love to hear any feedback on my articles and posts via my Ontour Fishing Australia Facebook and Instagram pages.

Sean caught the fishing bug bad one very cold Canberra day 20 years ago when he was bored and picked up and read Angler's Almanac by the fireplace. Since then he has filled his mind with knowledge from fishing magazines, books, the internet, TAFE fishing courses, guiding fishing charters (estuaries, beach, bay and mountain lakes) and of course 'on water' experience. He and a group of mates formed a social fishing club and soon started to share what they learnt and caught online. Sean is the admin for Ontour Fishing Australia on Facebook, which is a page that shares information, reports and sponsor giveaways and welcomes all to the site. He plans to move into blogging on his new website when time allows.
Previous The versatility of tried and tested fishing techniques
Next Noosa waterways quieter but big fish not going anywhere