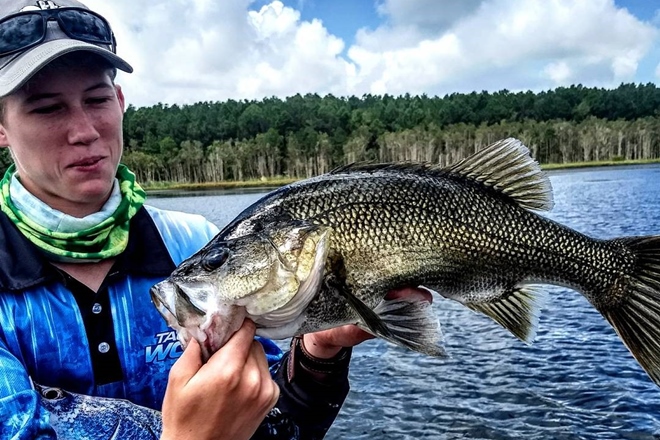 Corey Hanks with the 51cm Australian bass he caught at Lake Gregory recently.

Big bass on the bite around Bundaberg

Well around the Bundaberg area we sure have copped our fair share of rain over the past week, sending more fresh down most of our river systems.  This will make the fishing very interesting, as this will push most of the species back down towards the river mouths.

There has been a good number of bream about with some topping 40cm.  These big bream don’t mind a bit of fresh and appear to be there in good numbers.  Fresh baits such as mullet fillets and large peeled prawns have been the go to baits.

There are still a few flathead and grunter about with a few small jew mixed in with them, but please be aware of current Queensland Fisheries rules and regulations regarding the size and bag limits on all jew species.

The recent rains would have flushed the mud crabs out, so if you’re keen to chase a feed of muddies, I’d concentrate your efforts down around the river mouths.

With all this fresh in our systems, it will also be worth trying some dam fishing, with both Lake Gregory and Lake Monduran fishing well.

Firstly, Lake Gregory produced a fantastic bass bite this week with some big bass to 54cm being caught.  Most of the big bass have come off the weed edges and have been targeted by using Spinnerbaits and small suspending hard body lures, fished with long pauses.

There is a lot of smaller bass schooled up in the middle of the lake and catches of 20 to 30 bass in a fishing session are not uncommon.  Small blades and soft plastics have been going well on these schooled bass.

Lake Monduran is still fishing well, even though it recently over-flowed.  Barra to 106cm have been caught, although most of the barra are in the 60cm to 70cm range.  At this size they are the best fighting barra to catch.  Most of the barra that have been caught have come from up above White Rock and up into both the south and north arm of Section B.

Small soft plastics in the four inch size and small diving hard bodies have been the lures of choice, and the Zman Swimmerz in 4” and the smaller Luckycraft Pointers and Rapala Xraps have been the stand-out lures for the Monduran barra.