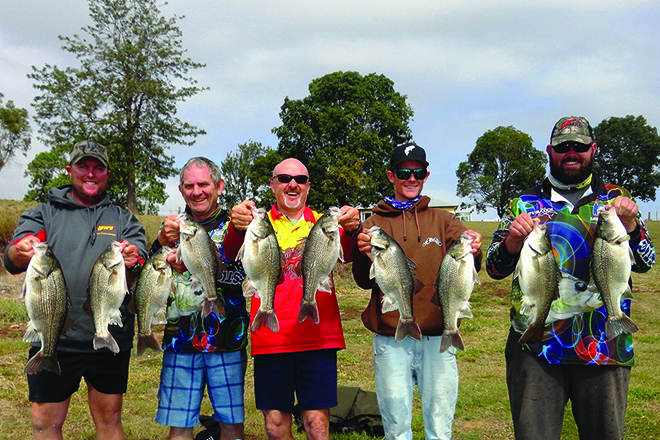 SOMERSET Dam produced big bass for anglers at the fourth Basstasstic qualifying round on August 5 and 6.

For months Somerset was plagued by reports of plenty of fish spotted on sounders but none getting caught. Leading in, the weather was forecast to include a funny type of cool change, with storms on the menu.

The first session on day one saw huge bass brought to the measuring station. I have never seen so many big bass at a tournament. Lachlan Achilles of Hervey Bay measured in two whoppers, one going 479mm to the fork and the other 475mm.

His first session score of 954 had him sitting in first place. Michael Thompson of Gladstone was hot on his heels with two good bass earning him 928 points. Steve Otto of the Sunshine Coast also had a big bag totalling 913 points.

Many other anglers landed good size fish over 40cm and the comp was anyone’s at this stage.
Session two saw stable conditions continue and the big fish come out to play. Lachlan was on a roll and measured two more giants at 485mm and 482mm.

Steve picked up two horses for 953 points, while Jordon Renz of Bundaberg tallied 944 points. At the end of day one, Lachlan was sitting in first with 1921 points, Michael was coming second with 1847 points and Jordon slipped into third place with 1828 points.

The talk on Saturday night was all about what the fish were biting. Spoons seemed to be the go-to lures. The successful anglers worked them very slowly in the deep submerged creek bed.
Winter really set in overnight and when the anglers hit the water on Sunday morning it somehow got even colder, with freezing wind.

But it didn’t seem to turn off the fish at all. The big bags kept coming in, with 87 fish over 40cm to the fork and 47 of these over 45cm. These were record figures for a tournament held on Somerset.

It was so good to see all these big fish caught and released. The anglers were in awe and it was something they may never see again. Lachlan continued his form from day one, measuring in two very good fish to push his total to 2854 points, which was a massive score to ensure a big win for him.

He won $700 cash and loved his keyring with the big score engraved on it. He said he wants to keep the keyring for years to come as proof he managed such an epic score. Michael held on to second place with a great score of 2812 points, taking home $500 cash for his efforts.

He also won the Evakool Big Bass prize of an Evakool icebox and the Big Bass cash pool of $390 thanks to a simply huge 512mm to the fork Somerset bass. Third went to Jordon with his score of 2750 points seeing him walk away with $300 cash.

The Shimano No Fish prize of a spin reel was won by Gavin Sticklen of Gatton. The Austackle Rookie lure prize was won by Dave Howard of Kingaroy with a score of 1732 points and the second-placed Rookie prize of a Sludgies Lures voucher went to Brett Klaus of Mount Mee with his score of 1703 points.

Our female angler prize comprising Bigfish Gear lip grips and scales was taken home by Liz Thompson for her score of 1340 points at Somerset. In the juniors section, it was all Lane Thompson of Gladstone.

After two days on the water, Lane finished with 2228 points, which was an exceptional effort. He was actually seventh overall, which was a job well done for an up-and-coming angler.

Lane won the lure pack donated by Bill and Cindy Schloss of Dalby. The second-placed junior was newcomer Matt Taylor of Wallumbilla with a score of 1862 points, taking home a Shimano Sedona 1000 reel.

Ethan Thompson of Gladstone came third with 1202 points, winning a Sludgies Lures voucher.
The next round is to be held at Borumba Dam on September 23 and 24. A big thanks to all the sponsors.