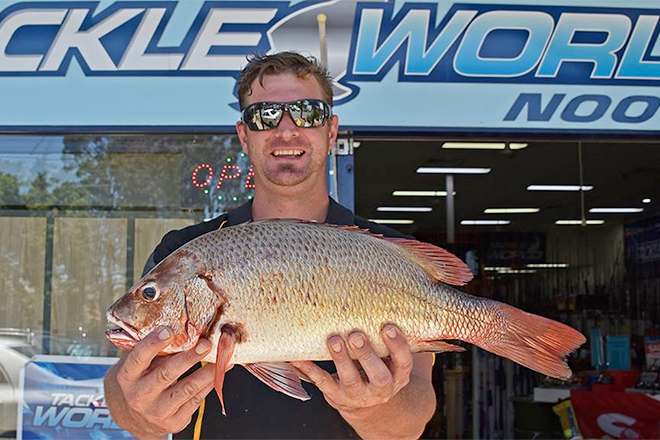 Big Jacks in the Noosa River

With a couple of great weather windows last week angler headed out to do battle with some monster mackerel, this is that great time of the year when we start to see the bigger mackerel turn up, trolled lures like the Halco Laser Pro’s, Samaki Pacemakers around has reef has raised some quality fish.

Tuna schools have been just over the bar in Laguna bay. Some great catches and numbers have been produced using Halco Twisty lures. For those heading to Sunshine Reef; floated pillies in a burley trail has worked well for mackerel and cobia. Fishing hard to the bottom has pinned some nice coral trout, using live baits have been the go as well as micro jigs like the Zetz Slow Blatts. North Reef has produced some quality jew, sweetlip, mori cod, and gold spot cod. Dolphin fish (mahi mahi) have been in good numbers and responding well to the Rapala XRap Mag 20.
For those that headed further afield, the Hards has seen large Tuna schools, good sized squire, moses perch, mahi mahi and tusk fish.

In the Noosa River, starting down towards the mouth; the whiting have been in good numbers with the Frying Pan one of the prime spots, as always, worms and yabbies have been the go too baits, surface lures have also worked well across the shallows, Lures like Strada Viral in70mm size and the Bassday Sugar Pens 70f worked slowly across the surface with a walk the dog retrieve have claimed some good fish.

Mangrove jacks have again been a prime target for anglers, free floating fresh mullet strips and live baits fished around the many pontoons of the Noosa Sound has resulted in some quality jacks. Soft plastics worked slowly in the deeper holes has also produced some great catches. Another fish we are seeing good numbers of is flathead, fishing live baits, dead baits soft plastics, and even micro jigs have claimed some great fish, the river mouth and around Woods Bay and all the way up to the lakes has seen quality fish boated.

A great way to tangle with some great fish is to have a troll, you cover a lot of ground and claim a variety of fish, be it jacks, flatties, bream, and threadfin salmon. Trolling creeks around structure and the rock bars is ideal, a couple of my personal favourite lures have to be the Bagley rumble B, Jackall squirrel 79sp.

On the beaches, the Noosa North Shore has been fishing well for chopper tailor, fishing baits like mullet strips, bonito and pilchards has seen results and as we move into an early morning tide we should see more fish on the bite, if you do come across a school of feeding fish be sure to get the spinning outfit going, cast slugs like the Halco Twisty or weighted soft plastics with a steady retrieve.

In the Freshwater; Quality bass have been caught at Lake McDonald using spoons, Hotbite tailspinners, and spinnerbaits in the early morning sessions. LED Balister hard bodies have also worked well for bigger sized fish in the late afternoon moving into the evening. A few big toga have been caught around the timber areas using Megabass Dog X surface lures, as well as black and gold spinnerbaits.

Up in Borumba Dam there has been good bass and toga this week. Using 3 inch paddle tailed soft plastics along with spinnerbaits in the timber areas. Casting to the steep banks has worked well with the bass schooling in 30-40ft of water along the rocky edges.