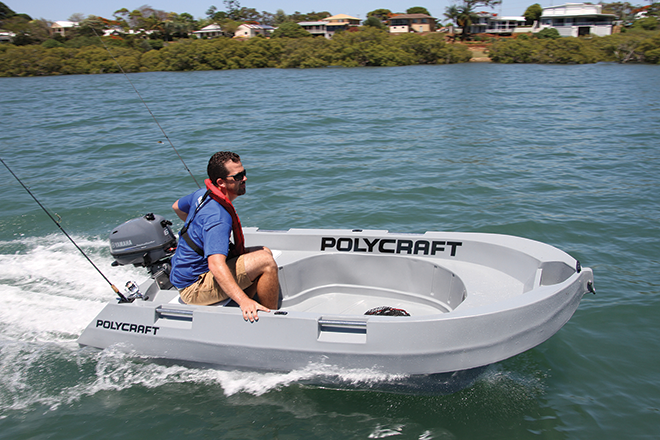 Polycraft has recently modified its 3m Tuff Tender and made a lightweight version that comes in at only 68kg and is rated to 6hp.

And with more and more people hooking up the camper trailer or caravan and heading to remote locations, the need for functional car topper boats has increased.

Irrespective of whether you are throwing the car topper on the roof of your car or custom racks on your camper trailer, one of the most important factors to consider is the weight of the boat. It is also imperative to find out what your car and camper can legally carry, so you know what boats will suit you.

As the name suggests, Polycraft builds plastic roto-moulded boats, which makes them ultra-tough.
I can attest to this first-hand because I’ve had a 4.5m Polycraft for about 10 years and it has copped a fair beating.

You don’t need to be as precious with a Poly as you might with some other boats. This is especially handy considering you may have to drag a car topper across the ground, roll it over and perform various other manoeuvres to get it into position and onto the roof or camper racks.

Additionally, if you do happen to drop your Poly, little or no damage will be done. In anticipating the struggles of lifting a boat onto a roof, Polycraft has incorporated a couple of recessed grab rails on each side of the boat. Previously, the Tuff Tender was rated to 15hp but weighed a fair bit more.

Another thing to consider when picking a car topper is an engine that is well matched to the boat. You need to be able to lift and carry the engine and store it somewhere where it won’t move while travelling. To find out how this new boat went, I caught up with Will Lee from Yamaha and we took the Tuff Tender and new lightweight portable 6hp four-stroke Yamaha for a run out of Wellington Point.

This new Yamaha was designed to be lightweight, compact and economical, which are all the features you need in a portable engine. Comprising a single cylinder, the 6hp is ultra-easy to use and features a specially developed four-stroke overhead-valve design delivering excellent combustion efficiency as well as economical and smooth running.

A handy feature of the new 6hp Yamaha is the location of the fuel filler for the inbuilt tank, which is now positioned at the front of the engine and on an angle for easier filling. You have the option of running a tote tank, but the engine is so economical you may not need one.

This is a good thing because you won’t have an extra tank taking up space in the boat if it is not needed. As part of the easy-start operation, a built-in primer is located under the cowl, which just needs to be pumped a few times before starting the engine.

Yamaha has also ensured the engine is truly portable, weighing only 27kg. The engine features Yamaha’s oil leak prevention system, which is an ingenious innovation allowing you to lay the engine on its front or side without compromising the oil seals for hassle-free transport and storage.

This feature opens up the way the engine can be transported, making it even easier to pack and stow for long journeys. Yamaha has also achieved a perfect parallel balance position from the carry handle, making the engine easier to carry.

The parallel carry position means the portable engine can be carried with your arm fully extended without the skeg touching the ground. In terms of performance, the 6hp engine features a three-step shallow-water drive system that will come into its own when tackling Australia’s shallow rivers, estuaries and creeks.

A five-step trim adjustment can be modified depending on water conditions and boat load for optimum engine performance. So how did all this translate to on-water performance in the 3m Tuff Tender? Well, it was a nippy little rig.

Initially, both Will and I got in the Poly and had a bit of a play, performing a few different manoeuvres that the boat and motor handled with ease. The tri-hull design of the Polycraft meant it cornered very sharply and was also relatively stable.

It was even possible to stand up and flick lures at the mangroves. As with any small boat, you need to be a little conscious of weight distribution. I’m no featherweight but the boat felt very safe with the two of us on board and planed easily.

Obviously, the boat performed a bit better with just one person aboard, which was evident when I filmed Will taking it for a spin (take a look on the BNBFTV YouTube channel). In fact, it was quite spritely, with the Yamaha 6hp four-stroke revving out to an estimated top speed of 27km/h.

The Polycraft ate up the slightly choppy conditions as it skimmed across the waves. If you are in the market for a car topper or tender, it would be well worth considering the 3m Polycraft Tuff Tender matched with the economical 6hp Yamaha four-stroke.