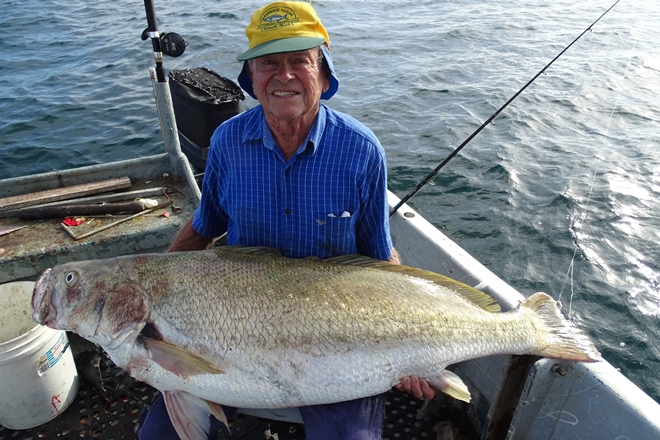 If only the author had Lewan in the photo. It would have been Hughie, jewie and Lewy. Alas, a missed opportunity.

I’M sure you’ve already looked at the photos, so you know Hugh’s back in the caravan park here at Brunswick Heads keeping the dingoes away.

Hugh is adamant that a couple of rums a day keeps the dingoes away from the park and I’ve gotta be honest, I haven’t seen any around. We haven’t had a lot of time offshore but the few trips we’ve undertaken have been eventful. On one trip, Hugh pulled in a steady stream of reef fish while Lewan and I attempted to skull drag spotted mackerel away from the monster bull shark that had taken up residence under our boat. Hugh said you can’t buy this sort of entertainment as we yelled at the shark and watched our mackerel disappear in massive surface explosions. On one occasion the bull shark got completely airborne and it was an impressive sight indeed watching a 300kg monster trying to fly.

I agree with what Tri said in his article last month, and that is to not continually waste perfectly good fish to sharks, so we pulled the pin and headed home. A comical aside to that story is as we were leaving, a boat next to us hooked the shark after it ate his mackerel. He fought the shark for a fair while before a spearfisher came over in a boat and asked the hooked-up fisho if he wanted him to go down and shoot it. The guy fighting the shark was a bit surprised and said: “Oh, OK, I guess so!”

He assumed the spearfisher knew it was a big shark, and this is where things got a bit funny because the spearfisher thought he was fighting a marlin, but they never communicated this to each other.

Anyway, you can imagine the result. Amid a barrage of profanities with the word shark thrown in a few times, the spearfisher came out of the water like a missile fired from a submarine. My only regret is I left too early to see that part.

On a subsequent trip, Hugh was sitting in the ‘game chair’ waiting for a red ned to bite when the rod beside him that I had set with a live bait went off. Taking the rod out of the holder, this fish just kept stripping line off the reel and was more than halfway across the reef before it stopped. I said to Hugh I doubted it was a jew because it had taken too much line. My suspicions were seemingly confirmed when the fish then circled completely around the anchored boat before sitting deep under it. “Might be a cobia,” I muttered before I saw a big flash of silver down deep. Hugh let out a groan when I told him it was a big GT.

It made sense – a long run across the reef before circling the boat and then hanging tough down deep on its side. Add this to the fact I had caught a 27kg GT just two days prior in the same spot and it all added up, until that is, the fish took on a deep bronze colour. “I think it’s a big jewfish,” I said. This got Hugh a bit more interested and sure enough a whopping jew was gaffed aboard. I took a punt at 25kg and secretly hoped for a bit more.

After this I pulled in another jew on a floating bait and it put up a pretty good fight but looked like a pup next to Hugh’s fish in the icebox. I tried to take a good photo of Hugh with his big jewfish but it was pretty difficult to hold up so it’s not the best pic. Back at the scales it went 28.1kg, so no wonder it was hard to hold up for a photo! Mine weighed a respectable 18kg but wasn’t in the same league as its mate.

Trips since then have yielded more big jewfish. These are fish of a size not usually associated with reef fishing. I don’t know why they are there but I’m not complaining. We are just coming into prime jewfish season now, so let’s hope it’s a cracker.

Spotted mackerel are few and far between but the odd spanish is around. It’s not going to go down as one of the best seasons but it certainly hasn’t been the worst so far. Sharks are the main problem. On the morning of writing this article, I headed out to the local reef in the pouring rain and had a beautiful mackerel bitten by a shark. The two-thirds we had left went 10kg, so at least the shark left us a feed. A day before that, I was fighting a small shark when it was bitten in half by a bigger shark. That’s how bad things are getting. The sharks are eating sharks!

Bull sharks are becoming a real problem everywhere and their numbers are blowing out. I know a bloke who manages a big station on the Mary River in the Northern Territory and he said bull sharks are ruining the fishing in the Mary. So if you are into a bit of flake and catch a small bull shark, don’t feel bad about taking it home for a feed.

I am pleased to report that on the very rare occasion the weather has been good enough to get out to Windarra Banks, I’ve seen small yellowfin tuna getting around. Regular readers will also know I have been bemoaning the lack of cobia for the past few years. Well, a few are around, though not thick mind you, but some are better than none. While mackerel fishing lately, a fair few longtail tuna have been caught. They are pretty good size specimens of about 20kg, with the odd even bigger one thrown in. Among them is the odd yellowfin tuna of similar proportions.

Mangrove jack are in the Brunswick River at the moment and will start to move downstream to the walls later this month. Mud crabs are being potted regularly too, so it’s definitely worth a trip up the river. Autumn is usually the best time of year around here, so make the most of it!