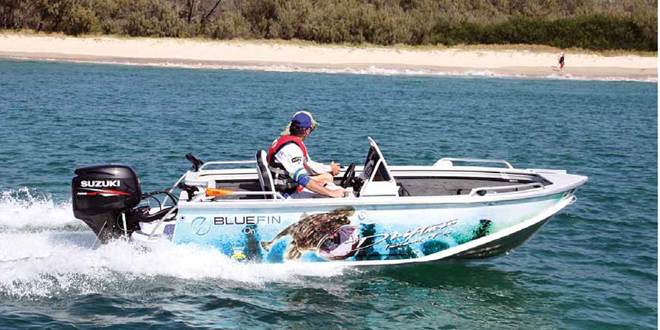 The 60hp 4-stroke Suzuki was a good match to the hull.

WITH new owners taking the reins of Blue Fin Boats within the last year, there has been a continual and concerted push to a more versatile sports fishing style of boats.
One such example is the new Drifter Tournament Pro.
Designed and built in Australia for the serious angler, this boat combines functionality and style that fully maximises the amount of space available.
Currently the two models available in the Drifter Tournament Pro range are the 4.35m (which is the one I tested) and the 4.55m.
Both are a side console format, which I believe gives the maximum amount of useable fishing area.
Side consoles also allow for easier movement around the boat, which is a key consideration for smaller boats.

A feature of the Drifter Tournament Pros, and something that makes them a little different to boats of similar size is the full pod transom.
Theoretically this should make it a smaller boat, and in relation to internal length it does to a certain degree, but there are positives associated with this and the reason why the manufacturers have gone down this path.
While not a new concept, the pod does allow for higher horsepower ratings.

The 4.35m has a maximum recommended rating of 75hp, making this a bit of a rocket ship.
It also allows for a number of different brands to be fitted and I’m sure all would perform well given the design of the hull.
Fitted to the test boat was a 60hp Suzuki 4-stroke, an exceptionally quiet engine with plenty of poke.
On speed trials with two people on board, not much fuel and some safety gear, we actually hit a top speed of around 62km/h (albeit with the tide).
This is pretty quick for a boat of this size.

The pod also eliminates any water that may splash over the more traditional back well as well as providing a good spot to step on when boarding.
It also increases the strength of the transom and allows for the higher horsepower mentioned and extra beam.
Both models have a beam of 2.04m which is very respectable for boats of this size.
And this is where the compensation is for the internal space that may have been lost by the pod.
The addition of a massive front casting deck, fully fitted with anchor storage, twin large hatches (one fully optioned with tackle trays) and a massive 90-litre live-well provides ample places to stand and flick a lure.

On the starboard side is a rod locker with a lockable section underneath that will easily fit extra tackle trays.
At the rear, an additional casting platform ensures two anglers can easily fish without getting in each other’s way.
Underneath the casting platform is even more storage which is accessed by the hatches.
The port side houses the battery, fuel filter and battery isolator switch which can be easily reached.
As a standard feature all the casting and floor areas have been covered with platinum hookless carpet that is not only functional and presents well but also matches the overall quality finish of the boat.

In keeping with the neat, clean look of the Drifter, the driving position, while reasonable compact, provides enough room for the comfort of the driver.
This is aided by the fully equipped suspended console which allows taller anglers to extend their legs underneath.
Four different seating positions offer a bit of flexibility in that area.
Underfloor is a 60-litre fuel tank that will give a massive range regardless of engine choice.
You can finish the Drifter with an unlimited colour choice of two-tone paint or opt for a custom vinyl wrap, which really makes it stand out.

Tested on the clear blue waters of the Broadwater, conditions were predominantly very good with the odd larger vessel’s wash to run over and a bit of chop where the tide was running against the wind.
Like any open boat, if the wind and waves are going in the wrong direction you will get the odd bit of spray, however the Eziride hull is designed to give a true and stable ride.
The hull now includes a slight reverse chine that is easily noticeable on the trailer.
This design feature gives you extra stability at rest, which is important in a smaller boat, along with extra control and direction when at speed.

Overall Blue Fin has put together a very neat, functional boat setup for the dedicated fisho.
Combine that with good performance, quality build and you have a boating package that will make most anglers very happy.
For more information on the new Drifter Tournament Pro model or to find a dealer near you, visit www.bluefinboats.com.au