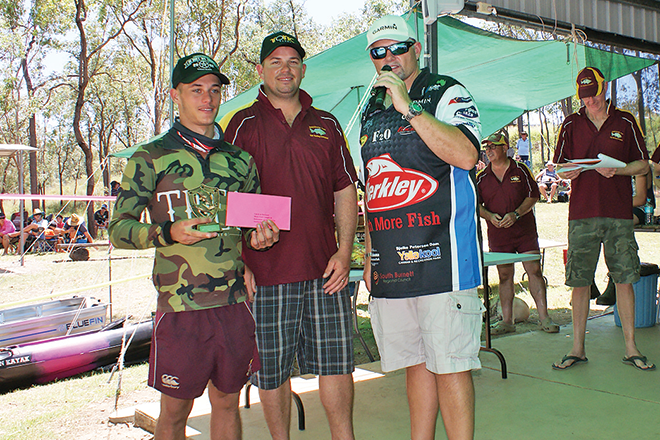 The prize for most fish caught and released was won by Dylan Brandley.

BOONDOOMA Dam Yellowbelly Fishing Competition spokesman Terry Allwood said the lake fished extremely well for the 2016 event, with over 200 fish landed in the catch and release section and another 316 in the gilled and gutted section. The biggest yellowbelly of the event weighed in at 2.25kg and was captured by a junior.

The competition set new records for attendance, with 835 entrants including 202 juniors. The ongoing support of many generous sponsors ensured a wide range of prizes were available for all competitors, and over $25,000 in cash and prizes was given away over the weekend. Cash and prizes were presented at the end of each of the three sessions and overall competition winners were crowned at the conclusion of the event.

Food and drink stalls were provided by local community groups over the weekend and the South Burnett Regional Council’s great camping facilities were put to good use by campers staying at the lake. The water level in the lake was 62 percent, which together with the good weather set the scene for a great weekend of camping, fishing and family activities.
Profits from the event are used to supplement fishing permit funds from the Queensland Government, and to date about 4.5 million fingerlings have been stocked into Lake Boondooma thanks to the combined funds.

The catch and release category for longest native (targeting Australian bass and yellowbelly) was won by Mark Bleys of Proston with a bass measuring 515mm. Mark took home the trophy as well as over $300 in cash and prizes. Dylan Brandley of Kingaroy put in a solid effort to walk away with the most fish (bass and yellowbelly) caught and released throughout the competition, with a tally of 17 fish.

The heaviest yellowbelly title in the adult section was claimed by Bart Fraser of Bli Bli with a fish of 2.175kg. Bart took home over $360 in cash as well as prizes and a trophy sponsored by Corey and Nikki of the Lake Boondooma kiosk. The winner of the heaviest bass title sponsored by Wondai Accounting & Tax Services was Lincoln Neal of Tara with a bass of 1.75kg.

Lincoln fished the lower end of the lake using bait to secure a pay cheque of $320 as well as prizes and a trophy. The Hanwood Fish Hatchery champion junior angler for yellowbelly was Alex Lindsay of Dalby with a fish of 2.25kg. The junior bass title was claimed by Brady Cullinan of Toowoomba after landing a bass weighing 1.46kg.

The 3.4m Bluefin boat prize proudly sponsored by Lake Boondooma kiosk and Bluefin Boats was won by Nicole Kussiow. Congratulations to all the winners and thank you to everyone who attended and made the event such a success. With over $20,000 raised for fish stocking, the future of the Lake Boondooma fishery is looking very healthy.

Next year’s competition will be held on February 11 and 12. Entry prices for the 2017 event will remain at $20 for adults and $5 for juniors aged 16 years and under. Additional information about the local area and past fishing competitions can be found at www.prostononline.info