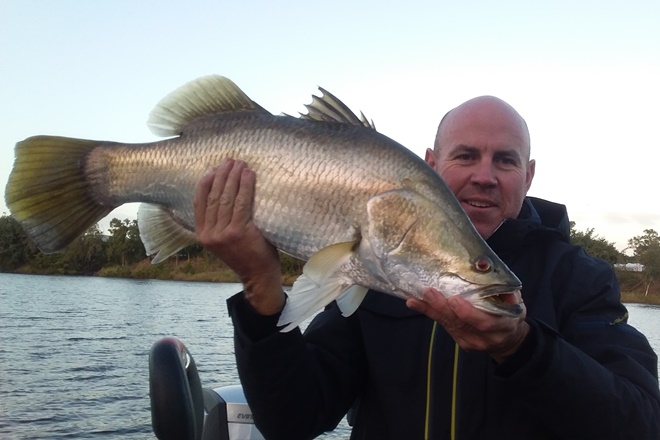 Glen Boys with the nice barramundi he landed recently.

It was fantastic to see a small break in the windy conditions around the Bundaberg area during this past week.  For some reef fishermen it has been months between outings, but this weekend and the first few days of next week are looking good to get out offshore and re-stock the freezers.  With no one being able to fish the wider reefs for ages, the coral trout, red emperor, sweetlip and mackerel should be well and truly on the chew.

With the slightly better conditions forecast over the next few days, the inshore reefs will be a good option for the smaller trailer boats in Bundaberg.  At this time of the year the school and Spanish mackerel come in thick right along our coast line.  Some quality grunter over 60cm and grass sweetlip should also be in good numbers on all of the popular way-points off Bundaberg, but as always, check your local forecast prior to heading out as weather conditions can change quickly.

Most of the action in the Burnett River over the past week has been from anglers prawning.  Good numbers of prawns have been caught right throughout the Burnett from the Port right up to Splitters Creek.  Some quality mud crabs have also been caught, so putting in a few pots this weekend would be a great idea.  With all the bait in the Burnett, bigger fish haven’t been too far away.  Already we’re seeing some really nice bream showing up as well as a heap of flathead and grunter keeping anglers entertained in this awesome river.

The boys who were up the Baffle last weekend reported that the fishing was a little slow, but the crabbing was on fire with some top quality bucks caught.  They also managed to pick up a feed of prawns in the cast net.  The fishing has been better in the Kolan with some cracker flathead and grunter caught towards the mouth, and still some nice mangrove jack, bream and the odd barramundi being hooked in the upper reaches.  People staying at the Miara Caravan Park have also reported a good run of crabs in the Kolan.

Even though the water level in this awesome impoundment is dropping around 15cm a week, most anglers are managing to hook up to ten barra between 50cm and 80cm per session.  Good numbers of barra seem to be all over this impoundment.  A quality side-imaging unit like the new Mega Plus Helix will make the job of locating the schools of barra a lot easier.  The hot lures that have been working well are the Lucky Craft Pointers and the Zerek Flat Shads.  Before you head up to Lake Monduran, drop in store and the boys will pin-point some hot spots on the lake to increase your chances of hooking one of these fantastic sports fish.

Hopefully the weather is better this weekend to get out and wet a line.  If you do manage to hook a few and you’d like a photo of you with your catch to be included with our fish report, take a snap and email it to info@tackleworldbundy.com.au.  Remember to include your name, the size of the fish and the approximate area it was caught.