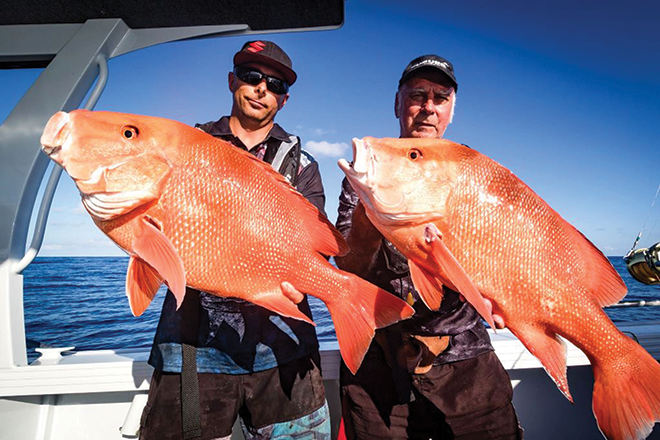 The author and his father Terry with some well-earned red emperor after sharks ate most good fished hooked.

I WAS recently asked by The Haines Group/Suzuki Marine team if I was interested in planning a fishing trip with them to the Breaksea Spit region, Fraser Island. The idea was to get a mixture of Haines Signature and Riptide plate alloy boats with Suzuki outboards up there to do some product testing in a remote offshore fishing environment.

This would also be my second good run with the all-new Suzuki DF350A I recently put on my Riptide. More on this later in the article. After lots of planning and a close watch on the weather, the stars aligned and we headed for Hervey Bay at lunchtime Friday.

We also had The Haines Group general manager Ryan Lloyd driving his big 2800 PowerCat Centre console with twin 200hp Suzukis by water from Manly to Hervey Bay to use as a storage and camera boat. I nicknamed Ryan ‘Captain Cook’ for the big drive he committed to and after an eight-hour commute by sea, he arrived at Hervey Bay for a refuel before continuing on with the rest of us.

We all headed for Rooney Point at the top end of Fraser Island, where we would stay the first night ready for an early departure offshore Saturday morning. Lucky for us, Greg Haines happened to be there already with his beautiful Maritimo and we all piled on this awesome boat for some drinks and a good laugh.

After a bit of sleep, we woke up at 3.30am ready to head for the bar. We also had keen topwater fisho Mathew Scholz in his Haines 543SF arrive ready to get in on the action as well. We all crossed Two Mile Channel on Breaksea Spit and it was the best I’d ever seen it.

It was exceptionally wide and had great water depth the entire way through the channel. We had planned to fish the Sandy Cape shoals where the two Haines boats would throw poppers and stickbaits for GTs and other pelagics while me and the other Riptide would troll lures and swim gar for pelagic fish.

Unfortunately, someone forgot to tell the fish to turn up and a couple of hours passed with minimal rewards other than some stinking barracuda and a few yellowfin tuna. After a slow start, we decided to go reef fishing.
With the other boats heading to one area, I decided to try another where I’ve caught reds on small isolated rocks before.

It started very slowly, with just the odd mixed reef fish from several rocks before I hooked a very solid fish that felt like a red emperor. Ryan and Suzuki’s cameraman Virgil were close by in Ryan’s cat ready to film some action when it happened.

They had drifted away, so I radioed through that I was hooked up. By now I had the fish well and truly coming up, so I slowed it down to allow them to film it hitting the surface.

Unfortunately, this wasn’t a good move and not far from the boat I got sharked and it was all over.

I was gutted and knew it was going to be a tough day. I went back for another drift and hooked another red. This time it was all on camera but I got sharked not long after hooking the fish and began playing tug of war with the shark.

Eventually it let go and all I pulled up was a bare set of red emperor jaws/lips, which was a first for me. Unfortunately, the shark problem continued, so I moved on and found some ground on the 100m line and we started pulling in pearl perch, rosy jobfish, venus tuskfish and maori cod.

With the fishing slowing, I decided to spend a few hours searching for new ground in 50m of water and I managed to mark about 15 small new rocks in a relatively small area. We went back and started fishing these rocks and while we pulled in a good mixed bag of reef fish, all the decent fish were sharked time and time again.

After going through loads of hooks and rigs, it became hugely frustrating because we lost about 10 nice reds before we pulled the pin and headed back to Roonies to meet up with everyone else. On Sunday we decided to take a different approach.

We arrived at the northern section of Breaksea and the pressure was on because I had Virgil on board ready to capture some action. I came over a nice show of fish and swung the boat around ready to drop. My bait had hardly hit the bottom when I got a solid thump and sunk the hooks into a quality fish, buckling the rod over.

I looked over the other side of the boat to see my old man hooked up too. I’ve never been so nervous trying to land a fish and I was hoping the sharks would leave them alone so we could put some decent fish on the deck. To my relief, two school-sized reds came over the side and I don’t think I’ve ever been so happy to see the colour red.

I’ve been lucky to have an almost 15-year run of catching reds every trip I try for them and I was starting to think this was the trip where I might finally break my long red emperor run. We continued to drift that same spot and unfortunately, like the 50 or so spots we had already fished, the sharks soon found us and cleaned up any good fish we hooked.

I kept moving around and we picked up various reefies including a thumping spangled emperor of about 8kg but spot after spot the sharks gave us a hiding, so I headed for the 100m line and found a big show of fish. The fish were on the chew and we were pulling in big venus tuskfish, maori cod, pearl perch and yellowtail kingfish one after another.

After an hour or so the fishing slowed, so we came back to the 50m area and fished new and old spots but once again the sharks ate any good fish we hooked. By now it was the middle of the day and the seas were a glass-out.
Fishing was getting tough, so I went to a spin outfit with 40lb line with a 5 ball sinker to try to better present the baits and get the fish to bite.

Straight away it started working and I had various reefies coming over the side including a very solid amberjack that gave me a real workout. This fish was followed by another huge spangled emperor before coming across another nice show that produced a red emperor of about 8kg.

I couldn’t believe my luck.

I was catching good fish on light line and wasn’t getting sharked. Unfortunately, that luck soon ran out and both Dad and I were hooking great fish but getting sharked over and over. All you can do is drive away when the sharks turn up like that because it’s a complete waste of good fish and you will rarely beat the taxman.

The other boats were experiencing the same problem but still caught a good feed including Rory landing his first legal red and James boating a nice green jobfish. It was now late afternoon, so we decided to pull the pin and head for Roonies to meet up, have a swim and exchange stories with the other boats.

Matty Scholz and Ryan’s camera boat had a good day inside Hervey Bay catching longtail tuna but it turns out they had huge issues with the sharks as well, which was no surprise. All in all, it turned out to be an excellent weekend with unreal weather, good company and some fish on the deck.

The sharks were the worst I’ve ever seen and made it extremely hard to land fish and remain patient with the constant re-rigging. Hats off to the entire crew at The Haines Group/Suzuki for thinking outside the box and wanting to put their boats and outboards through real-life fishing situations.

If you would like to fish the Breaksea Spit region, be sure to grab a copy of my DVD Breaksea & Beyond, which will give you all the information you need to fish this area.

As mentioned earlier, I recently put the all-new Suzuki DF350A on my boat. Many readers might remember an article I wrote last year on the new Suzuki DF250AP I had fitted to repower my 7m Riptide. The performance and economy from this outboard was nothing short of brilliant and after a year of use, Jon Eadie from Bayside Suzuki Marine, in conjunction with Suzuki Australia, gave me an opportunity to try out the Suzuki DF350A and put it through its paces.

This 4.4-litre V6 Lean Burn outboard runs a duo prop setup, which is vastly different to what the outboard market has traditionally used. Duo props offer exceptional grip/thrust, eliminating a huge percentage of slip that conventional props suffer from.

This equates to better fuel efficiency and overall performance. During testing, I was blown away by the sheer thrust it produced and if you weren’t holding on, you’d be out the back in a split second. The DF350A is about 40kg heavier than the DF250AP but I noticed it didn’t weigh the boat down in any way, rather the opposite.

The duo prop creates a lot of lift in the rear, making it feel lighter, and I found myself giving it more positive trim to bring the bow up compared to single-propped outboards I’ve run in the past. Though duo props were never designed for top-end speed, it still reaches just under 50 knots at 6300rpm, which is surprising considering my hull speed isn’t usually great due to having a large fairing block in the keel that houses three through-hull transducers just forward of the transom.

When I had this installed, my old Suzuki DF225 lost about five knots of top end and it noticeably reduced my fuel economy. Now the big question most want to know: what’s it like on fuel? Well, for a big outboard it’s surprisingly good and not that far off the DF250AP I was running.

Naturally, I expected the 4.4-litre DF350 to use more fuel than the four-litre DF250AP due to being a larger capacity engine and the fact that the DF250AP was ideally suited to my boat and wasn’t underpowered in any way.
Fuel usage testing in calm conditions inside Moreton Bay punched out some great figures, with its best numbers between 3000rpm and 4000rpm.

Check out the table for the figures I recorded.
Fully loaded for big offshore trips carrying 520 litres of fuel, 300kg of ice and loads of gear, it still gets 1.1-1.4km/L depending on the conditions and current, which is exceptional for such a big outboard.