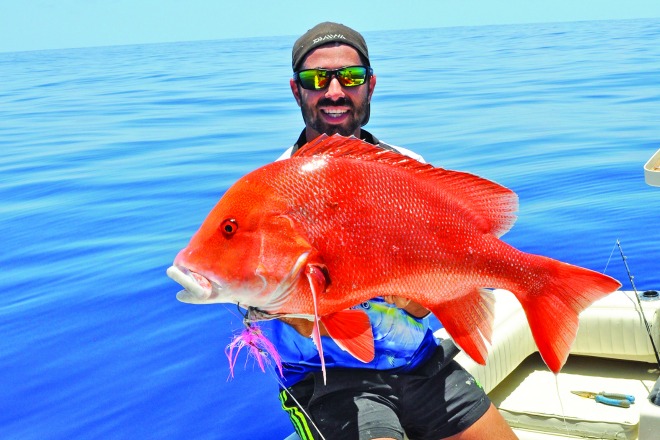 I’M sure many anglers will agree with me when I say the holy grail of reef fishing is the almighty red emperor.

Red emperor is one of those species that you don’t just get lucky with. Catching big reds involves hard work, good-quality sounders and fresh baits.

Red emperor are predominately found in the northern waters of Australia but have been spotted in areas as far south as the Gold Coast. Because the climate is changing and we’re seeing record-breaking water temperatures almost every summer, we are hearing more regular stories of people catching reds out of Brisbane and the Gold Coast.

The Bats crew is based in Brisbane and we have grown up with reef fishing as our bread and butter. We fish anywhere from Tweed Heads up to 1770 chasing trophy reef fish. When it comes to red emperor we usually head north to Fraser Island or 1770 because as we all know, the further north you go, the easier finding reds seems to be.

Perfecting the art of chasing reds is one of those things that takes a couple of trips on the water and a hell of a lot of driving around and sounding for reef structure. We have noticed that large reds will not school up as much as the smaller ones, and nine times out of 10 they will be caught with very little surrounding reef structure, sometimes almost in the middle of nowhere.

The smaller fish from 3-10kg will school up on 1-5m rises and can be extremely fun to chase with lighter gear.

When it comes to water depths, we tend to chase reds in 60-80m of water. Although a lot of people catch quality fish in the shallows, this range is where we have had our best luck and found the right structure.

It is important to keep in mind the fact that red emperor are bottom fish, and at night they are quite hard to pick up on the sounder. Just because the rock you’ve drifted over doesn’t show any fish does not mean it is actually holding no fish. Many times at night we have drifted over little rises that have read nothing yet produced quality reds.

When chasing reds, we believe it is important to use the right gear and fresh baits.

Fresh baits could be anything from a whole squid to a whole hussar fillet. The big baits are then fed onto a series of 7/0 Striker hooks ganged with an ELKAT fly on the top hook. The series of hooks is then attached to a single dropper paternoster on 80lb mono.

One thing we have noticed with schooling reds is sharks are usually hanging off the reef structure, waiting for something to fall out of place. There is nothing more disappointing than bringing up a red emperor head, and unfortunately it happens quite often.

While many people go on about certain times of year and moon phases for red bites, we have recorded every fishing trip where we boated reds, and the times, moon phases and seasons have been different on each occasion. When fishing the Fraser region on a full moon we have noticed the fishing is hot at night and slow during the day.

Whereas we have found the opposite further up the coast. We could land five solid reds on a full moon at night and then go back to the same spot the following full moon and not even land one.


When reds are on, they are really on, but they can be easily spooked. We have noticed that all it can take is a couple of bust-offs for them to go completely off the bite.

This is why I strongly recommend people put in the hard yards and find as many red locations as possible so you can hit all your spots in a loop during the one fishing trip. It is important to let reds do their thing during the fight.

A lot of people think that because red emperor have such a powerful initial hit, it is a good idea to lock the drag and get them off the bottom. In our experience with chasing reds, all you will gain from a locked drag is popped or straightened hooks or broken knots.

I encourage any angler who is willing to further his or her knowledge about chasing reds and learning new techniques to get a copy of Greg Lamprecht’s Wicked Fishing DVDs because he covers numerous good points and gives you a great head start. Red emperor require a lot of persistence and many hours of searching to find that spot X.

At the end of the day, we all want that spot that no one else knows about, and it all begins with persistence and dedication.