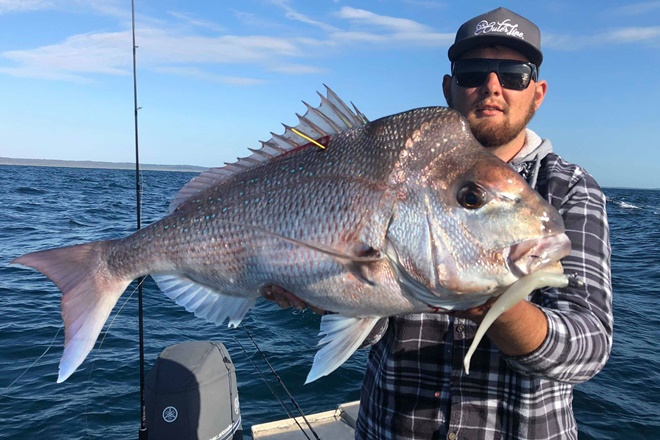 Kaspar with a beast of a shallow water snap.

AT the end of my last article I mentioned I have been doing as much offshore fishing as I possibly can, and it’s safe to say I have become addicted to this awesome fishery right on our doorstep.

I have been focusing the majority of my efforts on targeting big Brisbane snapper, but I have been picking away at a couple of different species including spangled emperor, spanish mackerel and pearlies. Being relatively new to offshore fishing, I am still learning lots, but applying both old and new techniques I have had very successful trips. I have been crossing the South Passage Bar and heading to different reefs in shallow and deep water on the hunt for a trophy snapper.

The shallows in close to Cape Moreton and Point Lookout have held good size fish lately, but they are generally spread out over the large areas of reef they inhabit. I have caught the majority of my fish on 7” jerk shad soft plastics, and depending on current and the speed of the drift, I rig them on 3/8-3/4oz jig heads generally with a 6/0 or 7/0 hook. Because lots of small picker fish inhabit the shallows I don’t really like to use bait, as they will find it before a snapper will, but I have caught a couple of nice fish on lightly weighted float-lined pillies when the situation allows.

Recently, good mate Kaspar and I found a large school of spawning snapper sitting on top of a very isolated bit of shallow reef. The current was roaring, so I selected a 4 ball fluorescent sinker, a gang of two 6/0 7766 hooks and a large IQF pilchard and started to float it back. I rigged my hooks the same way I discussed in my last article, separated by a small swivel with a bigger swivel connected to the top hook. This eliminates line twist and helps your bait sit more naturally.

My pillie got absolutely slammed on the way down, so I clicked the lever into gear and swung. After a short fight a snapper of about 4kg was on the floor of the boat. We positioned the boat for another drift and this time I stuck the float line in the rod holder and cast a plastic ahead of the boat. The plastic got nailed before my floater did, so I was too preoccupied fighting the snapper on my spin rod to notice the line flying off my overhead. Among the chaos, I think Kaspar was having similar ‘problems’. I reached back and managed to slide the reel into gear to hook the fish on my other rod, so as soon as I had one fish in the boat I jumped back and grabbed my Venom overhead from the rod holder.

Instantly I knew this was a much better fish, and with line peeling off my reel at a rate of knots I stuck my thumb on the spool in an attempt to keep it off the bottom. I was also quite worried about a shark nailing the fish on the way up, so was keen to keep the fight as short as possible. Soon I saw a silvery red glimmer sliding up the water column and a solid knobby broke the surface. I grabbed its tail and hauled the chunk into the boat. Measuring 84cm, it was a new PB for me. I stuck the fish with a tag, snapped a couple of quick photos and sent it on its way as we already had our bag limit.

The action didn’t stop there, with the next drift seeing both our float lines demolished again. Amazingly, I had upgraded my PB yet again with an 88cm model. This fish came from a triple hook-up, with both float line setups and a plastic getting eaten. The next hour was a blur of action, with bust-offs as well as a couple of big spangled emperor thrown in. We ended up tagging two spanglies at 72cm and 77cm, 20 snapper over 70cm long, as well as keeping our bag on snapper between 55cm and 75cm.

We haven’t had the same feeding frenzy in other sessions chasing the Brisbane snapper but have been able to put away a couple of quality fish, including half a dozen giant spangles, with the biggest models going 80-85cm long. They are especially brutal at this size and very dirty fighters on 20lb plastic gear. Fishing the deeper fringes of reef northeast of South Passage has been hit and miss for me lately. Weather, current, work and school haven’t aligned for me to be fishing my favoured moon phase out deep. I really like when the moon is rising in the early afternoon, as typically the wind drops for an afternoon glass-out and the snapper begin to bite.

During a recent afternoon session I raced out to the 29s for a quick fish. The moon was just about to set when the sounder discovered a big school of bait with snapper feeding on them. I made the first drop with a 7” white Berkley Gulp jerk shad and it got absolutely nailed by a quality snapper of 75cm. My mate, who had never caught a fish on a plastic, was blown away at how effective they are. Once the moon set, the bite became very tough, but we managed a couple more squire as well as one very lost school mackerel.

The following weekend I took my old man Glen to the same mark, where he hooked a massive snapper on a float line, only to have the knot on his snell rig come undone. I suppose that’s what you get for not testing your rig before deploying it. I don’t think Dad will try another one anytime soon.

During another hot session out in the deep blue, family friend Chris Britton, his son James and I enjoyed a very hot float line bite on snapper, followed by cracking pearlies taken by micro jigging. We had our bag on snapper by 7.30am, with each of us nailing a 70cm-plus fish. Young James caught one standout knobby that he managed to nail on my float line rod after I asked him to hold it while I rigged up a plastic. Hats off to him though, as he fishes harder than most 11-year-old kids I’ve met. James’s big snapper measured somewhere in the mid-80s and was almost too heavy for him to hold up.

Once we had our bag on snapper we moved to some deeper isolated pinnacles to target pearlies. We upped our sinkers to 8 balls and tied on Infish Jig It 75g micro jigs. James and I had an instant double hook-up on the micros and Chris was bent on the float line. They were all solid fish of 55-60cm, which are good pearlies by any standard. The action continued into the afternoon until we decided to pull the pin because the Esky lid wouldn’t shut and we were more than satisfied with our efforts.

Paying close attention to your fishfinder can pay dividends when fishing offshore. During another session in deeper water, while both float lining and plastic fishing Kaspar pointed out a fish on the big Humminbird Helix 12 ascending the water column, and as if on cue his floater went off, with a squire of about 3kg the culprit. That afternoon we stayed out until sundown and managed a couple of squire in the 60-70cm range, as well as a few pearlies and other mixed reef fish. Plastics and float lines again got the job done.

I like to bring two or three rods offshore with me when hunting snapper. I have been lucky enough to get my hands on some of the top-quality Venom rods from the Wilson Fishing stable. The PE2-5 Venom overhead has to be the nicest float lining rod I have ever used, and all my fishing mates agree if they get an opportunity to use it. I have coupled this rod with a Shimano Torium 16HG reel and PE3 ATC Salt Alliance braid. I like to run 30lb leader because I find I get more bites fishing a bit lighter, and the same goes for my plastic setups. Sometimes I will even drop down to 20lb if the bite is tough.

For my plastic setup I run a 4000 size ATC Valour spin reel paired with a 12-30lb Venom spinning rod. I run 20lb Zerek Hy-Braid as I find it breaks at a much higher strain than other 20lb lines and is much more abrasion resistant than other braids, which is definitely a benefit if you hook a giant snapper keen on getting back to the bottom. I’m really hoping I can get out a few more times before the end of the season because I still have marks and reefs I haven’t ventured out to just yet.

Our annual trip to Hinchinbrook Island is approaching very soon too, and as the days go by I am getting more and more excited. Please be respectful of other vessels on the water and remember size and bag limits to ensure a viable future fishery for everyone.