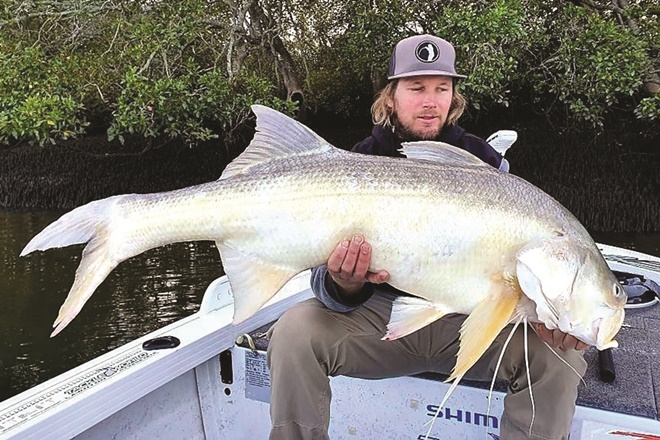 THIS month will see winter coming to end.

Towards the end of the month the weather generally starts to warm and we might even receive a couple of afternoon northerly breezes. In years past I’ve had good success on mangrove jack in late-August. Most anglers believe it’s too early for mangrove jack to be getting active, but if you’re willing to make plenty of casts, the rewards are there. Flathead will still be very active during August in the local rivers, but once spring arrives the numbers will thin.

The spawning season for flathead will start on the Gold and Sunshine coasts towards the end of the month. The big breeding lizards make their way out to the mouth of the estuaries to begin spawning with the smaller males. This normally coincides with a new or full moon towards the end of August. Jewies and threadfin will still be feeding in the local rivers, with good-quality fish among them.

A lot of jewies in the 65-75cm range have been caught this winter, which is a really good sign. These smaller fish have been a bit quiet for a few years, but there is no shortage of them in the local rivers at the moment. Fish this size are often very aggressive and will belt a soft plastic aimed at flathead. They’re not shy and can tend to roam areas with no structure or shelter to hide in, such as sandbanks and barren straits in the rivers.

As long as bait is in the area, it’s likely a jewie will be close by. Jewies eat a wide variety of lures. Three-inch and 4” fish-profile soft plastics are always a good option, but prawn imitations also work really well. Soft vibes including Zerek Fish Traps also entice a lot of fish. Hard-bodies catch good numbers, especially deep divers trolled through holes and rock bars. My all-time favourite lure for chasing jew would be a Gulp Crazy Legs in New Penny.

This plastic has caught heaps of fish for me over the years and it’s generally the first lure I’ll tie on when chasing jewies. Crazy Legs catch just about everything with fins. Threadfin are another species that can’t resist Crazy Legs and flathead are very fond of them. Jacks also show a lot of interest in Crazy Legs, especially between the lakes at Noosa.

Speaking of the Brisbane threadfin salmon, they have been a little quiet in the smaller rivers this winter, but what they have lacked in numbers they have made up for in size. Some absolute beasts around 130cm have been caught on lures in a couple of the local rivers. Most of these fish have been hanging around in very small numbers and often on their own. This can make targeting them very difficult and it can take a lot of time to get a bite from one.

Once hooked, they are a real handful, with blistering runs and lots of directional changes. Threadfin are masters at rubbing through leaders with their sandpaper-like mouths, so a heavy leader is good insurance. Unfortunately, they can shy away from heavy leaders and dropping down to 12-15lb is often needed to get the bite. Fish hooked down the throat on light leaders rarely last a couple of seconds on the line. Striking hard and fast at any bite is the best way to keep the lure from hooking up down their throat, but sometimes it’s unavoidable and the inevitable happens.

The Brisbane River will still fish well for jewies and threadfin this month. I’ve found August to be one of the better months for school-sized fish in the 70-90cm range. Sounding along the wharves looking for schools of fish will work, as will jigging the rock ledges with Gulp Crazy Legs and prawn-imitation plastics. The fish sit tight into any ledges and pinnacles that give them somewhere to rest out of the current when it’s running hard. When the current starts to slow, the jewfish will move around and feed on any baitfish in the area.

This is a prime time to get a lure down into the strike zone. Jewies can be a bit leader shy at times, just like threadfin. Thankfully they find it hard to rub through leaders. During the fight you can feel the leader rubbing across their teeth when they are hooked deep. I’ve landed lots of nice jewies on 12lb leader that have rubbed the leader on their teeth through the whole fight. It’s still not a great feeling when you load up on a big fish and can feel their teeth running across the leader.

Trevally numbers are excellent at the time of writing. The Pine and Caboolture rivers both have plenty of fish willing to eat a lure. They range from small 20cm fish right up to 70cm-plus models. Trevally of the larger size put on a real show when hooked and are great fun to target. They are feeding machines and will swim up and down a stretch eating everything in their way. Trevally aren’t too fussy about what lures they will eat, but you won’t go wrong with a 3”-4” fish imitation or soft vibe. That’s it for this month.

Get out there and enjoy the last month of winter and I might see you on the water.