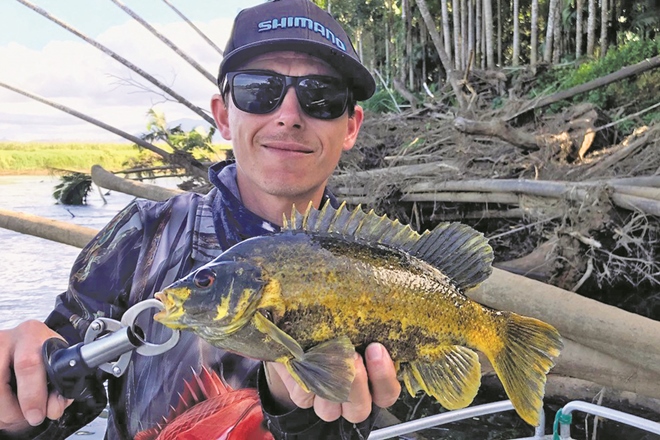 Check out the colouration on this specimen.

I RECENTLY had the pleasure of taking a keen angler on a bucket list fishing trip in tropical north Queensland.

He had set himself up with a couple of trips arranged through Fishing Cairns, one out to the reef to chase GTs and the other up the river with me to chase jungle perch and sooty grunter. The trips were a birthday present from his wife. As with a lot of keen anglers, Clark brought his own gear, ideal for the light tackle action I had in store for him.

The trip up the river was enjoyable as always, spotting many crocodiles, sea eagles, a jabiru and many other bird species. With the water levels dropping, we made it as far up the river as possible and then started our drift. As usual in my experience, the first 15 minutes produced little action as the fish settled down after the boat hurtling upstream.

It wasn’t long before Clark was onto his first sooty, and there it was, the first species ticked off the list on this bucket list fishing trip. He was impressed with how hard the little fish hit and fought all the way to the boat. Is it any wonder sooties are right up there when experienced fishers are asked about their favourite species to target with lures?

I know I never tire of catching them. As we fished on, the catch rate increased and Clark relished the action in the crystal-clear water. Clear water can be problematic for inexperienced anglers, with fish following lures out from shadows and structure only to see the boat and peel back to cover.

In times like this, accurate casting increases the hook-up rate as fish will make reactive or territorial hits on the invasive lures. Put the lure a metre from the fish, it will come and investigate; put the lure on its head and you will get a more instinctive reaction.

The next fish on our bucket list fishing trip was jungle perch. A lot has been written about this little gem of the north. We drifted down on a JP hot spot and I slowed the boat with the aid of the electric motor to allow Clark to get a few casts into the spot.

The backwater produced as it usually does, and a healthy big sooty came out and engulfed Clark’s lure. It wasn’t long before the JP was added to Clark’s completed list bucket list.

It was a classic catch as well, with a well-directed cast behind a huge root ball of an upended tree. As the lure began its way back to the boat, it had to make it over a root running parallel and 6” below the water’s surface.

We could see the lure inching closer to the apex when the JP appeared out of nowhere and hammered the lure. Thankfully the fish came over the obstruction with no problems, but it was heart-in-mouth stuff for a split second.

As a guide, it is always very pleasing to see angling skills rewarded when out on the river. We’ve all put in accurate, well-guided lures on the spot and not been rewarded with a strike.

To see visitors to the region come out, hit the spot and get the rewards is very satisfying. The beauty of fishing in these clear waters is even if my clients cannot put a lure on a ha’penny, they see hundreds of fish during the charter.

A much better experience than casting all day and not seeing any fish at all.