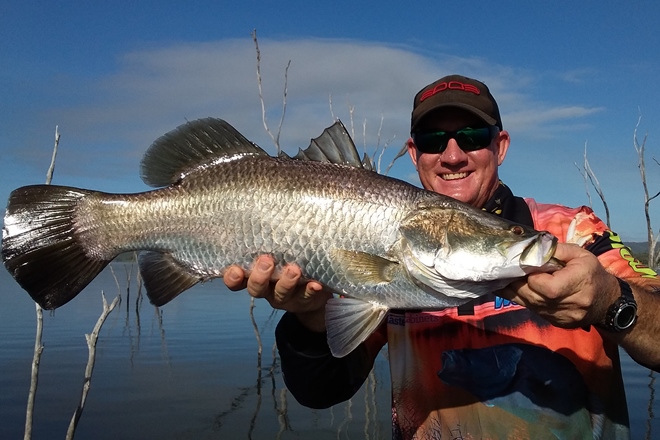 Bundaberg barramundi and bream on the bite

With this being the last weekend of the school holidays, I can’t think of a better way to finish the break than by hooking into a few fish around the Bundaberg region.

As mentioned last week, a lot of our local rivers are starting to clean up nicely and some really nice fish have been caught during this past week.

Both Baffle Creek and the Kolan River are still running a little dirty, but both are starting to fish very well.

Big numbers of small prawns are present in both systems and their size should improve over the next few weeks.

Mangrove jack and some nice grunter and bream have been caught on a regular basis in the upper reaches on soft plastics, vibes and baits.  Down towards the mouths, big queenfish, dart, flathead and some monster whiting have been keeping the kids entertained over the school holidays.

The Burnett has bounced back nicely with fish being caught right throughout this system.

Up around the Splitters Creek sand bars, some cracking flathead and summer whiting have showed up, while the Town Reach is full of big bream and the odd mangrove jack.

From Kirby’s Wall down to Rubyanna Creek, some nice grunter, blue salmon and sicklefish have been testing anglers’ drags.  Around the mouth, heaps of estuary cod are along the rock walls and, when the weather allows, a few school mackerel are out along the coastline.

The Elliott and Burrum Rivers have also seen nice catches of flathead and grunter towards the mouths.  Further upstream mangrove jack have been active with the new Flick Prawn from Chasebaits working extremely well lately.

On the fresh water scene, the Bundaberg barramundi at Lake Monduran have been back on the chew.  Early morning sessions using small suspending hard body lures have been successful, with the Rapala Shadow Rap a must-have if you’re heading up to the dam.

Just finally, congratulations to all the Bundaberg barramundi anglers who fished the Basstastic Barra comp at Lake Awoonga last weekend.  Heaps of barra to 75cm were caught and it was awesome to see that everyone who participated got some fantastic prizes and had a great time.