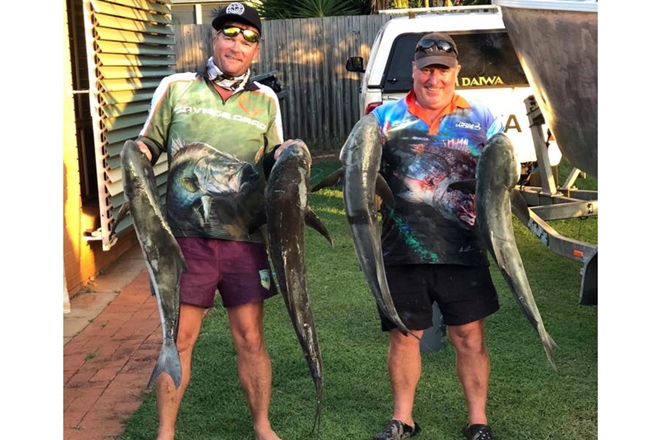 How good was it to see that perfect offshore forecast last weekend and early into this week?  After months of waiting, we were blessed by the conditions and most anglers who headed offshore caught some really good-quality fish.  The islands and shoals produced some ripper coral trout, red throat sweetlip, red jew and a good mix of reefies.  The gutters and wrecks also produced a good mix of grass sweetlip, red jew and big amounts of cobia and Spanish mackerel.  A lot of parrot, stripeys, hussar and a few cod also made up the mix of the catches.

The inshore reefs also produced a good mixed bag of species.  The Cochrane Artificial, Ryans and the Two Mile all produced plenty of school mackerel, a few Spanish macks and a few tuna.  On the bottom there was a few big grunter and grass sweetlip.


BAFFLE CREEK AND THE KOLAN RIVER

Both of these systems have really started to clean up and come good, with some really good quality fish being caught.  The mouths are producing plenty of whiting and flathead with a few big grunter coming out of the channels.  Further upstream along the rock banks and deeper holes there has been a good number of mangrove jack and a few barramundi about, but with water temperatures cooling, it seems to be the live baits doing the job.

The good old Burnett just keeps producing some red hot fishing.  The mouth has plenty of trevally, queenfish and a few school mackerel getting about.  All the rock walls are holding good numbers of big bream and the odd mangrove jack.  Some of the deeper holes have got a few grunter, cod and salmon getting about, and soft vibe lures have been doing the trick.  Further upstream on the sand bars, there is plenty of bream, whiting, flathead and a few sickle fish, mainly by fishing the last of the run-out tide.  Rumour also has it that a few prawns and crabs are still on the move.

The Elliott is still going okay with plenty of dart, whiting and golden trevally getting about the mouth.  Shark’s Nest has seen a few jacks and barra being caught.  Live-baiting seems to be the best.  Upstream on the snags has seen plenty of jacks.  Using lures such as prawn imitations has been working well.  There are also plenty of crabs about in this system.

The gravel beds in the Burrum are holding good numbers of grunter.  Upstream has seen a few barra and jacks and plenty of prawns.

Plenty of barra have been caught in Lake Monduran this past week, with most of the barra being caught up in the “B” arm of the dam.  Barra to 85cm have been caught on soft vibe lures or Jackall Squirrels.