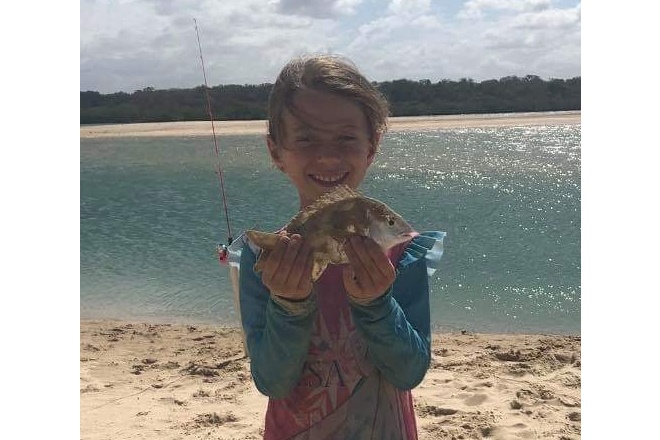 Maddison Moore with a bream she caught and released last weekend.

Bundaberg estuaries firing on all cylinders

The Burnett has been fishing unreal over the past week.  Plenty of trophy-sized grunter and flathead have been caught.  Fishing the Town Reach has been the hot spot and is one of the most protected areas out of the wind.  Using soft plastics and small soft vibes have been the standout techniques.  The bream have really started to chew with the cooler weather we’ve been experiencing.  Small Z-Man Grubz and small baits have been doing the damage.  Also, there has been some ripper barra being hooked in the deeper holes.  Using live baits such as poddy mullet and throwing soft vibes is the way to go.  Don’t forget to put the crab pots in for a fresh feed of Easter crabs.  The full moon tides will have the crabs on the move!

The Baffle has been firing on all cylinders over the past couple weeks.  The numbers of awesome-sized queenfish at the mouth has been unreal to see.  They are great fun to catch on light gear with all their aerial jumps and head shakes, and they are pretty tasty when eaten fresh.  With the full moon tides, pumping fresh yabbies and chasing whiting, bream and flatties with the family will be an ideal way to spend your Easter.  The whiting should be in good numbers this weekend.  Don’t forget to chuck the cast net in the boat because you never know when those tasty prawns will turn up.

The Kolan has been the standout river for jacks and barra this week.  Slow retrieving 4” Z-Man Minnowz from mangrove roots and over rock bars has been the way to go to catch those big angry jacks.  Live-baiting in the deeper holes seems to be what the big lazy barra have been taking a liking to.  We’ve also heard of some very good reports of crabs up there so be sure to throw your pots in.  I’ve had a report from a couple of very happy customers who have caught 40cm+ whiting up there on beach worms lately.

The Elliott has still been producing the goods.  The standout catches down there over the past week have definitely been the dusky and sand flathead.  Most have been caught on small pink soft plastics.  Beaching your boat at low tide and walking the sand bars is the standout technique that I’ve found to catch good numbers of flatties.  Make sure you don’t forget your cast net because there’s plenty of rumours of a few prawns down there.

Lake Monduran is still fishing very well.  With the full moon falling on Friday night you’d be crazy not to give barra fishing a go over the weekend.  Again, the Jackall Squirrels are your standout lures but don’t forget to throw a surface lure in the early hours of the morning.  That crazy surface barra bite could make your Easter.  I would definitely be fishing the shallower banks because that’s where you’re going to find the warmer water.

Keep it real and have an awesome Easter