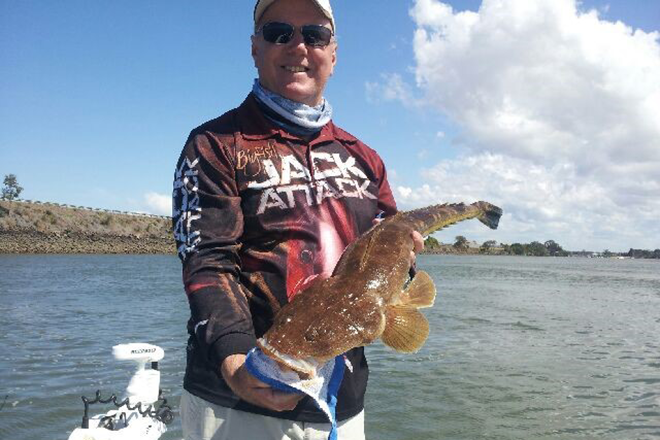 Shane Anderson with the 73cm flathead he caught recently.

BUNDABERG OFFSHORE
The offshore forecast this weekend is a hard one to call. It’s definitely a good idea to look at the updated forecast before heading out. With the small tides leading up to the full moon the fishing should be red hot! It should be a perfect weekend to chase reds in the deep. Again, your fresh flesh bait will be the most effective bait. Your red throat and coral trout should be on the chew in the shallows as well. It’s hard to beat using pilchards and a lightly weighted sinker while targeting them.

INSHORE REEFS
The inshore reefs have been fishing very well. The Spanish mackerel are in awesome numbers. They seem to be eating on small bait fish, so make sure you keep that in mind. Also there’s good numbers of squire on most of the inshore patches. The best way I found to catch them was on 20gr Samaki Vibes last weekend. Also, don’t forget about the horse grunter getting around. Most guys are catching most of these at night.

THE BURNETT RIVER
The Burnett River fished really well over the last weekend. Awesome numbers of bream were caught, mostly being caught on mullet gut and prawns. The flathead seem to be on the chew as well. The 3” Zman Minnowz plastics have been the go-to plastic. There’s still been good reports of barra and jack being caught everyday so it’ll definitely be worth your time to chase them. With early morning and late arvo lows that will be a hot time to target them.

ELLIOTT RIVER
The whiting are still on up the Elliott, with whiting being caught well over 35cm by most people. Also there’s been good numbers of jack being caught towards the back of the river. The outgoing tide is definitely the tide to target them. Don’t forget your cast net because there’s also been a few prawns starting to show up.

BAFFLE CREEK AND KOLAN RIVER
The Baffle and the Kolan are still fishing excellent for your grunter and flathead. Both soft plastics and live baits are working a treat. The start of the incoming tide has been the hot bite. Also there’s plenty of barra and jacks in these systems. Your vibing lures and hard bodies are a good way to target these fish. There’s also plenty of whiting feeding on the yabbie banks, so it’s definitely worth a go to target a tasty feed of them.

LAKE MONDURAN
Lake Monduran is fishing the best we’ve seen in a very long time! The standout lure is still your faithful Jackall Squirrels! Again your early mornings and late afternoons are your hot bites.

Don’t forget – the Win Television Lake Monduran Family Fishing Classic is being held next weekend, the 20th and 21st October. This will be the 20th year and it’s looking like it’s going to be a cracker! There are heaps of lucky draws for the whole family, as well as the major lucky draw of a boat, motor and trailer package. There are also daily catch prizes on offer. Nominations can be paid at Tackle World Bundaberg until Wednesday, 17th October, or you can pay at the dam on the weekend. More information can be found at http://masa-fishstocking.org.au/2018-registration-form/

Till next time, keep it real
Mitch Beyer