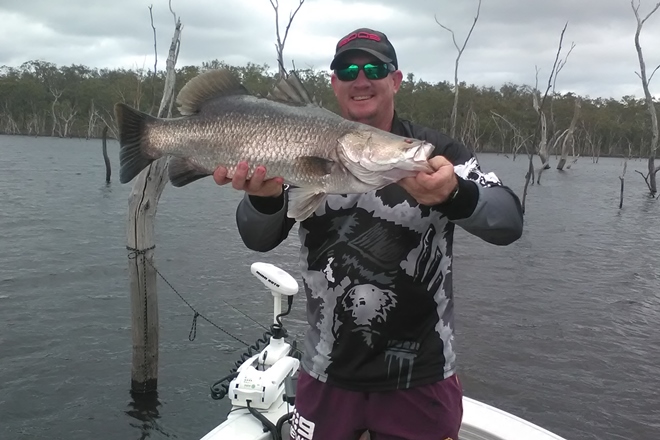 Dale Smith with the 70cm barramundi he caught at Lake Monduran recently.

With a bit of luck, this weekend’s Bundaberg forecast isn’t looking too bad.  The southeasterlies are predicted to blow less than 15 knots, which may present a small window for the bigger boats to explore the wider grounds.

With the full moon during this week, there will be bigger tides around Bundy this weekend, but it should be worth a crack.

By all reports there are good numbers of mackerel, queenfish and mac tuna right along our coastline.  Trolling deep diving lures or casting metal spoons or blades such as the Strada X-Blades has been working a treat.

Once again, the Burnett has been the centre of attention.  The Tattersalls Fishing Club had an outing on the Burnett last Sunday, and big summer whiting, bream, grunter and heaps of small queenfish were keeping everyone entertained around the town reaches.

All the rock bars and walls in the Burnett and Kolan rivers are producing good numbers of bream.  Let’s hope this continues and we’re in for another awesome bream season as the weather gets cooler.  Once again, most of the better fish have been hooked on the first hour of the run-in tide.

On the freshwater scene, we would firstly like to congratulate Jordan Renz and Braden Schuch, two local Bundaberg lads, who won the latest Bass Nation round at Lake Boondooma last weekend.  This was a fantastic effort considering they were competing against some of Australia’s best bass anglers.

Lake Monduran was on fire last week.  Barramundi between 60cm and 80cm have been caught during this past week on a few different techniques.  Large paddle-tail style soft plastics like the hollow Core-X 5” to 7” Swim Baits from 6th Sense, and large suspending hard body lures like the Jackall Smash Minnow are all working well at the moment.  This is a fantastic time to fish this impoundment before winter hits.