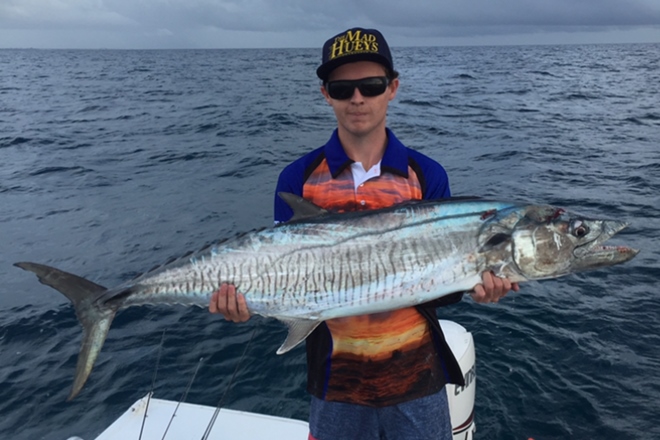 Mitchell Beyer with a solid Spanish mackerel he caught off Bundy last weekend.

What a difference a bit of good weather makes!  With the lighter winds last weekend, it was awesome to see so many people out and about making the most of what Bundaberg has to offer.

The inshore reefs fished extremely well last weekend.  A few switched-on young anglers had some amazing sessions with large Poppers and Stick Baits over the shallow reefs off Bundaberg.

Large schools of tuna and queenfish, with the odd 20kg+ spanish mackerel and giant trevally mixed through them tested the anglers’ skills and equipment.

With all the hot weather, the mangrove jack have continued to play the game.  During this past week we’ve heard lots of reports of barramundi, mangrove jack, grunter, flathead and large summer whiting, and all these species should only improve as we approach the full moon on Monday night.

Good reports have come in from the Baffle this week.  Some really nice grunter and jack have been caught throughout this system, both on lure sand baits.  As well, a few big whiting and flathead have showed up around the many sand bars around the mouth.

On the fresh water scene, Lake Gregory has been the place to go to catch a few Australian bass.  These hard-fighting sports fish have been responding well to Poppers worked close to the weed edges.  Once the day warms up, Spinnerbaits have been doing the trick in 10-15 feet of water.

The good news is that Lake Monduran Sponsor A Barra Inc has raised enough funds to start a feasibility study for an electronic barrier to save the barra in Lake Monduran from future flooding.

I’m planning a trip up to Lake Monduran on Saturday night.  Good numbers of barra seem to be back in the main basin and Bird Bay, and with the northerlies that are predicted this weekend, it will be a good place to start.