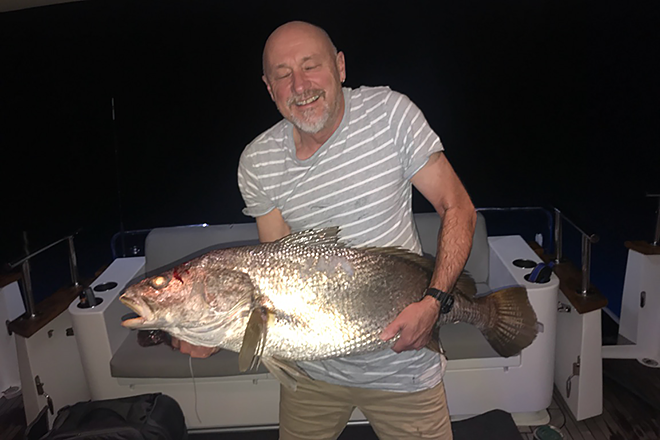 Simon Butler with a black jewfish.

At this stage, the forecast for the Bundaberg area is looking good for some more offshore action, although as we know, the weather can be unpredictable so it’s always worth checking the latest weather forecasts before you head out, or even call your local VMR base for the latest weather information. As for the fishing, a few days earlier this week saw plenty of reds, coral trout, sweetlip and tusk fish all making up some quality catches. There’s also a good number of cobia, Spanish mackerel and yellowfin tuna about. Trolling lures has been the way to go with the Halco Laser Pro 190 being a stand-out.

There’s a good number of school mackerel hanging around the likes of the Cochrane Artificial Reef, the Two Mile and Ryans Reef. Floating pillies rigged on gang hooks or trolling spoons has been the way to catch a feed. There has also been a few big grunter and a few snapper about these areas also. Fresh baits such as yakkas, pike or even large prawns have been working well.

There is still plenty of fish being caught in the Burnett system. Most of the sand bars are producing plenty of summer whiting, sickle fish and some cracker flathead. Fishing the last of the run-out tide with yabbies or beach worms has been working a treat. There are still a few blue salmon and grunter in the Town Reach and still plenty of bream along the rock walls. The area around Strathdees has been producing a few whiting and a few three tooth jew. Top of the tide seems best and peeled prawns seem to be one of the more popular baits.

There is still good numbers of whiting and dart along the beaches and back into the mouth of the Elliott. Some cracker flathead have been caught off the sand bars further upstream. Shark’s Nest has seen a few cod, jack and an odd barra pulled from this area.

There has been a few tailor about both the Baffle and Kolan mouths, and trolling small diving lures such as the Tilson Barra in the Herring colour has been doing the trick. There are still good numbers of whiting and flathead on the flats. With some of the warmer weather we have had a few mangrove jacks caught. Live baiting with poddy mullet or herring has been the way to go, and as the warmer weather continues, the jacks will only get hungrier and become more common to catch.

There has been plenty of top water bite out on the lake, with some quality bass to 40cm being caught. Surface lures such as the Bassday Sugar Pens have been working well. There is still plenty of smaller bass schooled up in the middle of the lake, so jigging small soft plastics or small metal blades have been working best on the schooled bass.

Recent warm weather has the barra on the chew in Monduran with plenty of 70cm to 80cm fish being caught. Early morning or late afternoon have been the better bite times. Smaller 4 inch to 5 inch lures are working best. A few stand-outs have been the Samaki Vibes and Snap Dog hard body timber lures.