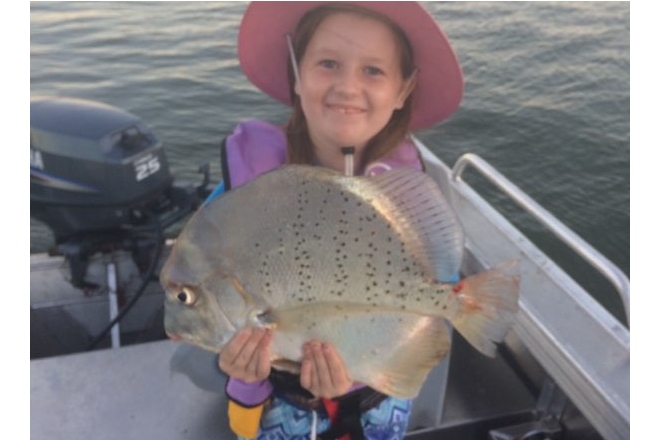 Dayzi Jones with the big sickle fish she caught while fishing the Burnett River with her dad.

Looking forward into the Australia Day long weekend, the offshore forecast for the Bundaberg area isn’t looking too good, but the general forecast for a bit of camping and fishing in the Bundaberg rivers and creeks is still looking fair.

As for the fishing this past week, if you were lucky enough to brave the weather and get offshore last weekend, there were some great catches of reef fish and Spanish mackerel.  In the mix there was some big red emperor, coral trout, some monster grass sweetlip along with some quality parrot.

There were decent numbers of Spanish mackerel caught by trolling lures or big swimming dead baits.  The crew aboard Catfish Charters had one of the best catches of mackerel seen in a while, as well as a great bag of mixed reefies for their clients.

There has been good numbers of school mackerel, tuna, trevally and queenfish around the river mouths, mainly on the tops of the tides.  Most of the rivers and creeks have got plenty of salt back in them and this has certainly improved the fishing.

There have been plenty of mangrove jack on the chew in the Bundaberg rivers, with a lot being caught by live-baiting the deeper holes, but a few have been caught on lures.

There is still plenty of big grunter and bream about.  Most of the bream have been caught around the rocks and the grunter are out in the deeper channels.

All the sand flats in all systems have fired up for some big sand whiting, flathead and some large sickle fish, with the last of the run-out and start of the run-in tides being best.  Yabbies and peeled prawns have been the favoured baits.

Most Bundaberg rivers have a run of mud crabs and prawns getting about.  The crabs have been of constant quality and well worth the effort.  The prawns are small river prawns but are super tasty and easy to catch.

Lake Gregory is producing some great bass fishing with early morning surface lure sessions being best.  Bass to 45cm have been caught fishing the weed edges and up in the timbered areas, using this method.

Lake Monduran fished well this week with some constant catches of barra up to 85cm.  Most of the barra have been caught up in both the North and South arm of section “B”, and most of them have been caught on smaller lures and soft plastics with the Z-man 4 inch Swimmerz being a favoured plastic for the barra.