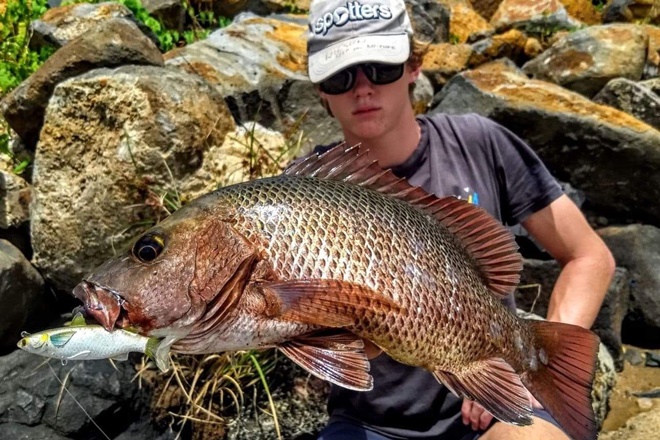 Corey Hanks with the mangrove jack he caught in the Kolan River recently.

The Burnett has been fishing awesome with plenty of cracker grunter and flathead being caught! The standout way to target them has been throwing 10g and 20g Samaki soft vibes over gravel beds and shallow sand bars. There has also been plenty of good sized mangrove jacks caught on the shallow rock bars at low tide. Flicking small prawn soft plastics and 3” Zman Minnowz has been the standout techniques. There’s also been talk of some good numbers of crabs and prawns getting around.  Remember prawning at the bottom of the tide is the prime time.

The Baffle has been fishing really well for your bream and whiting! With the high tide at midday this weekend it’ll give you a chance to pump fresh yabbies early in the morning. Most whiting are being caught up around the Winfield area so that would be a great place to start.  Throwing small poppers for them over very shallow sand bars has also proven to be an extremely effective technique, resulting in a fun way to get a feed. Some stonker bream have been caught all through the system. A great place to start fishing for them is in rocky areas, using as small as possible weight on your soft plastic or bait is really important.  Also, don’t forget to throw the crab pots in; the Baffle has been crabbing unreal the past few months.

The Kolan has been the standout river for your barra and jacks over the past couple of weeks!  There has been reports of barra being landed near the magic metre mark. Most of these fish have been caught on 20g soft vibes, prawning imitation plastics and big live baits. Fishing the last hour of the incoming and the first hour of the outgoing tide has been the hot bite time. Most of the Jack have been falling for Jackal Squirrels and Lucky Craft hard-bodies slowly twitched off rock bars and heavy mangrove structure. Don’t forget to take a lighter rod because there’s also been some cracker grunter and flathead being caught there as well!

The Elliott has been fishing unreal for your whiting and jacks! Again, fresh yabbies is your killer bait!  Don’t forget to take a few beach worms to mix up your baits. The jacks seem to be all fired up in the upper reaches.  Small paddle tail plastics and small prawn plastics has been the only way to chase them! With the low tide early in the morning it’s always fun to throw 10g Samaki vibes over the shallow sand bars for flatty’s. It’s a great way to fill in time while waiting for the tide to come in to get up the back of the river. Don’t forget to throw some crab pots in because there’s been some cracking sized crabs caught up there in the past couple of months.

Lake Monduran had some cracking days later last week! Some lucky anglers boated up to 20 barra for the morning session! With the southerly winds forecast for this weekend you really are going to have to make the most out of the bite times. Early morning and late afternoons are of course your best, but also keep in mind the midday tide change. Monduran isn’t tidal, but with the wind changes the tides can make all the difference. Your Jackal Squirrels and Lucky Craft Pointers have been the standout lures but don’t forget to try jigging a vibe off the bottom if the fish are straight underneath the boat or in shut down mode.