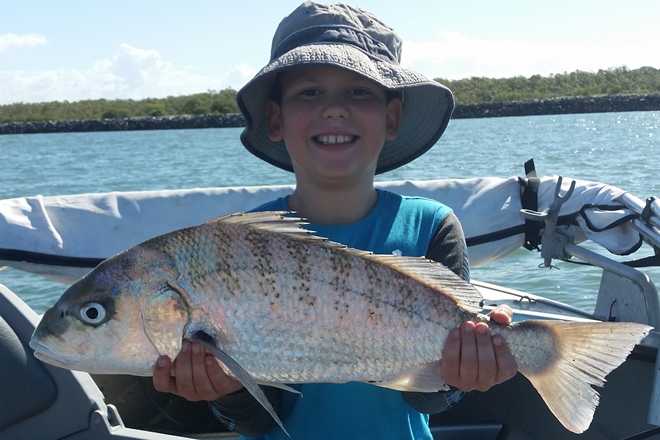 Bundaberg rivers and offshore on fire

Now we are in the last week of winter, the days should start to warm up and more of the summer species like mangrove jack and barramundi should start to fire up over the coming months.

The weather man is predicting a fine weekend coming up, so it’s looking like a great chance to get out on the water and enjoy what Bundaberg’s waterways have to offer. Last Saturday, the Burnett Heads boat ramp was packed and by all reports, most boats brought home a good feed, including cobia, maori cod, red emperor, grass sweetlip, hussar and parrot.

Quite a few sailfish and small black marlin have showed up and were also caught last weekend.  Most were caught by accident by floating down livies that were intended for larger reef species. Hopefully this continues and draws more game fishermen to our magic part if the world.

The rivers and creeks around the Bundaberg area are both fishing well.  The Burnett is still alive with estuary cod and flathead, with most of the action coming on soft plastics fished along most of the rock walls and any other structure in the river.

The Elliott River has also see its fair share of flathead recently.  The odd barramundi and mangrove jack are just starting to show up in better numbers and will only improve as the water temperature increases.

On the freshwater scene, Lake Gregory is nearly back to normal water height and the bass are looking healthier than ever.  Whilst there are bigger numbers of bass schooled up out in the middle, the larger bass over 50cm have been caught on running soft plastics and spinner baits around the weed edges.  It’s well worth getting out to the lake as the sun is coming up to get a surface bite.  Casting poppers around the edges can be one of the most exciting ways to fish this magic little impoundment.