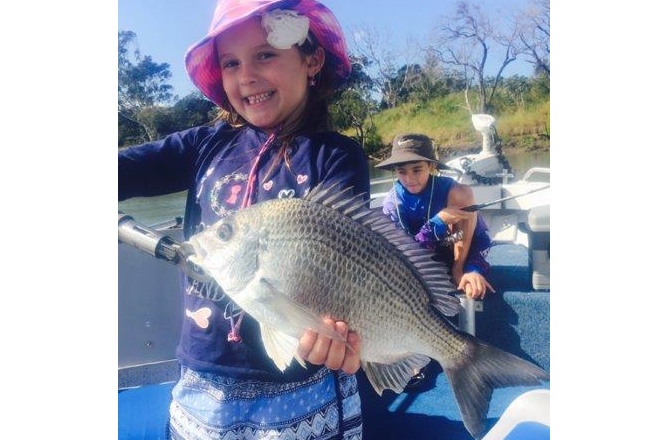 Amira and Taishi with the bream they caught on a day out in the Burnett River recently.

Bundaberg rivers and offshore worth a look this weekend

Well, it’s about time – the forecast for the Bundaberg area for this weekend is fantastic with light winds predicted all weekend.  Quite a few boats took advantage of the good conditions last week and, despite a lot of run in the tide with the full moon, that night most boats managed to land a quality mixed bag of reef fish.

Once again, with the light winds, even the smaller boats should be able to explore the inshore reefs off Bundaberg.  Just keep in mind if you’re intending to head out, that your flares are in date and if you do go out more than two nautical miles, you need to have a registered EPIRB on your vessel.  Good numbers of mac tuna are providing plenty of action on light gear.  The inshore reefs such as the Two Mile, Four Mile, Ryans and the Cochrane Artificial Reef will all be worth a look with some nice grunter, snapper and school mackerel all being caught this past week.

As the days are getting cooler and the water temperature is falling, species such as bream, tailor, big flathead and blue salmon all start to show up, turning the Burnett River into an awesome winter fishery.  Some nice bream have been caught on both bait and soft plastics along the many rock walls in this system.  Flathead and estuary cod have been a common bycatch whilst chasing bream, with the 65mm Squidgie Pro Range Prawn accounting for good numbers of these fish.  Word has it that there are a few winter whiting starting to school up at the leads in the Burnett with squid, prawns, beach worms and Berkley Gulp in the Sand Worm colour all working on these tasty winter whiting.

With the magic weather this weekend, both the Baffle and the Kolan will be well worth a look.  The mouth of the Baffle has been fishing well for big grunter, queenfish, flathead and chopper tailor.  Further upstream there has been plenty of summer whiting and flathead around the sand bars and still the odd mangrove jack being caught around the rock bars and walls.  With the bigger tides this weekend a few muddies should also get flushed out, so putting a few pots in will be worth a go.

The past week at Lake Monduran has been very productive with some fishermen landing up to ten barra in a session.  Even though the water temperature has dropped, keen anglers have been landing plenty of barramundi, either on soft vibes or on suspending hard body lures.  Experienced anglers have been targeting shallow sun-warmed bays with wind and current flow pushing into them to locate the schools of barra.  Most of the barra caught his week have been between 60cm and 80 cm, so let’s hope we don’t receive any more big rain and these fish can grow out to over the magic metre in this fantastic impoundment.