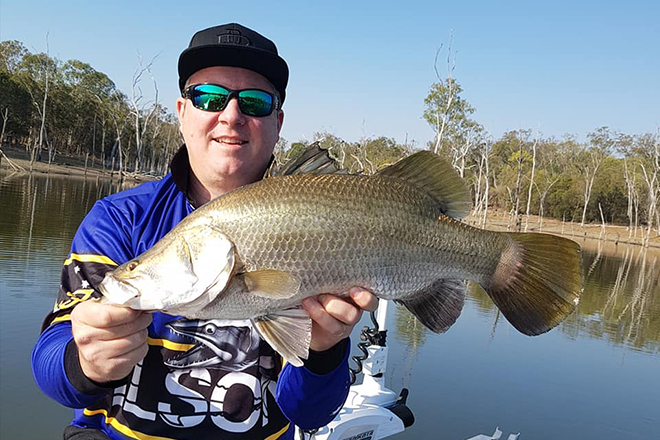 20190915 Tim Mulhall Monduran.jpg - Tim Mulhall with the nice barramundi he caught while fishing at Lake Monduran during the full moon last weekend.

The local Bundaberg forecast is looking pretty good for the weekend at this stage, but it always pays to keep an eye on the up-to-date forecast as things can change very quickly.

If the weather is anything like last weekend, the offshore anglers should enjoy some fantastic fishing. The Gutters produced some quality grass sweetlip, cod, parrot and also some nice snapper. The outer islands also produced some monster coral trout, red emperor, red throat, cobia and plenty of big hussar.

All the inshore areas such as the Cochrane Artificial Reef, Ryan’s Patch and the Two Mile Reef have been fishing well, with plenty of snapper, grunter, school mackerel and the odd Spanish mackerel being caught. Floating lightly-weighted pilchards back to the bottom has been deadly on the snapper and mackerel. Also, Samaki or Jackall vibes have also been extremely effective on all species inhabiting the inshore reefs.

Considering the pressure the good old Burnett gets, it still continues to produce the goods. I’m predicting that there will be plenty of flathead, bream, estuary cod and whiting throughout this fantastic river system for the start of the school holidays this weekend. As the water temperatures slowly increase, so will the chance to start hooking into a few mangrove jack and barramundi with a few already starting to show up. With the full moon last weekend, some cracking summer whiting were caught around the shallow sand bars near Strathdees and Splitters Creek, with the best fishing on the first hour of the run-in tide.

Mangrove jack are well and truly on the move in both the Kolan and the Baffle systems. Jack to 50cm have been responding well to soft plastics, prawn imitation lures and soft vibes fished close to the many rock bars and snags that both of these systems are famous for. Other species such as flathead, grunter, whiting and blue salmon have been keeping anglers busy and this weekend should be no exception.

How good is it that Lake Monduran is fishing so well? Over the full moon last weekend the dam was a hive of activity. It was awesome to see so many anglers getting stuck into so many barramundi. The size of the barra ranges between 50cm to 90cm. It was fantastic to see quite a few barra caught on soft plastics such as the Keitech 4.5” Swing Impact and the Zerek Flat Shadz slow-rolled over the shallow flats. The Jackall Squirrel is still hard to go past for casting and twitching through the snags.