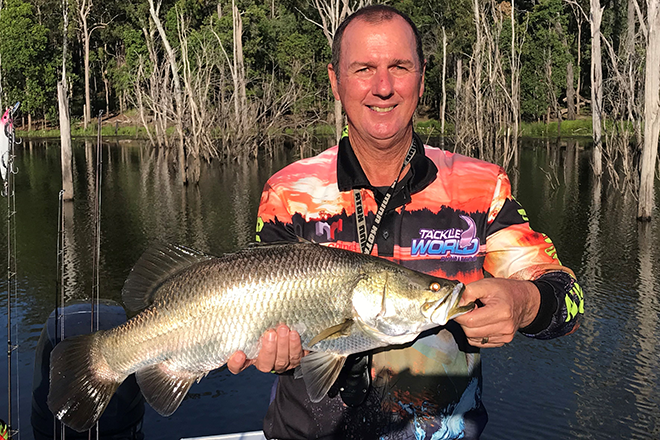 Keith Whalley with the beautiful barra he caught at Lake Monduran recently.

Bundy impoundments the go after rain

As I’m sure you can all understand, writing the fish report for this week was a little difficult due to the low pressure system that moved down the south-eastern Queensland coastline during the past few days.

BUNDABERG OFFSHORE AND INSHORE REEFS
Even though the weather system has moved offshore by now, any offshore fishing will still be limited. Your best bet to wet a line around the Bundaberg area this weekend will be back to the local rivers and impoundments.

BAFFLE CREEK AND THE KOLAN RIVER
Both of these systems have cleaned up slightly, with the best fishing coming around the mouths. A few really nice flathead, grunter and whiting have made up most of the catches this past week. Some nice muddies have also been caught, so let’s hope this continues in the lead up to Easter.

BURNETT RIVER
Once again, most of the action has been around Burnett Heads chasing the cleaner water. Good numbers of estuary cod, bream and the odd mangrove jack have been caught around the many rock walls towards the mouth. Strathdees and the old Ferry Crossing have been a little slow but with a little effort and fresh baits, anglers have been rewarded with some nice flathead, salmon and whiting.

THE ELLIOTT RIVER
The Elliott is still the cleanest system and would be my pick for this weekend, with plenty of whiting and flathead around the shallow sand flats and some nice bream, mangrove jack and the odd barramundi from Shark’s Nest to Fallon’s Rocks.

LAKE WURUMA AND CANIA DAM
These two Bundy impoundments inland of the city are both fishing well. Wuruma is an awesome small impoundment where you can camp right on the water. Big numbers of red claw are still being caught with rockmelon, dog biscuits and tins of cat food all performing well. The bass fishing at Cania has been fantastic. The bass have been caught on a heap of different techniques. An easy way to locate feeding schools of bass has been by trolling hard-body lures that dive own to around three metres, then cast small blades, tailspinners and soft plastics to get the bite.

LAKE MONDURAN
The Lake Monduran Holiday Park and Lake Monduran Sponsor a Barra social weekend will be held on the middle weekend of the school holidays. This event will kick off around 6pm on Friday, 6th April with a fishing talk, and a few sausages and a tag-along tour on Saturday morning. If you’re interested, there is more information on the Lake Monduran Sponsor a Barra Facebook page at https://www.facebook.com/events/587796484888502/ or you can call the Lake Monduran Holiday Park on (07) 4157 3881. I managed to do a run up to the dam last weekend and did see some nice barra caught, with the stand-out lure for the day being the Zerek Live Mullett 4.5”.

Once again, we’ve got a bit of a dodgy forecast for this weekend, and if all else fails it might be a good chance to get a boat of boat trailer maintenance done to be ready for Easter.