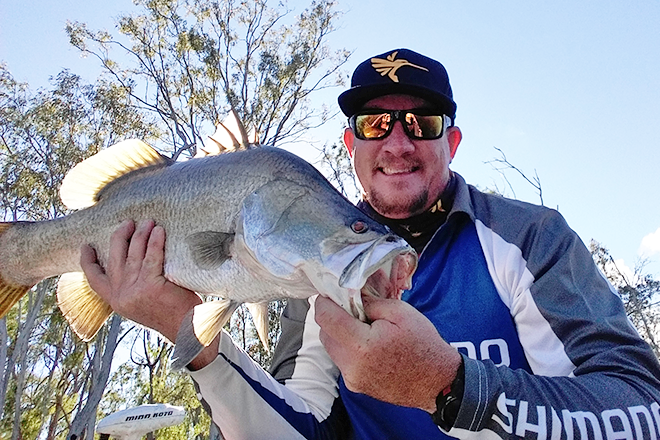 Dale Smith with the 72cm barra he caught in Lake Monduran earlier this week.

How good was it to receive some well-needed rainfall throughout the Bundaberg district last week? Both the rivers and the reefs tend to fish better after a small flow, so over the next few weeks the fishing and crabbing around Bundaberg should be better than ever.

BUNDABERG OFFSHORE
With light to moderate east-north-easterlies forecast for this weekend there should be a chance for our offshore anglers to get out and have a crack, but as always, check the local forecast prior to heading out. Most of the popular marks north of Bundaberg, such as the Five Degree and Western Warregoes have been fishing well with some nice red emperor, coral trout, grass sweetlip, parrot and Spanish mackerel being caught recently.

THE BURNETT RIVER
Due to the amount of rain that fell in the Burnett catchment, all of our local rivers, creeks and inshore reefs will need a little time to clean up. With the full moon next Thursday night and the bigger tidal movements, all the local rivers should be fishing a lot better by next weekend. A big positive with the dirty water is that the mud crabs should really fire up, so if you’re planning a fishing trip, throw in some pots and see how you go.

LAKE MONDURAN
I did a quick run up to Lake Monduran last Monday, and I can report that the water has come up around 35cm. The water was still clean enough to fish and the barramundi were on the bite! I landed two barra around the 70cm mark for the morning, both on Jackall Squirrels fished close to snags.

The Win Television Lake Monduran Family Fishing Classic is being held this weekend – 20th and 21st October – and with this year being the 20th year it’s sure to be an awesome weekend. There are heaps of lucky draws as well as the major lucky draw prize of a boat, motor and trailer package. There’s also daily catch prizes on offer both days.

Most of the Tackle World Bundaberg team will be there, and I’m sure there will be plenty of barra caught.