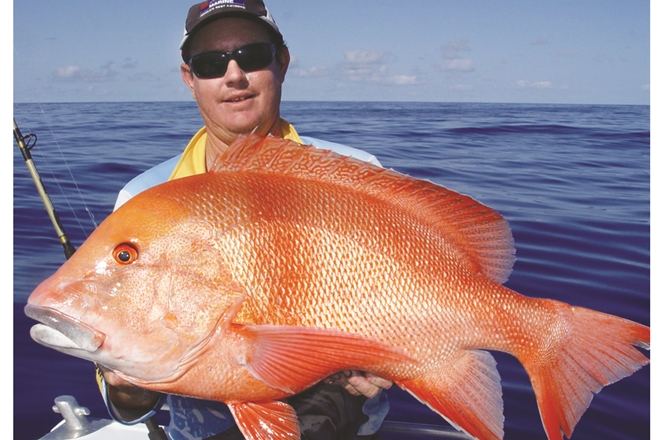 Brett Seng was rewarded with this red after using a large squid head and waiting for the red to find the bait after hussar smashed the bait to pieces prior.

THE thought of driving six-plus hours to your fishing destination for a weekend trip can put you off at times, but when there’s 15 to 20-knot northerly wind predicted at night, there’s no better place to go than the Bunker Group reefs because you can tuck in behind the reefs to rest easy after a big day’s fishing.

With this in mind on a recent trip and the plan to fish the northern Bunker Group region, we decided to leave from Boyne Island/Tannum Sands. This location is a six to seven-hour drive north of Brisbane, a great alternative to 1770 and the same distance as Turkey Beach. It’s less distance by water if you’re fishing the northern end of the Bunker Groups reefs and the ramp has a huge carpark, pontoon, 24-hour service station close by and a decent-sized town that has everything you could want.

The channel out of the river can be pretty shallow in spots but it’s well marked with beacons, making navigation pretty easy. We headed out in fantastic conditions and aimed for the area past Innamincka Shoals, which is about a 65 nautical mile (120km) run. As we headed up the inside of the outer reefs, I ran over a really good show of fish at 25 knots on the Furuno FCV295.

I was pretty excited with what I was seeing on the sounder and quickly positioned the boat for our first drift. All the crew dropped baits while I sent down a Zerek Flat Shad plastic on a custom-made 2oz jig head. As soon as my plastic touched bottom it was inhaled and I quickly sunk the hook into a really solid fish.

The Wilson Venom 15-50lb spin rod was loaded up beautifully and seeing line peel from the reel on your first drop is a great way to start the trip. That feeling got even better when a beautiful red emperor hit the surface. Though I’ve caught lots of reds over the years, catching them with alternative methods like plastics is highly rewarding. This trip I had my dad Terry, mate Brett Seng and his son Brady come along and Brady was super keen to catch a red because he had never caught a legal one before.

After several hussar and maori cod Brady finally nailed his first legal red, which was not only satisfying for him but also me. It’s awesome when you see a red virgin pop their cherry with a smile from ear to ear. Brett soon followed with a red and cracking coral trout while Brady and I got into nice trout using plastics and Zerek Fish Trap vibes.

With the fishing slowing, we continued our way up past Innamincka Shoals in the Bunker Group Reefs where I would begin searching for new ground. After about three hours of searching I wasn’t finding small isolated rocks like I had hoped to, so I started making my way south, checking on older spots I had found in the past. One large 10m-high rock had a lot of fish life on it and it wasn’t long before rods were buckled over on a range of quality fish.

Dad and Brett were using pilchards, mullet and hussar fillets, while Brady and I continued to use plastics and Fish Traps, which were getting smashed every drop by coral trout, coral cod, coronation trout, tomato cod, hussar and maori cod. Brady had one fish take him back into the reef and bust him off, but three drifts later I nailed a nice trout and to my surprise it had the plastic and metre of leader Brady had lost 20 minutes earlier hanging out of its gob. That was cool to see.

Brett managed a nice goldband jobfish, which was a first for him, and not long after he was doing battle with another quality fish that was going hard with big jerking head shakes and pulling plenty of line. As it came up from the clear blue depths, we called it for all sorts of species but it surprised us all when a beautiful long-nosed emperor hit the surface. This was another first for Brett.

The long-nosed have a big powerful tail and a long pointy head and are more commonly caught in north Queensland waters, though we have caught the odd nice one off Fraser Island and the Breaksea Spit region over the years.

After more quality trout were caught, the bite slowed and with the northerly breeze kicking in we decided to make the run to Broomfield Reef to get out of the wind for a good night’s sleep. We managed redthroat emperor and squid in the shallows that night but got busted off by plenty of unstoppable fish that kept us on our toes.

The next morning we were blessed with glassed-out conditions and went wide to an area where I’ve caught reds in the past. The type of red ground I look for at the Bunker Group region is the same as what I look for anywhere I chase reds – small isolated rocks/reefs. I find the reds tend to move around a lot more on the Bunker Group, so a rock that could hold reds one day may not the next.

I sounded various spots and noticed none were holding many quality fish, but I was seeing the odd individual fish spread out all around the rocks, so knew we would have to be patient and drift baits around the vicinity of the rocks to get results. We began drifting over rocks and Brett managed a coronation trout and school-sized red straight up. Dad followed with a cracking coral trout and big pearl perch to start the morning while I continued to use a Zerek Fish Trap vibe and nailed maori cod after maori cod, along with another nice coral cod, but overall the fishing was slow.

We persisted on a couple of spots that looked promising but the hussar were smashing baits quickly, so this is where you really need to use large flesh baits or big squid to allow the reds time to find the bait. Brett got baited one drop, so dropped down one of my rods that had a large squid head on it. Once again the hussar were smashing the bait and just when you’d think there couldn’t be any bait left, Brett sunk the hooks into a cracking fish and the Venom rod loaded right up.

The fish gave him plenty of grief and after lots of powerful runs a beautiful black-lipped red hit the surface and was safely netted. Next drift we put another big squid on my rod and gave it to Brady to drop down. I explained to Brady the importance of not striking at the smaller fish biting at the bait and waiting until you feel several heavy tugs before striking and sinking the hooks.

It wasn’t long before he did exactly that and the Venom rod was once again buckled over and the concentration took over as he battled a nice fish.

Looking over the side, I could see a nice red coming to the surface and it was a good upgrade to his first-ever one he caught the day before. Brady did a good job of allowing the red to eat the bait for a while before sinking the hooks because all three ganged hooks were in its stomach. After plenty of smiles and pics, I decided to chase pearl perch on the 100m line because we were happy with the catch of reds, trout and other species we had on board.

After a bit of sounding around I located some fish and had a few drifts, which resulted in beautiful 3-4kg pearl perch coming over the side, with Brady getting a new PB. Happy with the results, I went looking for new ground for a couple of hours both in the deep and shallow waters when I came across one very small rock that had a few fish on it.

This resulted in a couple more reds, trevally and tomato cod before we decided to start making our way in, fishing various spots along the way. Unfortunately, the trip home in the car wasn’t so good when we broke a trailer spring on the highway not long after leaving Tannum Sands.

I put a post on Facebook asking if anyone in the area could help with a new spring and the response completely blew me away. I received over 100 messages and calls offering help in all different ways. A mate Shane Wolff called to tell me of a place in Gladstone that was open on that day (public holiday) and would have the spring I needed.

I also had Gordon Triplett from Garmin get me in contact with Darren from Curtis Coast Marine who was going to open the shop for us to fix the problem if needed. It’s great to see the fishing community come together and help a fellow fisho in need and I can’t thank everyone enough for the support that was offered. After it took four hours to fix the broken spring we were back on the road but an hour later blew a tyre just to add to the drama for the day.

They say bad things come in threes and five minutes from home I hit a wallaby, which did a bit of damage but at least we got home safely after nearly a 13-hour journey.

Until next time, tight lines and get out and enjoy the Bunker Group reefs.