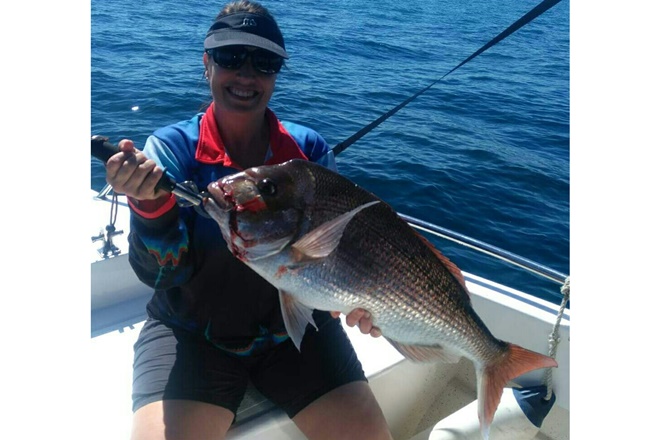 Trina Chantler with the nice snapper she caught on the inshore reefs on Father’s Day.

Well firstly, we hope all the Dads out there had a fantastic Father’s Day.  Luckily enough the weather around the Bundaberg area really turned it on last Sunday, and it was great to see so many people out on the water making the most of the calm conditions.  The boats that ventured out offshore all reported landing a quality mixed bag of both pelagic and reef fish, including coral trout, red emperor, grass sweetlip, tusk fish, Spanish mackerel and cobia which all made their way into ice boxes last weekend.

Once again, a lot of slightly smaller trailer boats made the most of the calm conditions and fished the many inshore reefs close to Bundaberg.  School mackerel are still hanging around in big numbers as well as some really nice grunter and snapper caught in similar areas.  Fresh baits such as large prawns, mullet fillet or live yakkas have all been working well.

Now we are into the first week of Spring and the days are starting to warm up, it’s nice to see a few mangrove jack starting to fire up around the many rock walls in the Burnett River.  The Town Reach has been fishing well this past week for blue salmon, barra, grunter, bream and the odd school mackerel.  With the new moon next Monday night and the bigger tides this weekend, I’m predicting some nice summer whiting and flathead should fire up around the many sand bars in the Burnett.

A few tailor, whiting and dart have been caught around Elliott Heads, whereas further up the river,  some monster flathead have been smashing both soft plastics and well-presented baits.  It’s great to see even a few barra and mangrove jacks being caught more regularly upstream at Sharks’ Nest.  The winter whiting are still around in good numbers between Woodgate and Hervey Bay.  Baits such as squid, prawns and fresh yabbies is all you need to get out and catch a good feed of whiting, but remember – there is a bag limit of 50 (fifty) winter whiting per person in possession.

There has been a few queenfish and tailor at the mouths of both the Baffle and Kolan.  Some top quality grunter have also been keeping both locals and holiday-makers entertained.  There is still good numbers of whiting and flathead on the flats and as I mentioned earlier, as the water temperatures start to rise, so will the mood of mangrove jacks and barra, resulting in these becoming a much more common catch.

This is always a magic time of the year to fish this awesome little impoundment.  The water levels are back to normal and the bass are being caught on many different techniques, from top water lures around the weed edges to soft plastics, tail spinners and blades cast to schooled-up bass in the deeper parts of the impoundment.

With the first signs of the northerly winds and the slightly warmer days the barra are starting to become more active right throughout the lake.  Some of the hot techniques that have been working include jigging soft vibes such as the Berkley Shimma Shad in around 12-15 feet of water when you can see the barra coming through on your sounder.  Casting suspending hard body lures into the back of bays where the water temperatures are slightly warmer has also definitely been worth a crack.