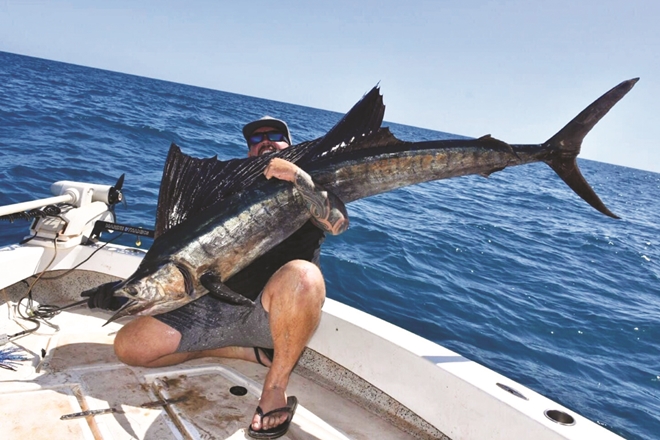 The author with his first sailfish.

SEPTEMBER is a great time of year to target western Cape York sailfish.

As well, we get a few more decent weather windows, the temperature is warming and so is the fishing. The Hay, Mission and Embley rivers are also holding good numbers of barramundi and blue salmon.

These fish are hanging around bait drains and adjacent dirty water lines, but watch your sounder because good-sized schools of blue salmon are common and seem to pop up almost anywhere there is bait and dirty water. Good numbers of mangrove jack are being caught in and around the creeks across from Evans Landing and the Pine River.

Plenty of fingermark have been caught on small bommies off Mapoon and the grounds just south of Weipa. Heaps of spanish mackerel have been taken wide of Boyd Bay.

The talk of the town among fishos during September is often the good numbers of Cape York sailfish being hooked around the billfish grounds. Reports of double-figure scores are common, and I’ve heard stories of pandemonium involving double and even triple hook-ups. I recently embarked on a trip with Tim Appleton from Infish Lures to target these speedsters.

Tim and I had little experience chasing sailfish but both knew working these fish out would be an exciting learning experience. We left from Evans Landing around 6am and headed towards the billfish grounds. We stopped along the way and dropped on a few marks, which resulted in fingermark and some other bottom dwellers, but after a few drifts we agreed we should keep moving because chasing sails was what we had really come to do.

We soon found bait and it didn’t take long for our first sail to show itself. The skirt at the back of the spread was engulfed by a small sail, but after a short run it was gone. When trolling for any pelagic species, it’s a good idea to mark any interactions you have with fish on your plotter.

This will help you develop a troll pattern as the day goes on. We trolled for another 45 minutes before we saw the bill of a decent size sailfish pop up behind the teaser. After it turned its attention towards the closest skirt, we noticed it was accompanied by another sailfish.

It wasn’t long before one of our rods was buckled over and line was peeling off the reel. I took the rod and Tim proceeded to clear the deck. The fish put on a great acrobatic show, with several jumps and blistering runs, but before long the fish had tired and was boatside.

After a few quick photos, the fish was released. During the fight Tim noticed the fish I had hooked was accompanied by two other sails and he managed to hook one on a stickbait, only for it to pull the hooks. On his second attempt, Tim worked his stickbait across the face of the other sail.

Next thing we knew his rod was buckled over and it seemed like he was hooked up solid to our first sailfish on a stickbait. However, Tim soon realised his stickbait had in fact been snatched from the mouth of the sail by a pesky mack tuna. Soon the spread was back in the water and we found good showings of bait.

Once again a bill popped up behind the middle skirt. On further inspection, we noticed four sailfish among the spread. After a few tense moments, line began pouring off one of the reels and this time Tim grabbed the rod. This fish was a little smaller but much more acrobatic and during its first run it jumped five or six times.

When Tim brought the fish a little closer to the boat, I saw it was accompanied by another sail, so pitched a stickbait at it and it was eaten, yet a solid hook-up couldn’t be made. After a few more jumps, Tim’s fish was brought boatside and the hooks were removed. Happy snaps were taken and the sailfish released safely.

Now we had hooked and missed two Cape York sailfish on stickbaits, the bar was set and the goal to land a sailfish on a stickbait was made. The teasers and skirts were again deployed and we trolled for another two hours without seeing any action, as it seemed the fish had gone off the chew with the drop in wind.

Before heading home we managed to raise one more fish, but it showed no interest in our offering. Unfortunately, on this trip we did not land a sailfish by casting stickbaits, but we weren’t bothered because we learnt so much. We noticed the sails had no hesitation eating the stickbaits, but the problem was our hook set.

Next time, we could try lighter-gauge hooks because they would be better to puncture their hard mouths, or running assists to obtain a hook-up deeper inside the mouth where the flesh may be softer. This challenge has given us even more reason to get out there and try again.

I hope to see you on the Cape.