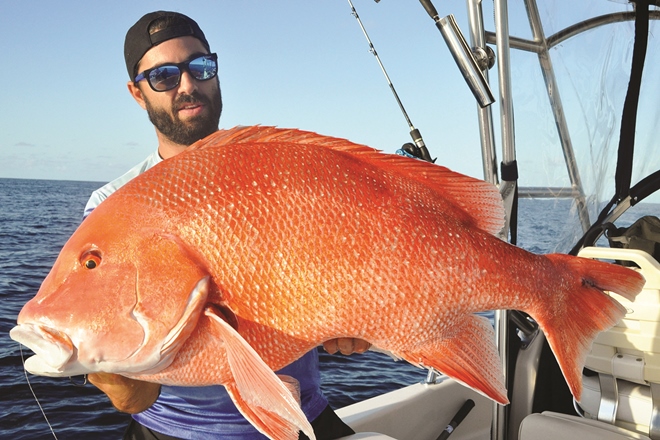 CHASING red fish, also known as red emperor, can be the most frustrating and dollar-wasting experience, but like anything, when you persevere through the hard work and large fuel bills running zig-zags up the Queensland coast, it all pays off.

The questions I have been asked quite often lately include: What should I look out for on the sounder? What depths should I be looking in? What baits and tackle should I use?

When targeting these red fish, most people search the 55-70m contour lines looking for rocks to drop large baits onto. This tactic can be effective when chasing schooling reds (6-8kg), but less successful and extremely frustrating when it comes to the bigger models (13kg-plus). Most of our larger fish have come off areas with very little showing on the sounder, if anything at all. We used to fish directly on top of rocks and then once the boat drifted off the rocks, we would line the boat back up for the next drift. What we have found on the past couple of trips (due to pure laziness) is once the boat has drifted away from the rocks, even up to 50m away, we have started getting serious fish.

On our last trip out, we noticed this happened on a few spots and it has completely changed our way of fishing. Where we used to see large shows on the sounder, we are now seeing no shows and hooking up to larger fish. The four biggest red fish to grace the deck of our boat have been 16.8kg, 16.2kg, 15.8kg and 15.5kg. All four came from areas with no shows on the sounder and all were grazing in the rubble, away from the action on the rocks. This does not mean you don’t need a good sounder, in fact you need an excellent sounder that suits your purposes. We find the Furuno gear almost unbeatable. We are currently running an FCV587 unit to a P66 transducer, which reads ground clearly at 35 knots.

This setup plays a major role in our fishing and has made locating isolated rocks easier. Many people have the mentality of ‘if it isn’t broke, don’t fix it’, but the technology these days is unreal and you would be silly not to move with the times if doing so makes your hobby/passion easier and more enjoyable. We will be upgrading our Furuno gear again in the near future, which will be another game-changer.

My five steps for chasing red fish are:
1. Search the 55-70m depth for isolated rocks no larger than 3-4m high.
2. Set your drift up correctly.
3. Drop different baits over the rock (preferably large baits such as hussar fillets, mullet fillets and large squid).
4. Be patient and persist through the hussar schools. Most isolated rocks will hold schools of hussar. Another indication you are fishing the right area is catching cod species, particularly maori cod.
5. And last but not least, fish past the rock.

A benefit of fishing past the rocks is you can have your drag a bit looser, knowing the chances of getting bricked are slim.

Our largest red emperor was landed by Peter and was caught on 30lb gear in 60m of water. Another positive is being away from all the action gives you a greater chance of landing the fish without it being taken by the taxman. Unfortunately, one of the toughest things about red emperor fishing is knowing when to move on from the spot. In our early days of fishing for reds, we would find the fish and catch what we wanted to keep for a feed and release the rest until they went off the bite.

The problem with this method is plucking five fish out of a spot could actually mean removing 15 fish, as the number of times you get taxed when fishing for reds is ridiculous. And each time it happens, it means one less fish on the spot. The idea of fishing untouched rocks is for them to last a lifetime. We have learnt to pluck one or two fish from a spot and then move on, knowing when we come back the next time, the fish will be there.

Some days the sharks are worse than others, and if they are lurking on the rock you will never win. What good is the head of a red? It’s best you move on.

When fishing for red fish, our go-to setups are Wilson Live Fibre Venom PE3-8 rods paired with Shimano Torsa 16 reels. Unfortunately, the Torsa is a discontinued model, but the Talica 16 is just as good. We spool our reels with 80lb Daiwa J-Braid and 80lb leader. Our go-to rig is an ELKAT gang, which almost guarantees that perfect hook-up every time. Although this all may sound fairly easy, the time involved in doing the miles can really take it out of you. However I can assure you it all pays off with plenty of smiles all round!