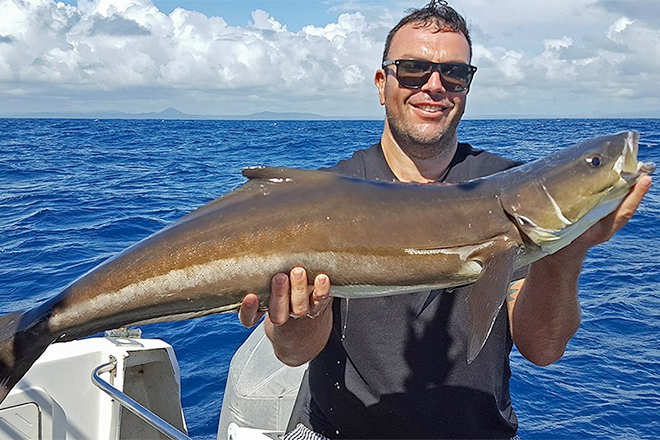 With that typical late summer weather pattern continuing with the strong winds and squally showers most anglers keep their efforts around the closer reefs. Sunshine reef and Halls reef have produced some bigger Spanish and good sized spotted mackerel with dead baits like garfish, large pilchards and Yakka’s fished on a gang hook rig getting good results, try using a Neptune Tinsel head to get the attention of a passing pelagic.

Off the bottom on Sunshine the trout have really been on the chew, resident offshore expert Chicko love fishing for these great table fish and is a master at catching them, for him live bait is best with the size 10 ball sinker right the way down to the hook the best rig. Good sized cobia have been caught on North Reef along with snapper, sweetlip, pearl perch, mori cod and tusk fish. Fishing soft plastics like the Zman or Gulp 7 inch jerk shads in either the pink or Motor Oil colours has been a great way to come into contact with these fish. Those that have made the trip up to Double Island Reefs have been rewarded with some great reef species including amberjack, snapper, sweetlip, cod and pearl perch cobia and jew. Tuna have been in good numbers and seem to be traveling in good sized schools, as usual for this time of the year they tend to feed to the north so if you can position your boat north of the schools and cast to them as they come closer you should see a result.

The Noosa River has again produced a great mixed bag of fish including flathead, bream, whiting and trevally, with plenty of fish taken in the lower parts of the system. Whole fish baits like whitebait, hardy heads, and pillies floated along drop offs and edges has working well on the run out tides when chasing flathead, plastics fished low in the water column has also seen some great results. With the wind up a fair bit last weekend some of the better option were back of the sound and around the bridges. There have been reports of bigger whiting being caught around Weyba creek and the lower river mouth areas. Live worm and yabbies have produced some real elbow slappers. Surface lures are working well on the odd queenfish as they make their way into the river chasing bait fish on the tide.

Areas like the sand bags, Woods Bay and the river mouth have produced some good fish, trevally have also been in on the action with big giant and golden trevally on offer. Night hours and low light periods have seen some good mangrove jack being caught. Paddle tail plastics and prawn imitation soft plastics like the new Chasebait Flick prawns have been accounting for some good fish when fished around heavy structure like pontoon and bridges. Crabs are up and walking with all the fresh in the system, large bucks have been taken in the deeper holes and lower parts of the river, the crabs are very full and lovely and sweet, mullet continues to be the prime bait.

With the wind up last a little last week the beach fishing has been a bit trying. Fishing early morning or late in the afternoon has been the best bet and teamed with the higher tides has seen some good results. Captures of good sized whiting have been reported on lightly weighted fresh worms from both Castaways and Sunrise beaches.  Taking the first cutting when you get to Noosa North Shore and heading down towards the mouth has also seen some good elbow slappers. Flathead are also in good numbers along the beaches with plenty of large fish out of the rivers and feeding along the shoreline.  There has also been a report or two, of tailor and smaller jew coming from north of Teewah to Double island. Pilchards, mullet fillet and bonito fillet have been great baits.   The dart are still in good numbers with plenty on small to medium fish for the kids to catch in most of the closer gutters.

In the Fresh; water quality will improve as flood waters recede. Deep diving lures including Lively Lures Micro Mullet and Eco Gear CX 35HS have been working well along the drop offs at Lake MacDonald and Borumba dam. On the surface the low light periods are your best bet try lures like Lucky Craft Sammy 65 or Jackson Risk Bait surface walker.