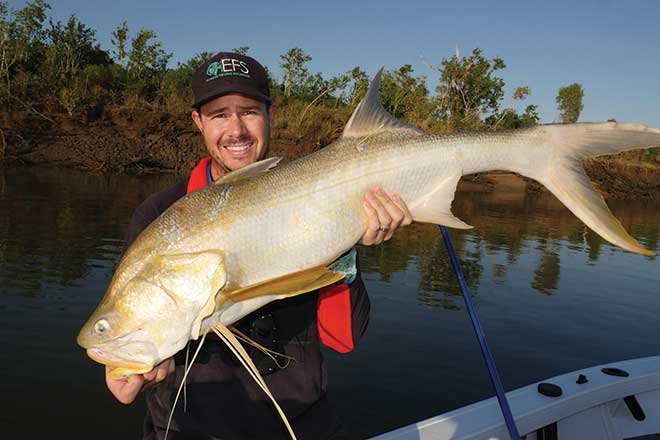 The author held a good-sized king salmon that measured 117cm. It was hooked on the reliable Berkley Gulp Shrimp.

I love everything about fishing, especially in the Capricorn Coast area and am always on the lookout to broaden my skills. From offshore bottom bashing and slow-pitch jigging to chasing barramundi, threadies and fingermark in the estuaries, I love it all. So without further ado, let’s get stuck into what’s been happening here on the Capricorn Coast. November is now upon us and the most important thing to happen this month is barramundi outside of designated impoundments are off the radar from November 1 to February 1 next year.

Yep, old pink eyes need a spell to do their best to repopulate the estuaries throughout the area. So what do you do with all that barra gear? Pack it away for three months and let it collect dust? Heck no. If you want your barramundi fix, then a couple of great impoundment options aren’t far away. Lake Awoonga is only a short drive from Gladstone – Carpricorn Coast.

The dam is in its rebuilding phase after past flood events washed out a lot of the resident barramundi. However, barra are still there to be caught if you look in the right places. Another little gem that’s showing real promise is Lake Callide. Only 12km from Biloela in central Queensland and 90km southwest of Gladstone, it’s not that far from civilisation.

A good mate visited Callide recently and did really well on barra in the 70-80cm bracket. He’s been nailing quality yellowbelly too, and these are proper tanks to keep you interested between the barra bites. At the time of writing, we are receiving a substantial amount of rain, so it will pay to check the conditions of whichever area you plan to visit before making the drive.

If fresh water isn’t your cup of tea, what else can you chase with those barra setups? That’s an easy one. The whiskered speedsters will give you a workout. I’m talking of none other than king (threadfin) salmon. Threadies are a ball of fun. Their ability to change direction at pace keeps you on your toes throughout the entire fight.

King salmon have come a long way in our area since the introduction of net-free zones two years ago. Side-imaging and down-imaging sounders mean that we recreational fishers are well aware of thready numbers throughout the area. This technology is impressive to say the least and being able to distinguish one species from another is next level.

About 80 percent of the estuary fishing I do these days involves finding the fish before throwing a lure. In days gone by, blind casting was the only way to find productive areas. However, it can still be very frustrating, believe me. Finding the fish is the easy part. Some days you wish you didn’t know the fish were there as they swim around your lure all day.

I guess you’ve got to remember that learning from fish-less trips is as important as learning from the red-hot days. Working out what triggers a bite or what has shut them down will make you a better fisher for the future, I guarantee it. So what’s the best technique to land yourself a king salmon?

I have had the most success with prawn-imitation lures. Number one on the prawn list would be the 3” Berkley Gulp Shrimp. They don’t have any fancy tail kick or moving feelers but they do work. A friend of mine can’t get his head around how they work. “They look like a stick” he reckons.

A mixture of the scent they are infused with and how you work them gets the bite. Two or three hops followed by a pause has been the most effective. About 90 percent of the time the lure gets eaten on the drop. Two other prawn options that have worked are the Zerek Live Shrimp and Atomic Plazos Prong.

The Prong is one of my favourite lures to rig weedless and work through heavy timber. Another option worth exploring for threadies is vibration-style lures. Threadybusters have caught their fair share in the past but the vibe I like using these days is the Samaki Vibelicious Thumper Tail.

This lure has a fantastic design and vibes on the lift with tail thumps on the drop. So what else has been happening of late? Offshore fishing has been pretty damn good and most boats heading wide have been getting into nice red fish. Over the past few months we have enjoyed great patches of weather for heading offshore, which is nice for a change.

I recently had a couple of good mates visit for a fishing holiday. I don’t get to fish with them much these days, so I was pumped. The weather for the selected days wasn’t the greatest to head out the front and would be lumpy but manageable. We left the Keppel Bay Marina around 4am and had a drop on our first mark just as the sun was coming up.

It didn’t take long to put a quality large-mouth nannygai in the box. The next fish was dropped and the spot went cold, so we moved on. We started spot hopping in the average conditions. The big tides and a bit of wind made drifting difficult but the use of a parachute anchor slowed us enough to be able to reach the bottom.

By the time we packed up and started to head home, we had half a dozen quality large-mouth nannygai in the Esky along with all the other usual suspects. A good reward for putting up with the wind. Here on the Capricorn Coast we have a good supply of wonky holes, and that’s what the majority of these fish were caught off.

There has been a bit of chat lately about wonkies but for those who have never heard of them, they are basically an underwater spring that pops through the seafloor. Through underwater filming and research, I believe most of the wonkies I’ve found are inactive. Some of them even have irregular coral/fern-type growths in them.

They are fascinating bits of structure regardless. Our main aim is to not flog the guts out of our spots. We have a couple of drifts, pull a few fish and move on. This practice will keep those marks sustainable for future trips. I made the mistake one day of not paying attention while we were fishing a wonky and hooking up to good fish.

A boat snuck up on us and I couldn’t get off the mark in time. The boat motored around for a few minutes and then dropped the anchor. To make matters worse, it looked like it radioed another boat over to the position. I wasn’t impressed.

I’ve been back to this spot several times since and it’s now barren due to over-fishing. A harsh lesson to learn. All the inshore grunter spots seem to be fishing well. Corio Heads, Finlays and the Pinnacles have been the pick of the locations. Good-old pilchards and squid on a paternoster rig represent a reliable method.

Grunter have also been responding well to plastics and slow-pitch jigs, which is good fun. Just five or 10 years ago, if you told someone you were off to target grunter on artificial baits you would have been laughed at. These days it’s a pretty common practice.

With the rain that’s falling, I reckon it’s time to dust off the crab pots. I don’t usually worry about crabbing until we get our first lot of decent rain. I’m sure the muddies will be firing up with a bit of fresh and water temps on the rise. We should see our first proper run since the colder months. Along with the crab pots, you should grab the cast net that’s been hiding in the shed.

Even before this rain, we were getting great reports of prawns throughout the local creeks. When launching the boat in the Fitzroy River of late, cast netters have been standing along the pontoon gathering their live prawns for the day. Even when working the drains I could see plenty of prawns flicking on the surface.

No wonder the threadies have surged in numbers. With this bit of fresh water the prawning should only get better. Well that’s it from me for this month. It’s time to put down the keyboard and go and get the rods sorted.

Until next month, stay safe and fish hard.